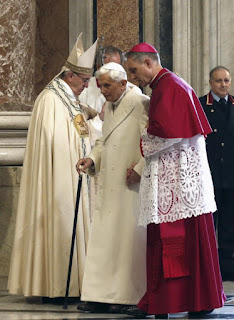 With all the hand-wringing this week about women deacons, one significant change to canon law has been largely overlooked.

It happened in 2009, when Pope Benedict issued a brief Motu Proprio that clarified the different roles of the three levels of clergy.

Having heard the views of the Congregation for the Doctrine of the Faith and the Pontifical Council for Legislative Texts, and after inquiry among my venerable brethren, the Cardinals of Holy Roman Church in charge of the Dicasteries of the Roman Curia, I decree the following:

Art. 1. The text of can. 1008 of the Code of Canon Law is modified so that hereafter it will read:

“By divine institution, some of the Christian faithful are marked with an indelible character and constituted as sacred ministers by the sacrament of holy orders. They are thus consecrated and deputed so that, each according to his own grade, they may serve the People of God by a new and specific title”;

Art 2. Henceforth can. 1009 of the Code of Canon Law will have three paragraphs. In the first and the second of these, the text of the canon presently in force are to be retained, whereas the new text of the third paragraph is to be worded so that can. 1009 § 3 will read:

“Those who are constituted in the order of the episcopate or the presbyterate receive the mission and capacity to act in the person of Christ the Head, whereas deacons are empowered to serve the People of God in the ministries of the liturgy, the word and charity”.

I posted it on my blog back then, and cited this story from Catholic News Agency:

This morning the Vatican published a Motu Proprio from Pope Benedict called “Omnium in Mentem” and dated October 26. According to J.D. Flynn, a canon lawyer for the Archdiocese of Denver, the new document clarifies the nature of a deacon’s orders and the impact of defections from Catholicism on the validity of a marriage.

“Omnium in Mentum,” roughly translated as “Everything in Mind,” deals with two unrelated topics, a fact that caused Flynn to observe that it’s probably easier to publish one Motu Propio than two.

The first issue addressed by the Motu Propio is the role of the diaconate.

Part of the current canon “describes sacred orders as participating in the headship of Christ,” Flynn explained. “The Motu Proprio clarifies that priests and bishops participate in the headship of Christ ‘in persona Christi,’ whereas deacons serve the Church, the people of God, through the ministry, services, or ‘diaconias’ of liturgy, word, and charity.” Thus, Flynn said, the document emphasizes that there is a “clear distinction between the diaconate and the presbyterate.”

“The distinction is between the deacon who acts “in imago Dei” and the priest who acts ‘in persona Christi,’” Flynn explained.

What this means in layman’s terms is that “we see the diaconate as a unique ministry unto itself and not simply a step along the way to the priesthood,” he added.

Deacon William Ditewig at the time offered this analysis:

From my non-canonical perspective, it seems that what is happening with this motu proprio is that the teaching of the Catechism is now being translated into the law itself. It was major point of my own doctoral dissertation that the theological and canonical language developed to describe ordained ministry over the last millennium or so has really been language related to the sacerdotal orders of bishop and presbyter, and since there were no “permanent” deacons of theological significance, to apply such language (such as “in persona Christi”, or to refer to “sacra potestas” (sacred power) can be problematic when applied uncritically to the diaconate; that since we are NOT sacerdotal, a specifically diaconal theological language should be explored and developed. It seems to me that the kinds of distinctions being offered, first in the Catechism and now in the law itself, will ultimately help in this process.

The problem, of course, is that this is rather new territory and the language being used does not have a long history of interpretation like the sacerdotal terms have. The classic problem, which the International Theological Commission attempted to describe, is between seeing the overall UNITY of the three orders of ordained ministry (how we are all united in a single sacrament of Holy Order), as well as recognizing the very real distinctions between them at the same time. Bishops, for example, are MORE than just presbyters who have been given greater jurisdiction; it has a sacramental identity in its own right. This was a major development at the Second Vatican Council. And, of course, deacons are not priests: we never serve — and cannot serve — in offices that require priesthood: diocesan bishop, for example, or pastor, or judicial vicar. With the renewal of a permanent diaconate at Vatican II, the millennium-long paradigm of “ordination-means-priesthood” was broken. We’re now trying to describe and define what that change actually means.

I’ve already had several e-mails from people suggesting that perhaps this opens the door to ordaining women as deacons. Certainly this becomes much more imaginable if the church adopts a more “each-order-is distinct” approach over the “all-orders-are-essentially-one” approach. Of course, as with most (all?) Catholic theology, we generally adopt a “both-and” approach: there is both unity AND diversity within the relationships of Orders. Whether this means that we might open the door to ordaining women as deacons (because deacons are not priests) remains to be seen.

Another interesting wrinkle: the phrase about priests and bishops “acting in the person of Christ the head” can be interpreted as gender-specific, since Christ is male; the distinction relating to deacons, however, more broadly refers to simply serving the “people of God.”

Holding down a real job can get in the way of wasting my time blogging. Posting news and analysis every day is taxing.

As in most areas of Catholic life, Pope Francis has made my job easier: simply do the same thing every day! So, dear readers, I hereby present today's Catholic news. Simply access this post every day and you will be up-to-date:

Today, Francis said and/or did something shocking and/or scandalous, throwing Catholic practice and/or teaching into turmoil.

Mark Shea and/or Jimmy Akin and/or Simcha Fisher and/or Fr. Longenecker assure everyone that Francis didn't say that and/or he said that but it doesn't matter and/or Catholics have always believed and/or done this.

George Wiegel is writing a 1,000 page book all about it.

No one in a diocesan news bureau cares enough to write about it, let alone denounce it.

Two to five bishops around the world lament it, in very measured terms.

Everyone (except those two to five bishops) agrees that the real problem is that there are too many traditional Catholics, and that they won't shut up. Therefore they ridicule and scold them.

Meanwhile, traditional Catholics pray, go to confession, and drink, in random order. Their confessors tell them to have more faith and patience.

In the same Q&A session, His Holiness said that women cannot preach the homily at Mass because they do not stand in personae Christi. Deacons preach homilies at Mass. In addition, Cardinal Mueller has rejected the notion. Then-Cardinal-Ratzinger, who lead or signed off on the ITC report on the matter, also gave it a negative opinion (that is, women's ordination to the deaconate). I do not see this changing without fundamentally altering Holy Orders itself. In addition, there is no way to deflect charges of discrimination in allowing women to do part of Holy Orders, but not the part that allows them to wield power or become "bishops and popes." The entire idea is foreign to the early Church, and those deaconesses have long since evolved into the religious orders of sisters and nuns that we know today.

A couple of months ago Fr John Hunwicke posted on his excellent Mutual Enrichment blog a five-part article 'Diaconia in the Tradition of the Roman Church'. He demonstrates that the deacon's function has always been primarily cultic rather than philanthropic and his service is first and foremost to his bishop. For anyone interested in the subject this is a must-read. He doesn't mention Ms Zagano; I don't imagine shrill American feminists are on his radar.

When the Anglican Church first ordained women deacons in 1987 it already had 'deaconesses' but these were not in Holy Orders; they were analogous to 'consecrated women'. The new women deacons for the most part did not see their status as permanent - they intended to be priests and in a mere seven years their demands (stridently advanced) were met. There's a lesson here.

The non-ordained ministries of lector and acolyte instituted by Paul VI in 1972 when he abolished the minor Orders are reserved to men. This is one reason why they have remained (unlike the diaconate) transitional. An instituted acolyte is ex officio an extraordinary minister of Holy Communion and the bishops see EMHC as 'jobs for the girls'. Ironically, if more laymen were instituted as lector or acolyte (as Paul VI probably intended) then there would have been pressure to open these ministries to women. To do so would have not have directly affected Holy Orders and could have been done motu proprio.

I get the impression that Pope Francis is not interested in gender politics, and there is more than a touch of Latin American machismo about him, which feminists have noticed and deplored. And even if he wanted women deacons, it would signify a break with Tradition which he is probably not competent to authorize.

And the Roman Tradition, as Fr Hunwicke reminds us, is considerably older than the canon of Scripture. What the Greeks do is their affair.