THE VIEW FROM THE PRIEST: EF/OF; AD ORIENTEM/THE OTHER WAY 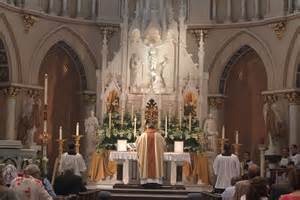 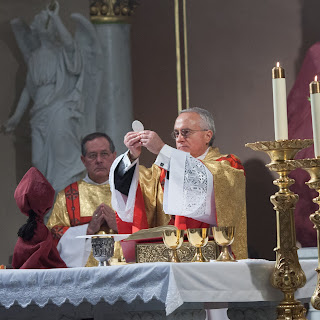 For me the Mass is the Mass in whatever form. While I find the Eastern Rite Masses a bit too mystical for me, I see it as I would our Latin Rite forms. For me there is no difference in the effects of a Mass celebrated facing or away from the congregation; in Latin or the vernacular; in the OF or EF forms and now in the Divine Worship, the Missal Form. The Eastern Rite Masses accomplish the very same things as the Western Rite forms.

I see the Divine Worship, the Missal as the template for the reform of the OF Mass which needs some help along the lines of this new Missal approved by Pope Francis.

I love the Latin especially when all in attendance love it or at least appreciate it.

I love the vernacular because of the issues of comprehension and that the vernacular is the language I use when I pray my personal prayers and devotions. It facilitates my participation in the graces that God offers during Mass.

When I celebrate the EF Mass, I feel connected to my past and the Church's long and wonderful history of salvation.

I understand most of the revisions of this Mass as experienced today in the OF Mass and I am in complete agreement with the new and glorious revised English translation of the Mass which recovers the spirituality of the Mass as it was revised in Latin after Vatican II.

I prefer the OF Mass to be celebrated ad orientem for the Liturgy of the Eucharist as Cardinal Robert Sarah, Pope Francis' pick for the Prefect of the Congregation for Divine Worship has more than strongly encouraged in the past and quite recently.  At St. Joseph Church, we celebrate Mass this way each Sunday at our 12:10 PM Mass and use the full length of the altar railing to distribute Holy Communion to kneeling communicants. These two reforms of the OF Mass would go a long way in recovering a sense of the sacred and reverence that we have lost in the last 50 years of useless experimentation.

From my perspective as a priest, I am less distracted in prayer by what is going on in the congregation when I am praying the Mass with the congregation. I cannot tell you how many times in my 36 years as priest that as I am praying the Eucharistic Prayer and even during the words of consecration, I see people getting up, going to the restroom or leaving for whatever reason or returning to their pew.

When I pray ad orientem all these distractions are removed from me and any hostility I have towards those who are clueless about Mass etiquette and reverence!

I prefer Vatican II's theological underpinnings of the Holy Sacrifice of the Mass. As with the EF Mass it is both Sacrifice and Eucharistic banquet. But our Lord is present to us throughout the Mass in other ways. He is present in the clergy and laity who gather for Mass. He is present in His Word especially the Gospel which contains His Words. He is present in the person of the priest who acts in Persona Christi and Head of the Church. Finally He is present in a specific and transubstantial way in the Sacred Species of Mass. His Body, Blood, Soul and Divinity. His one Sacrifice, now a part of eternity, is completely present in an unbloody way, a glorified way. And the Banquet of the Eucharist is a sign that we are in full communion with the Church on earth (Militant); the Church in Purgatory (Suffering) and the Church in Heaven (Triumphant).

It doesn't get any better than this in the various forms of the Mass in the West and the East!
Posted by Fr. Allan J. McDonald at Saturday, May 28, 2016

Fr. McDonald, the Missal obviates the comprehension issue. FAIL. Ad orientam has 1900 years of both the Latin and Eastern liturgical tradition behind it, versus populum has 50 years of left-wing loonism behind it. FAIL. I admire you and your work on behalf of sacred tradition. Please don't fall into this faux equivalence. You know as well as I do,that both developments, the vernacular and group hug approach,fostered the liturgical rot we are just beginning to repair.

This reads like an open letter of introduction to your new parish. If not, i should be.

Does the vernacular aid comprehension? The superficial meaning of the words may be better understood, but after half a century of an almost exclusive use of the vernacular, do congregations (those that remain, that is) have a better comprehension of what the Holy Sacrifice is really about? I would argue that they do not, and a considerable number see the Mass as a sort of group activity with some bread and wine thrown in for symbolic reasons.

One of their favourite songs goes after this fashion: 'Let us break bread together on our knees (bis)/When I fall on my knees with my face to the rising sun ...'. Nothing wrong with Negro Spirituals, of course; Michael Tippett used them to great effect in his oratorio 'A Chlld of our Time'. But these are not the sentiments of 'Pange Lingua', 'Panis Angelicus' or 'Ecce Panis Angelorum'. With respect to the last-named, how many Catholics will hear the Sequence 'Lauda Sion' at Corpus Christi? Precious few, I imagine.

Bingo! I recall that when Mass was exclusively in Latin, armed with my Missal, I worked hard to think about what was happening. THe Mass was presented in such a way that even as a child, I knew I was in the presence of the sacred, the divine. Today, with the "new and improved" liturgy, it's just yada, yada, yada, snore, snore, snore. There is nothing to work for, to strive for. I think the sentient amongst us know the Church has done an abysmal job teaching the Faith since Vatican Disaster II All they say is , love, love, love. Well here's a news flash: Protestants love, Jews love, Atheists love. If that is all you're selling, you're running on empty.

I must admit I attend an Anglican-Catholic parish in my town because we have no TLM masses in the diocese or an S.S.P.X. church here, I can tell you most of the Catholic churches here are hand holding, kiss of peace, folk and rock music masses and I cannot attend such outright silliness and childish behavior I'am an adult after all. Having said that, the Anglican-Catholic church I attend you would think you were in 14th century England before the Reformation! Stunning Gothic vestments, Gregorian chant in Latin, bells, incense, Mozart, Palestrina, altar boys only, kneeling, communion on the tongue with altar boy holding paten, deacons, sub-deacons, entire Mass in Latin and this is an Anglican-Catholic parish!! Yes they are NOT in communion with Rome but why can't we do what they are doing, they are more Roman and Catholic than we are, how sad and hard for me to say that, but it is the truth!