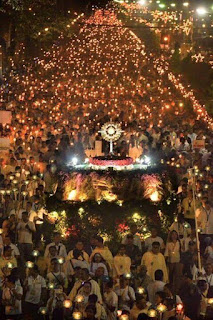 Let's look at the Philippine's Church of this year with the 61st Eucharistic Congress. A Catholic country can pull this off and they did so in a wonderful way. Catholic Processions capture the imagination of people just as parades do. I believe this happened a couple of nights ago. There were more than 2 million Catholics involved: 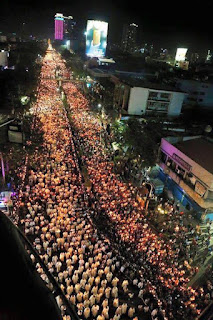 Then last night (Saturday night) I watched the first half of "The Nun's Story" with Audry Hepburn on Turner Classic Movies. Oddly enough, or humorously enough, Sally Fields of "The Flying Nun" fame introduced the movie and spoke highly of it in the sense of allowing people to see what a group of woman who sacrificed much do, something that most people never had seen.

The hosts doubted that a movie like this could be made today. Certainly there are cloistered religious orders of women who have maintained many of the liturgical traditions captured in a stunningly marvelous way in this movie, but few have. The movie also captures the rigidity of religious life of this period and how the individual self was denied. It was done so not in a mocking or castigating way but simply to show the beauty of this way of life, this way of sacrifice, this way of humility closely related to humiliation, kissing it but not crossing the line.

I thought to myself as I watched the harsh discipline of religious life of that period as depicted in the movie which was based upon fact but elevated by the steroids of drama, how much this way of life is needed to counter balance the licentiousness of life today with its haughtiness and self-fulfilling aspects to the detriment of the common good. The idea of the pursuit of spiritual perfection would be scoffed at today.

But the liturgical scenes depicting the various aspects of a woman becoming a nun were magnificent. The interior shots of the movie were done in a movie studio in Rome, Cinemacitta. Thus even the church were the liturgical professions were filmed was but a set. The movie was nominated for many academy awards and certainly the set designer must have won a few. It looks like  a Gothic chapel, simple but magnificent with its pre-Vatican II altar and sanctuary. This movie catapulted Audry Hepburn to stardom as a serious, dramatic actress. She is wonderful and believable in the movie.

The clothing ceremony was believable because there was no clapping which is so often found at ordinations etc these days. Instead one senses the seriousness of the commitment being taken by the young women, albeit it is a movie but the scene would have been based on such ceremonies. Also, the large number of sisters, which would have been the case in most religious orders in those days - turned upside down after Vatican II and only now, with the number of traditional orders rising are vocations to the religious life blossoming once more. The orders that ditched the habit.

Apparently the book and film are loosely based on the time that Marie Louise Habets spent in the convent. Her reason for leaving the order was different from that portrayed in the film. Although it did involve difficulty in obedience, she said that resulted from the fact that her father was killed shortly after the Nazi invasion of Belgium and she developed such a hatred of the Germans that she joined the resistance, petitioning for a release from her vows when she found that she couldn't obey the faith in the necessity to forgive the Germans.

She did receive applause, which she did not externally appreciate, from the ward of sick women where she worked. That setting, though, was appropriate for applause, not the chapel. And yes, you are right, applause at these kinds of ceremonies shows how superficially people take the commitments being made by priests or religious. The movie shows the seriousness of religious life and its graduality and promises, its process to solemn vows.

I remember one thing that the Mother Superior told the novices in the movie last night, that being a nun is not easy and one must be AGAINST the world and that she said is very difficult for anyone to do. Having said that I have so much respect for our sisters prior to Vatican II they truly were brides of Christ. This took place in Belgium and prior to the Council and such Mass attendance was at 95% amazing, now Mass attendance in Belgium after the Council is at a stunning 5% yes 5% folks so if you would like to continue to live the lie that the Second Vatican Council was just fantastic take a look at Belgium, and by the way the largest religious group in the capital Brussels is you guessed it: ISLAM and folks it cannot be stopped. Pray for the continued success of groups such as PEGIDA in Germany, Partij voor de vrijheid in Holland, The Northern League in Italy, Front National in France, these parties have the guts and will to stop the ISLAMIC invasion of Europe!

Belgium is an example of how Catholicism which appears deep-rooted can be eradicated in just two generations. Two modernist cardinals (Suenens and Danneels, the latter a close crony of Pope Francis), the collapse of Catholic education, a liturgical free-for-all in the spirit of V2 and, hey, job done. The Devil could hardly have organized it better.