WHY ARE YOU BOTHERING ME WITH ALL THIS, IT'S TOO MUCH WORK!

Continuing with my previous blog, some within my parish have asked me why I'm bothering them with trying to teach them their Latin parts of the Ordinary of the Mass despite the fact that the Second Vatican Council's document on the Liturgy explicitly states they should know it. They say that they now have to "think" about what they are saying whereas with the lame duck English, they didn't have to think! Yes! They didn't have to think, to reflect, to wonder, to engage in mystery, to be surprised by grace.

Yes, many of us have been doing things by rote and in an unthinking way for much too long. It is a general human tendency with ritual and habit to do so sometimes. But shouldn't we be thinking and praying and not just doing things through unthinking rote? Are we willing just to settle for that? I hope not!

Others have asked if learning the Latin is mandated. I say, "no," although I always point to what the Second Vatican Council teaches about Latin. As pastor, I have every right, though, to implement this even if no other pastor in the world thinks it is important. There is diversity here in terms of the entire issue of language in Latin or Spanish or what ever language a parish uses and I recognize that.

The same holds true for "ad orientem" worship (priest facing in the same direction as the laity, facing the liturgical east). This is not forbidden with the Ordinary Form of the Mass. The bishop in Oklahoma City has decided to implement it in his Cathedral. That is his prerogative as bishop. Fr.Jay Scott Newman, pastor of St. Mary Church in Greenville, SC, after a lenghty catechesis, has implemented Ad Orientem in his parish. As pastor he had the right to do so. Pastors also have the right not to do so, I might add.

But the greater issue, I believe, is that we need to take the time to think about what we do and what we say at Mass, in particular, how we participate, sing, respond, listen and the reverence that is due to Jesus Christ truly present in the Most Holy Eucharist, in Holy Communion. Is our interior and, yes, exterior disposition one of reverence, awe, wonder and gratitude; or is it one of casual complacency manifested both from the perspective of the interior and exterior
characteristics of our faith, devotion, reverence or lack thereof?

To conclude, I also would point out that in the Extraordinary Form of the Mass, what the Second Vatican Council says about the Latin, that the laity should be able to say and sing out loud all the Latin parts that pertain to them is absolutely necessary. No longer are the laity allowed to just let the altar boys or the choir speak or sing for them--it is their duty to join, out loud and not just quietly. So let even the traditionalists get real about their active participation and what the Second Vatican Council teaches them too! Active participation can be quiet, where appropriate and can be out loud where appropriate. The two are not mutually exclusive. Those who love the "quietness" of the EF Mass need to know that in some cases we need to let that go and do their part out loud as the Second Vatican Council's document on the Liturgy says to do even in the EF!

Just a few photos on thinking about what one is doing at Mass--EF Solemn High Requiem Mass on All Souls' Day, 2009. I'll let the pictures speak for themselves> This Mass was our first Solemn High more than 45 years. It took a great deal of practice, work and energy for the choir in particular, but also the priest, deacon, subdeacon, master of ceremonies, altar boys and last but certainly not least, congregation. There were more than 300 people present at a 7:00 PM Mass that was not obligatory!: 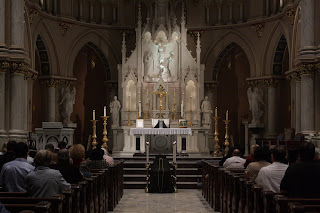 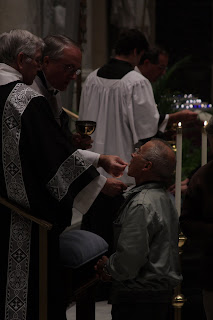 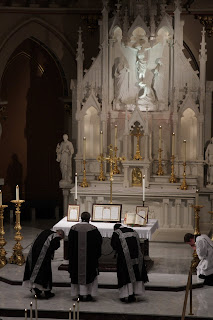 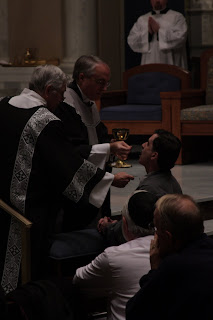 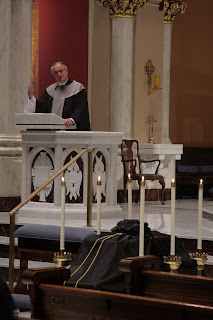 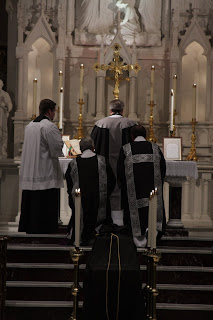 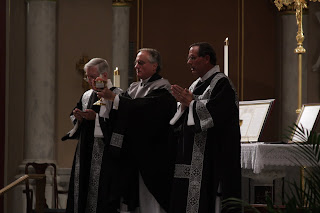 See my comment about whining parishioners in the posting on the Children teaching the adults the Latin responses...

YES YES YES!! That's the whole point now isn't it? Think about what you are doing. Center yourselves in your pray. Focus heart and soul on your words, your thoughts, you body language and PARTICIPATE IN THE SACRIFICE.

My heart cries out in anguish as I watch week after week at far too many people who are at Mass to get their ticket punched. "I fulfilled my obligation, I'm going to heaven." Meanwhile their minds are on their taxes and they couldn't tell you what color vestments Father wore.

Please Father, stay the course and let the Holy Spirit guide you. You may even lose some parishioners in the end, but the ones you keep will be much better Catholics in AND out of Church.

My Lord forgive us, for we shame you with our selfishness. May the Martyrs of Our Faith have mercy upon we who are too blind to make the smallest of sacrifices.

Hehe!! Just noticed, I'm in that first picture of the Requiem Mass. Well the back of my head is anyway, LOL.

Agreed fully, the so called "silent" Mass was never the intention of Holy Church :)

Undoubtedly there were some "silent Masses" way back when, but I never see one nowadays. Every TLM I attend is a glorious sung Mass with the people joining not only in singing all the dialogue responses but also the Gloria, Credo, etc. Everybody "into" the liturgy, none of the 30-yard stares seen at ordinary Sunday Masses.

Indeed, I think it's mainly in the TLM that Vatican II has been implemented pretty well. Which seems appropriate, since the recommendations of Sacrosanctum Consilium were directed at active participation in the traditional Mass, not in some new order of Mass that the Fathers of the Council surely did not envision.

Which brings to mind the standard quip that Vatican II has done the TLM a lot more good than the Novus Ordo. And the serious comment that to see genuine active prayerful participation in his diocese, the typical bishop must go to a TLM.

But I believe the implementation of the new translation, with its accompanying English chant resources, gives hope for future active participation in the ordinary form as well.

Some of us want to participate loudly st EF Masses in Latin, but are unsure of how and when it is apporpriate, because it is still so new to us.
Perhaps someone can teach us.
We just want and need some instruction. Perhaps well trained and loud people planted in the congregation or perhaps Masses to teach the rubrics of the EF (similar to what is done for RCIA students) or via some othr method. Help us, frequently remind us, and be patient with us.
Thanks.

For the EF Mass it is important to have your own Missal that has all the parts of the Mass. The parts that are for altar boys or for choir are the parts of the laity, all of them, including the prayers at the foot of the altar, the Kyrie, Gloria, Credo, Sanctus, Amen, Agnus Dei, Domini Non Sum... as well as all greetings directed to you including the preface dialogue.

It is just a matter of feeling comfortable saying and singing the Latin out loud and as we continue to implement it in the OF Mass here in St. Joseph, that'll come to you even easier!

To Pater Ignotus, poor parish, can't afford--but will take your charity for some! Southern Orders

I just notice, much to my embarassment, that the last picture of the "Ecce Agnus Dei" has me holding a ciborium that has two crude attachments--the "Ecce Agnus Dei" in Latin with its response and the "Corpus Domini..." formula for distribution of Holy Communion. I had not memorized these completely at that time, but since have, and no longer need these "cue cards!" So to all my fans who were under the delusion that I could do these by heart, sorry--,but I can now!
Fr. Allan McDonald

Poor Parish? How much did the recent renovations to the church cost? And you can't afford $50.00 for the proper candles called for in the rite? Or is this just an example of "Extraordinary Form" pick-and-choose, make it up as you go, ignore the rules, deprive the people of the liturgy to which they have a right?

To PI: In one the rarest moments you are correct as unbelievable as that is. I will certainly place in our budget for next year's EF Solemn High All Souls Mass the appropriate bleached candles. You are absolutely correct in pointing out the fault that lies there-in of "pick and choose", "ignore the rules" yady, yada way of doing things that so many do today, especially with the OF Form. I appreciate the correction! In addition, I'm sure the day will come when I will be requested to do an EF Funeral, so I need these. They will indeed be place in our very frugal budget.
--southern orders

Father; As some one who has attended your EF Masses since 2007, trust me, we all knew about the cards taped to the base of the ciborium. Most, like I, probably smiled a little smile to ourselves and inwardly thanked God for a Pastor who cared enough to make sure he got the words right. Should we fault a man whose legs require him to use a cane to walk?

Pater Ignotus, Do you have an unusually large number of proctologists starting to attend your Church?

Father, you are an inspiration..Many, many parishes wish and hope for a Priest like you. For any criticism you receive on Latin and reverant Liturgy, be sure their are millions who know not of you or a way to show their support for what you do. You are a true Priest with appropriate pastoral concerns and ways for us to actively participate the way we are supposed to. Please spread the word to your fellow Priests and encourage them to TRY to do these things in their parishes as well.