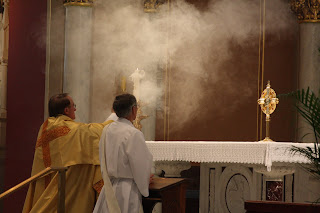 Fr. Peter M. J. Stravinskas has recently pointed out in the Jesuit periodical, America what everyone who has read the Document on the Liturgy Sacrosanctum Concilium from the Second Vatican Council already knows:

Paragraph 36 of Sacrosanctum Concilium, states that, “The use of the Latin language, with due respect to particular law, is to be preserved in the Latin rites....Care must be taken to ensure that the faithful may also be able to say or sing together in Latin those parts of the Ordinary of the Mass which pertain to them.”

In other words, the Council Fathers, not being liturgical elitists, thought that the laity in the pew was smart enough to learn their Latin parts. What a radical breakthrough!

In terms of the revised English responses of the faithful, to the greeting "The Lord be with you, the following is most important from a sacral point of view:

And with your spirit. The earliest translation of the Mass from 1965 actually used this wording. St. John Chrysostom explains that when the people respond in this way they are affirming the ontological change that has taken place in the priest by virtue of the Sacrament of Order, thus enabling him to call down the Spirit upon the elements of bread and wine, transforming them into the body and blood of Christ.

What most Catholics don't know is that there was a very unfortunate agenda operative in the elite group of scholars who translated the Mass into English in the 1960's. I was taught in the seminary that there was a desire to neuter some references to the Church and not to offer superlative modifiers to the saints and other concepts, like, ever-glorious, most holy, etc. Repetition had to be avoided at all costs.There was a desire for "street-talk" in the Liturgy, not some highly exalted English that the person in the pew couldn't understand. Now keep in mind for centuries the person in the pew was exposed to Latin and the person in the pew wasn't complaining. But nonetheless, the linguists of this era thought they knew better. This is what Fr. Stravinkas has to write:

"When I first reviewed the translation guidelines sent by ICEL, I was disappointed. Ideology, it seemed, had taken precedence over accuracy. Anima was not to be rendered as “soul,” I was informed, because doing so would set up an unnecessary dichotomy between body and soul. No feminine pronouns were to be used for the church, and common words were favored over precise theological or liturgical vocabulary. The goal was to capture the general meaning of the text, rather than a faithful rendering of a rich and historically layered Latin prose."

At St. Joseph Church, we are beginning what the Catholic Church in all English speaking countries will be doing--we are making a course-correction. I have decided as pastor, that we will follow Vatican II by first honoring our Latin Rite heritage by learning what the "standard" language of the Latin Rite Mass is, Latin! We will do so with the laity's responses in the Mass. Eventually, when it becomes licit to do so, we will implement the new English translation of the Mass. Then in about one year, I am asking my parishioners to reflect on what we did and are doing and to ask this question to themselves and strive to answer for themselves: Are we more appreciative of the sacred and show more respect now for the Sacred, individually and collectively? If so, why?

Lex orandi, lex credendi. The way of prayer is the way of belief--how one prays has ramifications for good or ill on how one believes. Think about it.

Very interesting! However, the document seems to allow for ALL the parts of the Mass to be in the mother tongue so long as approved by ecclesiastical authorities.

Also, what do you think of this quote from the document:

100. Pastors of souls should see to it that the chief hours, especially Vespers, are celebrated in common in church on Sundays and the more solemn feasts. And the laity, too, are encouraged to recite the divine office, either with the priests, or among themselves, or even individually.

I have never seen this practiced in any parish.

To Dan, from Fr. McDonald, that's a tough one. If we only had one major Mass on Sunday, in the morning--then it might be possible to do this. I believe many parishes in the past did so, especially when evening Masses on Sunday were not possible. We do solemn sung Vespers about twice a year within Benediction. We have spoken vespers and Benediction every Wednesday at 5:30 PM--in fact just completed it. So we are striving to follow this, just can't do it on Sunday.

Fr. McDonald, what you're doing deserves wider attention. I have just pointed to it in the comments at

Dan: "I have never seen this practiced in any parish."

At Holy Ghost Church in Knoxville (TN), where on Sunday we have 5 OF Masses in English, one TLM, and one Byzantine divine liturgy--in addition to a Saturday evening vigil Mass in Spanish, Fr. John Arthur Orr (our TLM celebrant) leads sung Lauds at 6 am and Vespers at 5:30 pm (OF in English) daily Monday through Friday. With cope and incense at during the Magnificat at Vespers on solemnities and feasts.

Excellent, I wish some New York parishes would do the same !! Father, I have to say I find it hard to believe this is actually happening somewhere. What has been the response so far and do your fellow Priests find what you are doing in a positive light? Are any considering the same? So many of us feel deprived of the language of the Church, hearing it, praying it, feeling its' unifying force. Attending and EF Mass once in NYC my most memorable moment was when the whole parish sang the Credo in Latin, a few hundred people, robust and confident. The woman in front of me had a Latin /Spanish Missal, mine Latin/ English and we were both singing in unity the Creed in Latin. That is true, active participation. I was moved so much by the experience I wish to hear it this way in every Mass. Unforgettable.