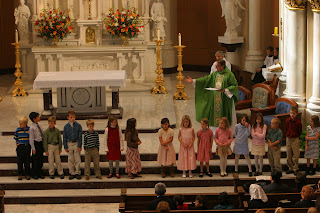 Even though the Second Vatican Council's Liturgical Document, Sacrosanctum Concilium, makes clear in no uncertain terms very, very few clergy or laity bother with or even care about the following: “The use of the Latin language, with due respect to particular law, is to be preserved in the Latin rites....Care must be taken to ensure that the faithful may also be able to say or sing together in Latin those parts of the Ordinary of the Mass which pertain to them.”

However, if you were to ask a rank and file Catholic who actually attends Mass, that person would probably tell you that Vatican II did away with the Latin at Mass. I know that I've had Catholics come up to me after Mass when we have used Latin and said Vatican II did away with that, sometimes in a rather caustic tone! Either they have unintentionally been misled by someone or worse yet, intentionally misled. This is terribly unfortunate, being misled that is.

At any rate, Latin after Vatican II certainly did disappear in many places not because of fidelity to Vatican II but because of infidelity to it. Now, today it is true that the majority of English speaking Catholics do not ask for Latin. I might add that the same holds true for the re-translated English Mass--I don't think the vast majority of English speaking Catholics are asking for it. The same is true of the Post Vatican II Mass, no one amongst the laity in the 1950's or early 1960's was asking for it. It was mandated by the highest authority in the Church.

What happened after Vatican II was that we were asked by the Magisterium to implement the New Mass. Through hard work we did it. Many older Catholic priests have the battle scars to prove it. We've also been asked directly by Vatican II to maintain the Latin. We failed there! It is hard work to do two things at one time, to maintain our mother tongue, Latin and to implement the exception to the mother tongue, the vernacular especially when no one amongst the laity asked for the vernacular to begin with.

In the very near future, we will be asked to implement a new English translation of the Mass. It will be hard work and we will have to lead our people in doing it. But in the meantime we have a splendid opportunity to actually be faithful to Sacrosanctum Concilium as it concerns our mother tongue, Latin. I think it a stroke of genius that we use this unique "interim" period to oust the old lame duck English for the people's responses and chants, and to implement the mother tongue of the Latin rite, which is Latin. Then, when is comes time to implement the new English, they'll have forgotten the old lame duck responses and it will go smoothly. In addition, they'll know the Latin responses which Vatican II mandated them to know. It will have taken us 50 years to do that, but what the heck?

Implementing Latin in a transitional period will be hard work. But it will help us to actually live liturgically what the Second Vatican Council envisioned for local dioceses (Churches) and parishes. Let's do it and have courage and fortitude in doing it. Seize the Day! CARPUS DIEM!
Posted by Fr. Allan J. McDonald at Thursday, January 28, 2010

It is indeed hard work Father, and I applaud you for it, and pray for you daily in your toils.

Let the Holy Spirit guide you, and take not counsel from your fears.

Catholics need to be challenged. It's like exercise for our souls.

I love the picture of the kids teaching the adults!

We had made plans to begin introducing the Latin Ordinary at our Sunday Masses,beginning with the Agnus Dei. We got as far as introducing the Agnus Dei for about three weeks before a few people whined to the pastor about "that Latin stuff at Mass". They claimed they would go to another parish if we kept doing it. The pastor caved and told us to "put it on hold for now".

My point is, those who feel strongly about the re-introduction of tradition to the liturgy need to be as vocal and insistent as those who oppose it. What happened at our parish was that probably fewer than 5 people spoke up and stopped a project that may well have been favored by a large number of parishioners. The fact is, they were singing the Agnus Dei very well, and enthusiatically at that! All it took to stop it was a few people whining to the pastor.