LOOKING AS PAPAL AS EVER AND HEALTHIER THAN WHEN HE ABDICATED, ONE WOULD THINK HE'S MAKING A COME-BACK! 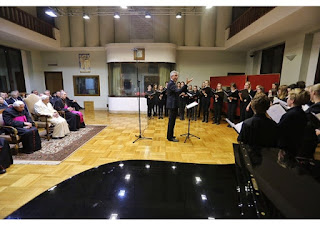 The German choir “Jugendkantorei of Eichstatt Dom”, directed by Master Christian Heiss, is made up of 36 young people between the ages of 12 and 18 years. They are in Rome to attend the 40th International Congress of Young Singers.

The concert program, inspired by Christmas themes, included pieces by Mendelssohn, Brahms and Benjamin Britten. The carol "O du fröhliche” was actually arranged by Mgr. Georg Ratzinger, brother of the Pope, who was also present at the concert, along with Mgr. Georg Gaenswein, Prefect of the Papal Household and Cardinal Giovanni Lajolo, former nuncio in Germany.

The young people performing had faces of radiant joy, as the privilege of performing for the Pope  had only been communicated to them the evening before. At the end of their performance, Pope Benedict XVI thanked them, wished them a Happy New Year and a pleasant stay in Rome.

Is that Pope Benedict's brother to his right?

Yes, that is his brother Georg no doutbt. Boy oh boy do I miss Benedict the XVI so much good was happening with Summorum Pontificum, if only the S.S.P.X. would have accepted the offer to become fully embraced by the Church. Just think of all the good it could have done within the walls of the Church and so many TLM's could have been spread!! So keep praying for His Holiness Benedict the XVI and the return of the S.S.P.X.

I miss Pope Benedict as well. One never properly appreciates what one has until it's gone. ;)

In my head I know I mist somehow accept that Francis is pope but on my heart I keep hoping in some way not knowm to is Benedict still is and that the revolt to replace him with a "team player" for the new agenda somehow failed. All I can do as a layman is to pray. I noticed since the Synod that I pray for "Pope Francis's intentions to the extent that they are orthodox and for Pope Benedict's intentions".

This is Anonymous at 12.42pm. Reposting here with, I hope, typos corrected:
In my head I know I must somehow accept that Francis is pope but in my heart I keep hoping in some way not known to me that Benedict still is and that the revolt to replace him with a "team player" for the new agenda somehow failed. All I can do as a layman is to pray. I noticed since the Synod that I pray for "Pope Francis's intentions to the extent that they are orthodox and for Pope Benedict's intentions".

I still will always wonder what the haters of Pope Benedict the XVI had on him to make him resign????? His favor of the TLM and S.S.P.X. his stunning vestments and his love of the Holy Mass, we may never know.

"Looking as Papal as ever"....what does that mean? What does it have to do with anything? "Looking Papal"? Really?

Some here probably think that Donald Trump "looks Presidential". Many years ago, when I became a Knight of Columbus, I was told that "looks can sometimes be deceiving".

I too find myself confused when I pray three hail Marys for the Pope's intentions because Pope Benedict is on record as saying that he only resigned the day to day management role of the papacy but not the spiritual role. I leave it up to God. I notice that at the opening of the Holy Door, the consistitory appointing cardinals etc, major events in the Church, Pope Benedict is on hand. If he hasn't relinquished the spiritual role maybe it is thought necessary for him to be there? As many have noted, it is a strange situation.