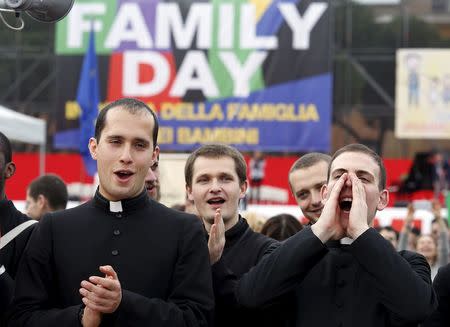 By Isla Binnie and Crispian Balmer

The much-contested bill was presented to parliament last week and is due to be voted on in February, but the government itself is deeply divided over the issue and opponents are hopeful they can sink it, as they have done it the past.

Trains and buses ferried in protesters from around Italy to take part in the event, staged in Ancient Rome's famed chariot racing stadium. A group of black-clad Roman Catholic priests danced the conga, while children rushed around the grassy arena.

"We want the whole law to be withdrawn, no ifs and no buts," said one of the organizers, Simone Pillon, sporting a red bow tie. He took particular offence at a clause in the law which would let gays adopt the biological children of their partner.

Critics say this would encourage surrogacy, which is outlawed in Italy. "We cannot let children pay for the desires or caprices of adults. Children need to have a father and a mother," said Pillon.

Showing how polarized the nation is, Saturday's rally came a week after thousands of people took to the streets of Italy to demand that the "civil union" bill, which relates to both homosexual and heterosexual couples, be approved.

Organizers said they expected more than half a million people would join the Circus Maximus rally, but official numbers were not immediately available.

Italy is the last major country in Western Europe that has not offered rights or recognition to same-sex couples and has been criticized regularly by the European Court of Justice for failing to act.

Prime Minister Matteo Renzi promised to pass a law by the end of last year but has faced fiercer opposition over this from within coalition ranks than any of his other reform plans.

Several government officials, including many from the small New Centre Right party (NCD), took part in Saturday's demonstration, while others cheered it on from the sidelines.

"I fully adhere to the aims of this gathering," Interior Minister Angelino Alfano, who is also the head of the NCD, wrote on Twitter, underscoring the difficulties Renzi faces in trying to secure a majority in parliament.

Italy is a heavily Roman Catholic country and although the church's influence has waned over the years, it remains a formidable social force. The Italian Bishops Conference has come out firmly against the bill and many of the banners on display had overt religious overtones.


A week ago Pope Francis issued a strong reminder of the church's opposition to gay marriage, saying that the traditional family was "the family God wants".

Some protesters echoed his view. "I am a grandfather and this law goes against God and goes against the bible," said Franco Pantuso, 71, a retired waiter from the central city of L'Aquila who had came to Rome especially. "Our children and grandchildren must be protected."

Latest opinion polls say that 70 percent of Italians believe that same sex couples should be granted legal protection, such as inheritance rights. However, only some 24 percent think that any adoption rights should be granted to gay couples.

Just a wild guess...but I wonder if the "black-clad Roman Catholic priests dancing the conga" were protestors who were in favor of the bill.

The National Anti-Catholic Reporter will be in denial

It's wonderful to see such a big turnout despite the fact that Pope Francis was against the rally.

TJM, I signed a petition asking that Catholic Bishops stop granting interviews to the disgusting "National 'Catholic' Reporter. Michael Voris has a link on his Church Militant website.

And the Pope remains silent! It has always been said the laity will save Holy Mother Church not Rome or the bishops and this is proving to be the truth. Pray that our Holy Roman Mass will return one day to our altars, pray for the F.S.S.P., S.S.P.X. Institute of Christ the King they and only they can restore the TLM to us and the Church.