These are pictures from last year's Fauré Requiem Mass celebrated as a Solemn Sung Mass with deacon and sub-deacon. 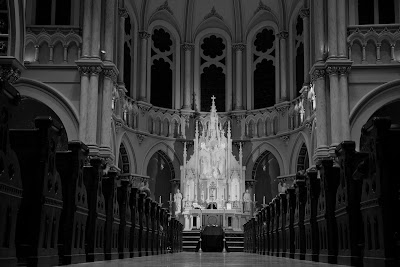 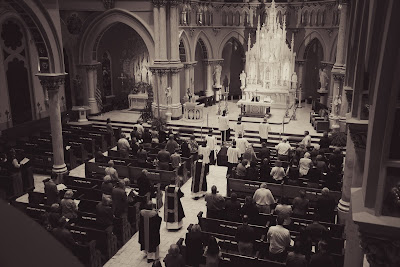 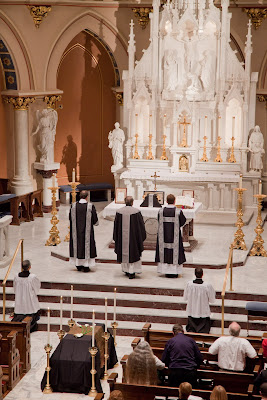 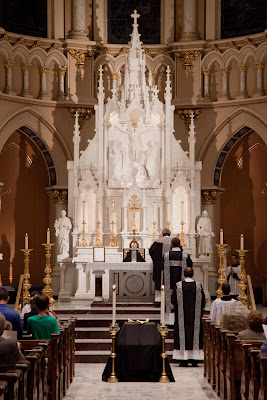 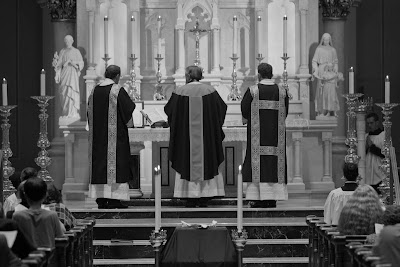 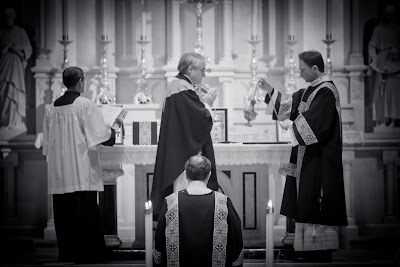 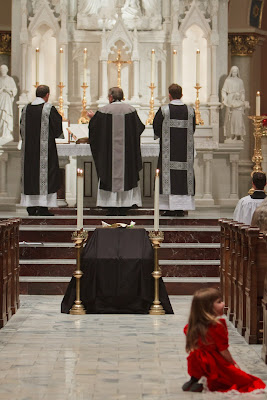 I like the vestments, particularly the differentiation between dalmatic and tuncle. Do you have unbleached candles for altar and catafalque?

We have no unbleached candles. The candles on the altar are actual candles, beeswax, but inserted into a candle looking metal tube which has a spring that pushes the actual candle up as it burns down, so the candles always look the same and burn evenly and we can use more of the candle before disposing of it. The candles around the catafalque are not in tubes and I suspect we could get unbleached ones for these. I'll have a nicer, more traditional looking chasuble for this coming All Soul's Mass. You can see it at the post: http://southernorderspage.blogspot.com/2012/10/the-liturgical-color-black-and-yes.html

I wish that I lived closer! Fortunately, we here in Tampa have just started our own EF mass with Father Clement at Incarnation parish.

Are not unbleached candles REQUIRED by the rubrics for this EF Requiem mass?

Yes, but as Sister Sarah says in Two Mules for her, that the Church offers dispensations for that!

"Are not unbleached candles REQUIRED by the rubrics for this EF Requiem mass?"

No, the 1962 rubrics do not mention the candles at a Mass for the Dead. Although Fortescue says "it is becoming that the altar candles be of unbleached wax", so it's considered good to use them if available.

You would offer, then a similar dispensation from, say, Musicam Sacram, of course...

I have to begrudgingly agree with Pater here to the extent his point is that if you're going to do something, you should do it right.

Musicam Sacram does not apply to the EF. I assume you're referring to De Musica Sacra (1958).

The Faure Requiem does not set the Gradual, Tract or Sequence, so no doubt the schola will sing these. The Gradual (Requiem aeternam) is a mode II Gradual whose melodic outline is similar to the Christmas Midnight Mass Gradual (Tecum principium). The Tract (Absolve Domine) is actually quite easy to sing. Can a modern congregation, used to 'doing things', sit throught the Gradual, Tract and Sequence, one after the other? Yes, they can and should! I would also extend the Communion Lux aeterna by interpolating more psalm verses. This is very effective and since the antiphon is fairly simple the congregation can take it up.

Familiarity with the Gregorian Missa pro Defunctis is a great advantage for a schola, as it will find its services in demand elsewhere.

John, I think Pater's point was that, regardless of the Form of the Mass, one should not arbitrarily pick and choose which aspects of the rubrics and guides to follow and not follow based on personal preference or ease of use.

So, if certain candles are required by the rubrics, which Henry informs us is incorrect, they must be used outside a disposition given. If one is willing to neglect the rubrics there, then one has no argument that the document Musicam Sacram applies in the Novus Ordo because one has established one's self as the decider of which rubrics apply.

I agree with him and I think it is important for us to remember. Oftentimes we let rubrical inventiveness slide when it comes down in our favor - as something approaching what we perceive to be traditional. This is hypocritical because we lost our higher ground to argue the more liberal liturgies should simply say the black and do the red.

In the case of the TLM, the rubrics should be followed, but oftentimes are not because they are "too difficult" or those involved are not committed to learning and practicing. This concession to ease is no better than those things I (and others) rail against in terms of the sloppy celebration of the Novus Ordo Missae.

Yes, Marc, but don't you just love it when every time Ignotus starts yet another attack upon Fr. MacDonald he only manages to reveal his own ignorance? LOL! Ignotus sometimes stumbles over the actual facts, but he always manages to pick himself up and keep right on going...

Pin - I freely acknowledge that I am ignorant of the EF rubrics. I do not celebrate the EF mass, so there is no need for me to be familiar with them. Hence, I asked if unbleached candles were required by EF rubrics. Henry, who knows EF rubrics, provided the information.

Another difference 'tween me and thee is I am not ashamed to acknowledge that there are things I don't know.

And this was not an attack, as Good Father McDonald perseverates in using the "say the black, do the red" mantra while, at times, ignoring his own rubrical perseveration...