NONES ON THE RISE, AND NO, I DIDN'T MISPELL, YOU READ CORRECTLY 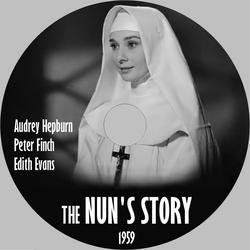 My comments first: You can read the full report by The Pew Forum on Religion & Public Life by pressing this sentence. I give excerpts of this just released survey below my comments.

I think we have to understand the data through the lens of 1960's anarchy and antipathy toward authority, even God's authority, not just political authorities, or law enforcement, or the armed forces. We have people today formed by this anarchy but who are oblivious to the foundation of their religious or non-religious practices. The same is true of Catholics. Today's Catholics are oblivious to the pre-Vatican II antecedents of the religious practice, but more importantly the wholesale jettison of pre-Vatican II practices in favor of vapid "spirit of Vatican II" practices. At the same time, we have to acknowledge that very rigid but sincere pre-Vatican II Catholics lost their faith in the aftermath of Vatican II reforms that shook them to the foundation to the point of ceasing to go to Mass so disgusted were they with some of the reforms to not identifying themselves as Catholics anymore. I heard many Catholics who once were very devout, during this period of upheaval in the Church say that the Catholic Church had left them, not so much that they had left the Catholic Church. Children of once staunch Catholics in the 1950's were affected by their parent's malaise and this was handed on to their children's children and so on. That is where we are today. But what happened to the Catholic Church in the 1960's in particular, especially it deleterious effect on authentic Catholic identity cannot be underestimated.

Coupled with this, we cannot underestimate the deleterious effects of scandal in the Catholic Church due in large part from the anarchy created in the 1960's which led to the loss of Catholic identity, especially priestly identity, and the sexual revolution that taught everyone to rely upon feelings and emotions and sexual urges and let it all hang out no matter how perverted or taboo.

From the Pew Forum:

The number of Americans who do not identify with any religion continues to grow at a rapid pace. One-fifth of the U.S. public – and a third of adults under 30 – are religiously unaffiliated today, the highest percentages ever in Pew Research Center polling.

In the last five years alone, the unaffiliated have increased from just over 15% to just under 20% of all U.S. adults. Their ranks now include more than 13 million self-described atheists and agnostics (nearly 6% of the U.S. public), as well as nearly 33 million people who say they have no particular religious affiliation (14%). 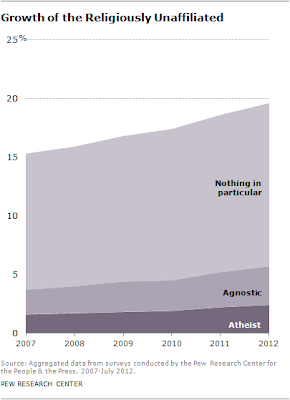 This large and growing group of Americans is less religious than the public at large on many conventional measures, including frequency of attendance at religious services and the degree of importance they attach to religion in their lives.

However, a new survey by the Pew Research Center’s Forum on Religion & Public Life, conducted jointly with the PBS television program Religion & Ethics NewsWeekly, finds that many of the country’s 46 million unaffiliated adults are religious or spiritual in some way. Two-thirds of them say they believe in God (68%). More than half say they often feel a deep connection with nature and the earth (58%), while more than a third classify themselves as “spiritual” but not “religious” (37%), and one-in-five (21%) say they pray every day. In addition, most religiously unaffiliated Americans think that churches and other religious institutions benefit society by strengthening community bonds and aiding the poor.

With few exceptions, though, the unaffiliated say they are not looking for a religion that would be right for them. Overwhelmingly, they think that religious organizations are too concerned with money and power, too focused on rules and too involved in politics.

In 2007 Pew Research Center surveys, 15.3% of U.S. adults answered a question about their current religion by saying they were atheist, agnostic or “nothing in particular.” The number of religiously unaffiliated respondents has ticked up each year since, and now stands at 19.6%. 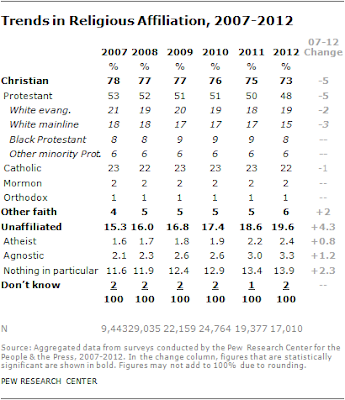 Looking at the word "Nones" and the picture of the nun, I immediately thought "Nones" as in prime, terce, sext, none, vespers, compline, etc. . . . and figured we were going to start publicly observing the Hours at church. :-)

Such nerds! I thought the same as Anon5.

Is this why we hear so many people say, "I'm not religious, but I'm VERRRRY spiritual"?

Whenever I hear someone say, "I'm not religious but I'm spiritual," I immediately think "flake." When I was in school, if a girl said it, it meant "easy..." LOL!

Good Father - It would be interesting to review your comments over the last couple of years. In this post you claim "many" have said the changes pushed them out of the church. Previously you have stated that you had spoken with "a few" who shared this perspective. I find the changes in you recollections telling. In your memory things grow like the proverbial Topsy...

Being "spiritual but not religious" is really the logical conclusion of pietism. There is a reason the number of "adherents" is growing as more and more Protestants become disinterested in their churches and disaffected by their leaders.

Instead of seeing these numbers negatively, Catholics should see this as an opportunity to interject Truth and meaningful spirituality, which is what everyone, especially these people, are so desperately seeking.

The whole "spiritual but not religious" thing is a very Nietzschean spin on theism; it seems to be a statement that the believer is consciously choosing to shape his own truth about god(s) in a way that I suspect tends to be morally and practically self-serving (at least in terms of, rather than allowing himself to be shaped by an external concept of god(s). Certainly the anti-clerical, anti-institutional connotations of "spiritual" support this. From the Catholic perspective, of course, this approach means that the "spiritual" person also won't let himself be shaped by God--that the "spiritual" person won't accept the truths of Catholicism.

All in all, this notion seems to me to be, at best, unreflective theological pablum, and, at worst, a radical deification of the self, anti-institutionalism and, ultimately, anarchic social ramifications. And after that comes the dictatorship. :-)

And yet, how long will this modern spiritualism last before it, too, becomes doctrinal? Look at these statements about spiritualism as an example of this (note as well the dogmatic assertions of what "religion" supposedly is:

It strikes me in reading this that spiritualism, while it tends to paint itself as all-tolerant and all-accepting, in fact is at least potentially intolerant of organized religion, which plays the role of the serpent in the garden.

I agree, Pater Ignotus, that Fr. McDonald has grown impressively in his understanding over the past couple of years. As have many of his devoted readers, but not all.

Ignotus, A review of your posts over the past couple of years would really be a hoot! A mosaic of an angry, arrogant, liberal Priest who quite possibly has personal faith issues himself and who, for some unknown reason, has an obsessive need for Fr.MacDonald's attention and approval. This neurosis, of course, manifests itself in verbal attacks on the object of cathexis (Fr. MacDonald)or in snide and sarcastic comments and addresses directed toward him. You really would be a psycho-analyst's gold mine if the Church would pay for it, but it would seriously drain the Vatican's considerable reserves. LOL!

I can say from experience that there may be a few atheists in fox holes, but not many. People use all sorts of expression about their faith and spirituality because they are CONFUSED. They are not speaking accurately. In fact, I would say Pin's assessment is exactly what MOST people are trying to convey and it has almost nothing to do with faith or spirituality except in an unintended way.

Our Church has THE Truth. That is it in the long and short. We must be willing to express that. Beating people over the head with it is not the right way, but only because it confuses them even more. We got all wobbly and nonjudgmental in our misguided ecumenism and have betrayed our Lord in EXACTLY the same way Peter did in the garden. We can be accepting of differences and unwavering in dedication at the same time.

Sometimes I look at the comments just to see if Pater Ignotus is stirring the pot.

Some call it " hyperbole." In fact it is just outright fiction.

And Pin, if you want to identify someone whohaspersonal faith issues, look to yourself skipping mass when it strikes your fancy...

Ignotus, Can you spell "perseverate?"

You can call this perseverating all you want, trying to spin attention away from your un-redeemed behaviour. It is, however, merely a recitation of the facts of your posts here. If you don't like it, have the humility to allow grace to change your behaviour.