CONGRATULATIONS TO MY FORMER PARISH OF SAINT JOSEPH CHURCH IN MACON AS THEY CELEBRATE THEIR 175 ANNIVERSARY ON SATURDAY, NOVEMBER 5TH AT 4:30 PM WITH BISHOP GREGORY HARTMAYER 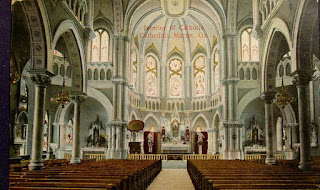 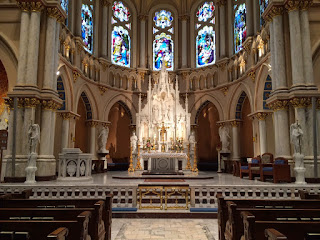 Last year before I knew I would be leaving Saint Joseph Church, I set the date for "our" 175th Anniversary as a parish for this Saturday, November 5th at the 4:30 PM Sunday Vigil Mass with a reception following.

Unfortunately due to parish commitments in Richmond Hill (and a funeral in morning) I am unable to attend as one of two former pastors still living. Msgr. John Cuddy is in a nursing home in Macon and not able to participate. He was pastor there from 1974 to 2004 and I was pastor from 2004 to 2016.

God bless you and many more years to this wonderful downtown parish in Macon, known at the "Jewel of the South!"

Here is the Macon Telegraph's story on the anniversary: 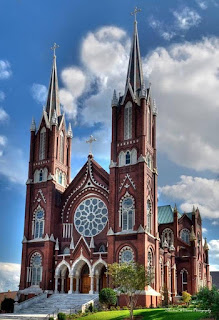 Dr. John O’Shaughnessy vividly and fondly remembers the smell of incense at St. Joseph Catholic Church.
O’Shaughnessy, 86, said when he was 3-years-old he moved with his family from New York to Macon, where his father worked in the fertilizer business.

“Back then, incense was only burned once a month, but I really liked it and looked forward to it,” O’Shaughnessy said while meeting with a group sharing St. Joseph’s memories. “As a boy, I loved all the ornate décor but as far as a sensory memory, the incense really stood out.”

O’Shaughnessy has other memories as deep and as rich as the pungent incense. He remembers being called out of elementary school during World War II to serve as altar boy at a funeral for four Italian prisoners of war from a camp just outside of Macon.

He said he remembers thinking here are people we’re at war with — people our soldiers are trying to kill — but here we are praying they go to heaven. He said it took a step of faith to pray that but it was a step he made. Sincerely.

On a lighter note, he also remembered being called to serve as altar boy and found a strangely dressed, strangely speaking priest serving Mass for a small group of strangely dressed participants. He said he found out they were the Von Trapp Family Singers, the family that the film “The Sound of Music” was based on.

They were touring the U.S. and in were Macon for a performance.

Other memories include the many hours gazing with wonder at the church’s stained glass windows and the amazement as an adult when they underwent renovation along with the sanctuary 10 years ago.

“I couldn’t believe how much they brightened up,” he said. “And it’s really beautiful when the morning or evening sun catches the windows and shines all the colors on the opposite wall. Really beautiful.”

Anniversary activities co-chairperson Don Coates called O’Shaughnessy, who practiced internal medicine in Macon from 1961 until he retired in 1995, a patriarch in the church. Among the family names that reach far back in church history, like Sheridan, McGoldrick, Smaha, Union and Shaheen, are the McKennas.
Mary Alice Garvin Bruce’s mother was a McKenna.

“I was baptized here and my mother and grandmother were, too,” she said. “My great-grandparents were married in St. Joseph’s in 1865 and my grandparents were married in this church in 1905 — maybe the first couple to be married in this building. All of them were from Irish heritage, so I’m Irish through and through.”
Bruce said Irish immigrants found their way to Macon in commerce and also by working as cheap labor for the railroad.

Bruce said she remembers her first Communion and, like many others, many life events experienced at the church stand out. Events like marriages, births, baptisms and funerals.

Both Bruce and O’Shaughnessy remember the USO dances held in the church’s basement during World War II. Bruce said she could only peak in the windows because she was too young to attend.
But there is another special memory for Bruce.

“I was named May Queen in the eighth grade and was the one who got to place a crown on the head of (a statue of) Mary,” she said. “I was so honored and proud. It was one of the most special things of my young life.”

The Rev. Scott Winchel said, especially in Bruce’s younger days, May was full of events celebrating motherhood with children thinking of their mothers and looking forward to their roles as parents. He said it was indeed a privilege for a young girl to place the crown on a statue of Mary.

Winchel, 48, has only been pastor at St. Joseph’s for four months, coming here from serving in Cordele. He said he enjoyed sitting in and hearing the memories shared by the group.

“I really enjoy Macon,” he said. “It’s a beautiful, wonderful city and people in the community and at the church have been very kind. Obviously, the church here is a truly beautiful structure and brings many visitors.

It’s the third building St. Joseph’s occupied, and I think through the years it’s been a place of sanctuary, a crossroads for people in their lives and travels. It’s been a center of culture and family and the big events of life and faith. The church itself is almost like a vehicle helping people in their journey toward God. It’s a safe haven and beacon in the night and we hope it always serves as a light in the world (that) people can come to and appreciate God’s beauty and get help on their journey.”

Winchel said in his short time in Macon he’s grown to appreciate more and more the church’s many ministries and outreaches — such as involvement in Family Advancement Ministries, St. Vincent de Paul Society food pantry, Daybreak homeless day center and others.

Connie Thuente is also an anniversary co-chairperson and said there will be a celebration reception following today’s 4:30 p.m. Mass. All events will be at the church’s Poplar Street building which, upon its 1903 dedication, church records show that The Telegraph wrote, “If architecture may be fittingly described as frozen music, St. Joseph’s Church … is a symphony.”

A historical marker outside the facility tells of Macon Catholic history, which it says goes back to 1829 when Diocese of Charleston Bishop John England visited here. It notes a growing Irish Catholic community in the 1830s and the church’s first pastor coming in 1841. That was just 17 years after Macon officially became a town. Other church records say the founding congregation was 50 parishioners strong and that same year the church bought its first building, a former Presbyterian church.

It was a group of Jesuits who remained in Macon after the closing of their Macon seminary in the late-1890s/early-1900s that decided the parish needed a third structure more befitting the beauty and glory of God.

The group discussing memories all agreed the building was result not only of contributions from Catholics, but from a variety of Macon’s faith communities as well.

“But I think the most admirable thing about this building is that it reflects the faith of people who believed their God was beautiful and magnificent,” Winchel said. “It reflects God and the lives of joy, hardship and hard work of the people who came here and who cared enough to make it beautiful.”

When I first encountered your previous church via your blog back in 2009, I recall those days, as it happens, being filled with hope that appreciation for transcendent architecture, meditative liturgical music, and God-centered worship, were on their way back into the lives of our parishes. Those hopeful days were not to last, but they were satisfying for a time. We thought we had cause for hope, but we have since been made to look like fools. O God, thou knowest my foolishness. Because for thy sake I have borne reproach, shame hath covered my face. For the zeal of thy house hath eaten me up, and the reproaches of them that reproached thee are fallen upon me.

Congratulations, FrAJM, for having an important and positive part in that history.


The Sacrifice of Christ, His Passion and Death, is re-presented to us in our own time. At Mass we enter into the self-same Divine Sacrifice perpetuated down to our time from two thousand years ago; and this because it, and the merits it wrought, entered into the Eternal realm of the Divine Existence. Just as the Incarnation produced an inseparable unity between the Divine and human natures, so the Sacrifice of Calvary brought about an inflection point in our reality, a unity between the natural and supernatural, between the Eternal and Temporal. So the Sacrifice of Calvary which was celebrated at St Joseph Church at it's ecclesial inception so many years ago, whether of a similar ir different liturgical form, is the same one I and others here participate in today. While this is beyond the full understanding of us mere mortals, are there not things of man's own doing which would at one time been beyond the comprehension of those who lived in another era? Can we not watch a television show from forty years ago just as those fom that time watched it? We watch it and enter into the show as if we were among those who watched it back then. For those who existed before our time, this would have been considered a miracle beyond belief, yet it pales in comparison with the miracle celebrated every day on our altars.