I copy and paste this from the former Deacon's Bench, Greg Kandra: 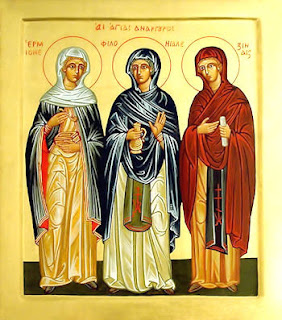 As I noted earlier, yesterday I took part in a panel discussion with America Media on the subject of deacons in general and women deacons in particular. This morning, one of the panelists, George Demacopoulos, theologian and founding co-director of the Orthodox Christian Studies Center at Fordham University, passed along a timely item from the Orthodox (which has been translated by Google from the original Greek).

The big news, from George: “News broke this morning that the Patriarchate of Alexandria (which is the autocephalous head of Orthodox, Chalcedonian Christians in Africa) officially voted to restore the female diaconate.”

Speakers at today’s meeting were Ven. Nigeria Metropolitan k.Alexandros who developed the theme of fasting within the African reality and Ven. Cameroon Metropolitan. Gregory who omilise on the institution of Deaconesses the missionary field. Both rapporteurs presented with theological arguments the positions and proposals, was done no extensive discussion thereon.

On the issue of the institution of Deaconesses, it was decided to revive it and ordained bishops on tripartite committee for detailed consideration. (Emphasis added.)


It remains unclear right now what, exactly, female deacons (or deaconesses?) would do in the Orthodox church, and how widespread this revival might actually be. There are a lot of unanswered questions. At bottom, this seems to me to be a significant first step, but much more discussion (or “consideration”) lies ahead.

There's nothing wrong with non-sacramental deaconesses as the Eastern Orthodox understand them.

What's wrong with the term is how it would be mis-applied in our toxically femnist western church and culture.

If it's just a service title, so be it. We could give the LCWR nuns this title, and then reclassify their orders as associations of the faithful.

"Deaconesses" in the Orthodox Church were not "Female Deacons," as they had no liturgical functions. They helped with charity work and the baptisms of women.

At Atlanta's Greek festival earlier this year, I asked the dean of the Greek Orthodox Cathedral of the Annunciation about deaconesses, and he replied that while he knew of nothing in their canon law that prohibited them, they mainly assisted with female baptisms and brought communion to the sick long ago. He added they did not have any liturgical role at the altar.

I'm not sure there is much to make of this...it isn't as if the Orthodox Church stated that women could now be priests, something they are pretty much dead set against, though as far as I know they have never held an Ecumenical Council to state that women could never be ordained (as opposed to simply changing canon law). the Orthodox accept the first 7 EEcumenical councils.