OKAY, I CONFESS MY GUILT! I LIKE THE WALKING DEAD!

This is a  photo I took as our bus crossed from the living to the so-called walking dead in Palestinian controlled area. This is Hebron: 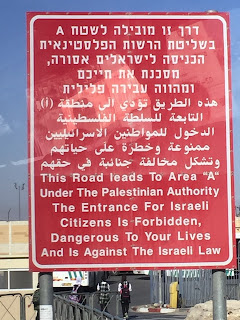 On our way back, Israeli soldiers with machine guns drawn entered our bus to make sure none of us were the walking dead!

The Walking Dead premiers its new episodes today on AMC. It is horribly violent but has good acting, is filmed in Georgia, so how can you go wrong with that?  It is metaphorical and brings religion into the apocalypse of zombies, the walking dead, who have no conscience, just a voracious appetite for the living flesh of humans.

But what is the metaphor? What caused the actual apocalypse? No one knows, and the writers aren't telling, but I will venture a guess on the metaphorical part of the two questions.

I think it is a metaphor for the mindless terrorism we experience in the world and those who perpetuate it are the walking dead. The living must be as ruthless as they to protect themselves. The living become an image of the walking dead in their treatment of others who are living in order to survive.

Gee Father, do you miss your brand new parish at all? You just got there and right away you take a long trip to Europe. And let me guess the sermon you give upon your return will be about your trip and how everyone should go take the same trip. Just a guess.

Were such a catastrophe actually to occur, and you could travel only with what you could carry in a back pack, what would you carry? If you'd take a Mass kit, how many hosts and how much wine?

to second anon, you must be one of the talking dead?

Anonymous, Father is canonically entitled to thirty days of vacation, including three Sundays. Besides, his state is battling this zombie terror, so it's a good time to take a vacation. By the way, why don't our presidential candidates discuss the zombie threat?

Hillary: I'm appalled at the zombiephobia that Donald is spouting. My administration will make equal rights a priority for zombies and for everyone in the LGBTZ community.
Donald: She's a liar. I'm gonna buid a wall to keep those zombies out, till we can figure out what the hell is going on. Hand me those breath mints.

If laughing is coughing out a deamon then Tony V just saved my soul. Five Stars *****

I will be so glad to see this election die. Even if it does come back every two years 😣

That's the funniest thing I've read in a long while. I agree with rcg, five stars.

Assuming zombies occurred as in all the canonical movies and not the fast/organized mobs of 28 days or I am Legend, I don't think the movies are at all believable in an American context.

Consider that there are at least 1 million .22 caliber semi-auto rifles in the US civilian population and most people who have the lowly .22lr also buy 'bricks' of ammo that come in 550 bullet packs for $20 or so. One guy with a .22lr (gun is design to kill rabbits, squirrels and other small critters but will drop bigger things if close enough), could dispatch a thousand zombies a day. In weeks the infestation would be over.

Only in a society that has been disarmed could a zombie apocalypse happen.

Father McD!! First of all, I miss you so much! Secondly, I absolutely love the Walking Dead. Just because people refuse to acknowledge evil doesn't mean it does not exist. While I agree that the show is gory and hard to watch sometimes, it is basically a show about good people doing the best they can in a very bad situation. It's good acting, thought provoking and entertaining. Also, CHILL OUT PEOPLE!! It's not real. Wow!