TO VEST OR NOT TO VEST, THAT IS THE QUESTION? 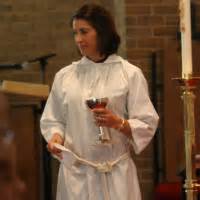 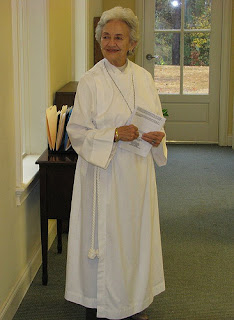 Father M. Francis Mannion, a retired priest and thus a product of 1970's thinking indelibly marked on priests his age brain, still has a hint of tradition in a contemporary sort of way when it comes to the Mass and proper decorum.

He decries the fact that so many Extraordinary Ministers of Holy Communion and lectors dress so poorly for their ministries. Some wear tennis shoes or flip flops. He saw some wearing tee shirts with slogans. And worst of all, there are those who are scheduled who don't show and the priest has to ask someone to come forward.

I have experienced all of these things in my soon to be 36 years as a priest. I am particularly jaded by those who don't show up for Mass when they are scheduled. They not only wear flip flops; they don't give a flip.

I have at situations where there were no EMHCs available and thus one or two chalices remained on the altar and had to be consumed after Mass. This of course is unacceptable and contributes to the sorry state of affairs with our Ordinary Form Mass and its solemnity and reverence.

So Father Mannion is suggesting that EMHCs and Lectors, be vested in a nice alb. They should process in and out of Mass and sit together as a group.

He backs up his suggestion with the Ordinary Form's Roman Missal GIRM:

“In the Dioceses of the United States, acolytes, altar servers, readers, and other lay ministers may wear the alb or other appropriate and dignified clothing” (No.339).

Fr. Mannion concludes his article by listing five reasons why lay ministers wearing albs would be a good thing for the Ordinary Form Liturgy:

First, since the clergy and altar assistants are vested, why not the EMs—and the lector? Surely there should be some consistency regarding dress.

Second, the fear that liturgical ministers will be clericalized is not in my experience borne out. Besides, a clericalist attitude is a matter of how one thinks and acts, not how one dresses. I have never found EMs regarding themselves as superior to the congregation. Indeed, most approach their ministry with humility.

Fourth, the alb brings a sense of dignity to the Mass, which is meant to be glorious, splendid, and beautiful. While this aim will never be fully expressed this side of heaven, we are nevertheless called to prepare and celebrate the liturgy in a way that already points to heaven. As we reach toward the heavenly, all ministers should appear to have a great sense of reverence for their ministry. Wearing an alb will assist with this.

Fifth, the alb covers a multitude of sartorial sins. In parishes that do not vest their EMs (only about 40% do), there seem to be no rules of dress at all. At the parishes at which I have served, I have observed EMs wearing tennis shoes, jeans, shorts, and flip-flops. At one parish an EM was wearing a Bryce Canyon sweat shirt. In most non-alb wearing parishes, the majority of ministers were not dressed professionally or as if for an important occasion. Wearing an alb would solve this problem.

We live in an age in which everything is viewed in a functionalist, utilitarian, and pragmatic fashion. We shy away from the formal and the ritualized. It is natural in this environment for the liturgy to be celebrated in a manner that manifests these qualities.

Ministers wearing albs would be a major step forward.

What do you think and do you experienced vested lay ministers in your Ordinary Form Parish?
Posted by Fr. Allan J. McDonald at Thursday, June 02, 2016

Ditch the EFs. The way this has been implemented in the US has been a serious abuse. That way you don't have to worry how they are dressed. I avoid EFs whenever possible. I really don't like it when the laity is playing priest.

I've seen the EMHCs vested only in the Diocese of Harrisburg when I visited friends there. I think it is unnecessary.

This is easy -- just look to how the saints resolved these issues.

Oh wait, none of them participated in this sort of nonsense.

I agree with TJM although the alb, strictly speaking, is the garment of all the baptized. The cincture, however, represents chastity.

Just a suggestion. When not enough Extraordinary Ministers of the Eucharist have not shown up, and the wine has already been consecrated, I place the chalice or two in the tabernacle and use it at the next Mass.

This my friends is the "clandestine" way of implementing WOMEN priests the modernists have been trying this for years by dressing up women in PRIESTLY albs, once again the VATICAN has spoken THE DOOR IS CLOSED on the issue of womyn priests, enough already!! Go to the Episcopal church if you want women running around the altar, our Roman priests were, are and always will be men.

Get rid of EMHC.

I vote for doing away with the EMHC. It isn't just a matter of casual dress. It's a casual attitude in how they handle our Lord in the Blessed Sacrament. And you have to love the ad libbing that goes on when they decide to pass out blessings to children as well.

the most repulsive thing EMHC's do is to give their "little blessings" to the children. Major Barf Alert!

Anonymous, the Precious Blood in the chalice may NOT be reserved in the tabernacle. In exceptional cases it may be permissible to reserve a very small portion in a phial.

Requiring herds of EMHC's is the raison d'etre for communion in both kinds. So the solution to all this is .....

-- Don't regularly offer communion in both kinds (as my parish doesn't), just the Host.
-- Then EMHC's are unneeded, just priest and perhaps a deacon offering communion.
-- So no dreary discussions like this one.*

How easy sorting it out is! When you get your thoughts in order.

* Not to speak of spectacles like an early Saturday morning Mass I recall after an immobilizing Friday night snowstorm. The congregation consisted of one woman and two men. The woman served as EMHC, offering the chalice to the one man who received in both kinds.

What's truly extraordinary is that we're all in agreement against vesting these extras.

As for offering the Sacrament twice via the chalice, I'm fine with that on Maundy Thursday and at ritual Masses. But the reality is that once you've received the Sacred Host, even if only a Particle, there's sacramentally nothing more to receive.

There's nothing "extraordinary" about EMs--they're there every Sunday. Why, I don't know. In our parish, after communion the priest sits down for a few minutes...I guess he's trying to instill some of that "holy silence" which the NO is so bereft of. But why not just get rid of the EFs and let distribution of communion last 2 minutes longer?

EFs are kind of like Outward Bound: let's get everybody involved, make up a job for them. But really, we don't need them.

I agree, get rid of the EMHC and the photos show how awful women look in albs. Many people are also not receiving from the chalice because of the germ factor at large Masses. Distributing only the host would save a lot of time and reduce EMHC numbers.

EMHCs are not necessary, but if the Bishop mandates them, maybe they should wear long white aprons to represent service.

I am more concerned about lay readers in too short skirts. After reading they turn around and bow while 3 steps up and show far too much of what should not be exposed.

I agree with Carol as regards lay readers in too short skirts and often not much on top, so the view, front and rear, doesn't leave much to the imagination and one is left wondering when Church teaching on modesty of dress will be implemented.

Leave it to Jan to tell us that dresses look terrible on women.....

I would agree with limiting the distribution of Eucharist to the host. Everyone dressed in albs does not sound like a good solution either. Instruction on how to dress for liturgical service might be a better approach. It helps to distinguish the ordained from the parishioner and emphasize that both play a valuable part during Mass; even participating from a pew. All of the commotion and competition at the altar is a distraction. That's just opinion of course.

I agree with Jan and Carol, although at the Masses I have attended I can''t remember one that was dressed as they describe. EMHC's should be given guidelines in how they are to be appropriately dressed. I have prayed about this, that while attending Mass, women in the congregation will be dressed as befits being in the presence of God. This applies to men as well, but especially during the summer months, it is some of the women who could use more covering.

BTW, there's no way that 40% of parishes vest these extras. He needs to check his sources.

Fr. McDonald, what is the current practise at your gaining parish?

Anonymous 6.00 pm, actually albs are similar to what men where in the middle east but I suppose you call those dresses as well?

The Church has so gone to Hell.

Just the gates of hell which will never, ever ever prevail against the Church notwithstanding what Calvinists believe.

Well, in the eastern rites, readers are often vested (we don't have EMs), but I'm in agreement, limit the EMHCs to hospitals, and this kind of thing won't be needed.

Fr, the Calvinists and protestants went to Hell a long time ago. That is why I am here...and, apparently, in the same hand basket again.

A-tisket, a-tasket, Gene's in an awful basket.
He left his Church to seek relief,
But on the way he lost it.

Actually, Gene has simply discovered, to his everlasting chagrin, that the Catholic Church is not made in his image.

Let us not forget the Satan was the most beautiful creature. He had a beautiful voice and was clothed in light. He was known as the morning star. His pride and vanity caused him to fall from heaven. Vanity in the way things look instead of the way things are.
He appears to be the type that would love fancy vestments and the like. He lost his favor with God due to his vanity.
God's ways are not our ways. He sees beyond the beautiful vestments and bright lights. He tells us these stories
so that we may not make the same mistakes. What is beautiful to God may not be anything we see but what we cannot see.