TO BELL OR NOT TO BELL, THAT IS THE QUESTION AGAIN! 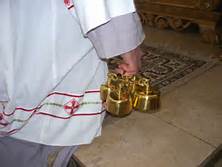 I spent the weekend on Hilton Head Island, SC and took the photo above.Hilton Head is 60 miles from Richmond Hill. I start as pastor at St. Anne in Richmond Hill this coming Wednesday--a new day of excitement and anxiety.

On my way back to Richmond Hill, I was listening to Catholic Radio and Gus Lloyd's  Seize the Day. The topic was about ringing bells at the consecration and does your parish do it or not.

The majority of call-ins stated that their parish did it and many said that new pastors, younger of course, reinstituted the bells. All were very grateful for it.

My new parish has bells as does my old one. Does yours?

The callers were very good and all made the point that the bells bring one's focus to the Canon of the Mass and when they are not rung, the angels provide bells in their head for them to hear!

Pastors who have removed the bells or won't reinstate them are demythologizers. We all know the practical purposes of the bells when the Mass is ad orientem and the Canon is prayed silently. But practical considerations are overlaid eventually with spiritual meaning. One should embrace the spiritual meaning given to the bells and not insult those who like the bells by demeaning them with just the practicality of them that is no longer needed in a Mass facing the people with an audible Canon.

These know it alls  who look down their noses at the poor souls who aren't as smart as them don't realize that the Mass is an affair of the heart not an intellectual pursuit. We need art, sounds, smells, taste and touch in the Liturgy. We are not Puritans!

Some said that it is rung also at the Epiclesis. Others said it is also rung after the priest had consumed the precious blood.

And of course someone who attends the EF Mass listed the myriad of places in which the sanctus bless is sounded.

Give me a Mass with bells, long sounding bells--sung to the tune of "Give me a head of hair..."

"....the Mass is an affair of the heart not an intellectual pursuit."
The entire reform of the liturgy of Vatican II was against this, as was the Liturgical Movement. The liturgical reforms were nothing more than the realisation of the ivory tower devotees of this Liturgical Movement. Symbols as well as the delights for the 5 senses were abrogated in favour of the intellect. The triumph of Gnosticism is what characterises the contemporary Catholic Church.

Bells are definitely necessary at the traditional Mass. Here's a story from yesterday that proves it! We went to the local convent of Franciscan sisters yesterday for the first Mass of one of the newly ordained priests of the SSPX.

Unfortunately, our young child was being fussy and wiggly (probably due to the lack of air conditioning in the chapel). So I was having to stand up and hold her behind a pillar, and I couldn't see the altar. But, with the ringing of the bells at the Hanc Igitur, I knew I needed to kneel for the consecration. And with the six bells at the double consecrations, I knew I could resume standing to keep the baby calm.

Without bells, I wouldn't have had much indication of what was going on -- with the bells, I was still able to participate in the Mass to some degree.

Yes, at most Masses we do have the bells. I like them too. It also helps focus the mind as sometimes there can be road noise and other distractions. It certainly adds a spiritual dimension, as they say, "The Catholic Mass, smells and bells" ...

A great photo of the heron too ...

I vote for the bells, and I have not heard them in over twenty years. I also would not mind seeing the Chalice with its veil either.

I've had to take our yowling middle daughter outside during the Eucharistic prayer for the last three weeks in a row, but fortunately can hear the sanctus bells from the church garden so can still follow the mass. The folk group sounds better from outside too!

Although you have more pastoral experience than I do, I will recommend introducing right away whatever traditional elements do not require the congregation to do anything differently. But I also recommend not introducing for the first few years any traditional elements requiring the congregation to change in any way. Prudentia. So, bells are fine.

So...James...you take your "yowling middle daughter" outside during the Eucharistic prayer. What about the rest of the Mass....she just "entertains" the congregation? My wife and I went to separate Masses for many years while our 7 children were growing. We did not take them...until they were old enough to behave....(And when they were old enough, the joined the folk choir....)

I now go a parish where the young pastor re-introduced the bells and not one complaint. He also uses nice gothic vestments and has the congregation sing the Kyrie in Greek and the Sanctus and Agnus Dei in Latin! Huge upgrade from the left-wing loonism of the prior pastor

If we think back a few years to when you started this blog and were toying with the ideas of Liturgical Counter-reform, I seem to recall that most agreed that education was essential to opening people up to the form of NO you introduced and the occasional EF. You should try that again. The folks that are interested will likely have stalked these pages and viewed your videos already, so the learning curve is already less steep.

@gob
No, we don't sit in the main body of the church, as they're too noisy for that. Fortunately there's a lobby at the back where we can sit/stand without causing distraction, but if one of them is crying persistently then I take her out. Our eldest behaved fine once she reached three or so, so I'm hoping the middle one will as well.

If the Holy Mass is Christ's offering of us to the Father, then why would you exclude your children from that offering? In what possible way were they disturbing Him?

"These know it alls who look down their noses at the poor souls who aren't as smart as them don't realize that the Mass is an affair of the heart not an intellectual pursuit."

The real reason (in my observation) these "know it alls" oppose bells is that they have . . . ah,shall we say . . . a more nuanced view of transubstantiation and the Real Presence than do we simple pew sitters who actually believe what the Church teaches.

The thing that gets me most is that many of these people who insist that the bells can't be rung will at the same time chide those who insist that liturgical rubrics be followed, calling them "rigid", or even "temple police."

Although I am fortunate enough not to have to attend Mass in the vernacular more than half a dozen times in the year, when I do the bell is rung at the elevations at least. Otherwise I would have to secrete a small bell in my pocket and ring it at appropriate times.

I was trained to serve Mass in 1959 and we were not taught to ring once-thrice-once at the elevations, just once-once-once (although if there were two servers the junior would ring the steeple bell).

My (non-denominational but effectively Anglican) school was adjacent to the (Anglican) parish church and they always rang the Angelus at noon. Yet no-one ever commented on it, not even the one master who was a Catholic. This was in the 1960s and had I known better I would have stopped to pray at that point. In the Middle Ages everyone would have paused and knelt. What was once relevant had become just a quaint custom.

Vatican II ripped the heart out of Catholicism as understood by the faithful and replaced it with a rational and intellectual construct which made perfect sense to those who pushed it but signally failed to connect with those to whom it was targeted. Hence the mess we are in. Bergoglio is a symptom of this decline, not a cause.

John Nolan said, "Vatican II ripped the heart out of Catholicism as understood by the faithful and replaced it with a rational and intellectual construct which made perfect sense to those who pushed it but signally failed to connect with those to whom it was targeted. Hence the mess we are in. Bergoglio is a symptom of this decline, not a cause." I think he is absolutely right. I honestly don't recognize the Catholic Church of my youth, except when I attend a Latin EF Mass. It's not only the Mass that is different at the OF but the behavior of Catholics generally. The lack of reverence has been mentioned numerous times. The approach of the priest too in many cases is very casual. The Pope is very casual in how he acts and in what he states. The fact that he can now state that people cohabiting can be in more of a marriage than those in a sacramental marriage has raised hardly a murmur. Perhaps we are all so punch drunk from all that this Pope has said so far in his papacy or perhaps, sadly, many Catholics agree with him ... either way John is correct that he is just a symptom of the overall decline in the Church ...

Father please oh please use the Sanctus bells get your new flock used to the idea of Tradition and start sliding in Latin, Gregorian chant, and incense and offer free mantillas at the door.

Mantillas at the door..... a good way to spread head lice.
Women haven't had to wear those for years. If you want to wear one bring your own.
Don't spread head lice. Yikes..... Gregorian chant is beautiful but not as beautiful as the long ago Easter Vigil.