THE CONGREGATION FOR THE DOCTRINE OF THE FAITH (CDF) PUBLISHES "FAQ" FOR THE ANGLICAN ORDINARIATE'S NEW "DIVINE WORSHIP--THE MISSAL" WHICH GOES INTO EFFECT THE FIRST SUNDAY OF ADVENT! CONGRATULATIONS TO THE CONGREGATIONS FOR THE DOCTRINE OF THE FAITH AND FOR DIVINE WORSHIP IN PRODUCING AN ANGLICAN ORDINARIATE MISSAL AS THE TEMPLATE TO THE REFORM OF THE ORDINARY FORM OF THE ROMAN MISSAL! 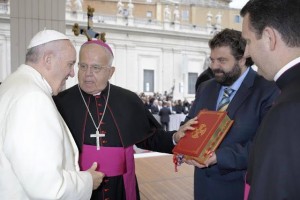 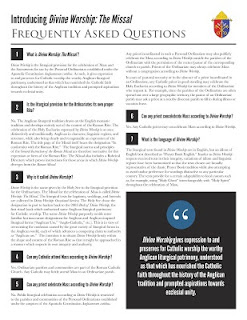 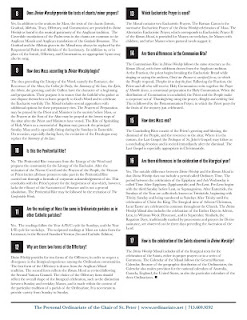 
How does Mass according to Divine Wor-


...The Missal includes several appendices
with additional options for these prepara-
tory rites. The Prayers of Preparation may
be prayed by the Priest and Ministers in
the sacristy before Mass, or the Prayers
at the Foot of the Altar may be prayed at
the lowest steps of the altar after the
Priest and Ministers have vested.

(Great News, the Rite of Sprinkling precedes the Mass as in the Extraordinary Form:)
The
Rite of Sprinkling of Holy Water as a me-
morial of Baptism may precede the prin-
cipal Sunday Mass and is especially fit-
ting during the Sundays in Eastertide.

Does Divine Worship provide the texts of

(Great news, this makes explicit the use of the Gradual and Tract in place of the Responsorial Psalm:) Yes. In addition to the orations for Mass,
the texts of the chants (Introit, Gradual,


ion) are provided in Divine Worship as
found in the musical patrimony of the An-
glican tradition. The Coverdale transla-
tions of the Psalm texts in the chants are
common to the Anglican Missals and An-
glican translations of the Graduale
Romanum. The Gradual and the Alleluia
given in the Missal may always be re-
placed by the Responsorial Psalm and
Alleluia of the Lectionary.

(Big mistake continues, though, to be perpetuated:) In addition to,
or in place of, the Introit, Offertory, and
Communion, an appropriate hymn may
also be sung.


Why are there two forms of the Offertory?

Divine Worship provides for two forms of
the Offertory, in order to respect a diver-
gence in the liturgical experience among
the Ordinariate communities. The first
form of the Offertory is drawn from the
Anglican Missal tradition (but also the Extraordinary Form Missal too!). The second
form reflects the Roman Missal as re-
vised following the Second Vatican Coun-
cil. The choice of the Offertory form
should reflect the overall shape of the li-
turgical celebration, such as the distinc-
tion between Sunday and weekday Mass-
es, and is made within the context of the
particular tradition of a parish of the Ordi-
nariate. It is not meant to provide variety
from Sunday to Sunday.

Which Eucharistic Prayer is used?

The Missal contains two Eucharistic Pray-
ers. The Roman Canon is the normative


Eucharistic Prayer of the Divine Worship

How does Mass end?

The Concluding Rites consist of the
Priest’s greeting and blessing, the dis-
missal of the People, and the reverence
to the altar. Where it is the custom, the


tion and is recited immediately after the


dismissal. The Last Gospel is especially

Are there differences in the celebration


of the liturgical year?

Yes. The notable difference between Di-
vine Worship and the Roman Missal is
that Divine Worship does not include a
period called Ordinary Time. The period
between the celebration of the Epiphany
and Ash Wednesday is called Time After
Epiphany (Epiphanytide) and Pre-Lent.

Lent begins with the third Sunday be-


fore Lent, or Septuagesima. After Easter-
tide, the Sundays of the Year are collec-
tively known as Trinitytide, beginning with
Trinity Sunday and being numbered as
Sundays After Trinity until the celebration
of Christ the King. The liturgical time of
Advent/Christmas, Lent/Easter are cele-
brated in common throughout the
Church. The Divine Worship Missal also


includes the celebration of the Ember


(Pentecost), and in September. Similarly,


by processions and prayers for Divine as-


sistance, are observed on the three days


preceding the Ascension of the Lord.

Thank you for sharing this intriguing update, Father McDonald. I wonder what Cardinal Sarah thinks about this missal?

The greatest challenge to the Roman Mass today is not Vatican-approved novelty or simplicity, but disorientation. Are we worshiping God or ourselves? Our response to this challenge should be to prefer those liturgical options that turn us away from ourselves and towards the Lord.

I hope - as you do - that the Ordinariate missal paves the way for future reforms of the Novus Ordo. Let's pray that that happens sooner rather than later (perhaps, for example, if Cardinal Sarah becomes the next pope)!

Lest we get in the prediction business, remember the old line: "he who goes in a pope comes out a cardinal". (As in coming out of the conclave.) Perhaps akin to predicting who the next president will be.