AN UNEXPECTED AND VERY PLEASANT DISCOVERY OF A LONG LOST RELATIVE!

Literally out of the blue this morning I received an email from a cousin of mine from Italy. His name if Roberto and he is married with two children. I think he's about my age, very young! His grandmother (Nona) is my Zia (Aunt) Ada, my mother's oldest sister from Livorno, Italia. His mother, Emilia, is my mother's niece, but she is about the age of my mother. I think that is how it goes. So Roberto would be my first cousin once removed or my second cousin? I've never met him, but I did meet his mother and his grandmother when I was in Italy in 1981. He now lives in London for the past ten years and probably speaks English better than me! So, Roberto's mother would be my first cousin if she is my mother niece although they are close in age. I'm getting all this family stuff from my sister, but I'll find out from Roberto more exactly. One of things I have regretted the most is that we left Italy in 1956 when I was almost 3 years old and I did not grow up with my Italian side of the family and thus do not really know them that well. I've visited Livorno many times and have made connections. I feel more Italian than anything else, although I am a southerner! (I'm the only one in my Italian family who was born in Napoli due to an American Army dad!)The picture below is my cousin Roberto and his wife and sons Daniel and Josh--who are English! Who would have thought? I suspect though the picture was taken in the lake region of Italia, but I don't know. 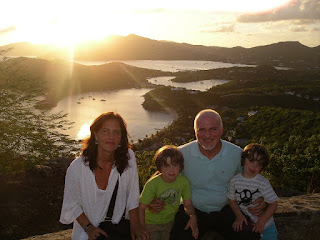 Wow! What a beautiful family and picture. The internet definitely has its positive side. Very interesting family history, Father.

By chance did he find you through your Blog?

That would be a sweet reward for your work here.

Congratulations no matter what the circumstances. I pray he has kept the faith in England. That's practically Mission Territory now-a-days. LOL