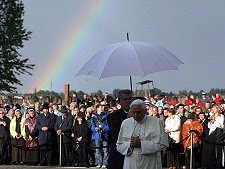 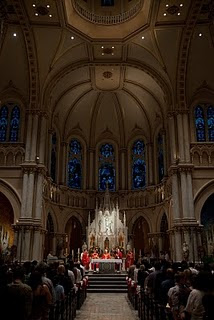 Reading some of the more "progressive" liturgical blogs, whose names I won't mention to protect the guilty, you would think that the new translation of the English Mass is the worse thing to happen to the Catholic Church since the election of Pope Benedict XVI. Of course, right thinking Catholics, what is called "orthodox" know that the election of Pope Benedict and the new English translation of the Mass are the best things that have happened to the Catholic Church in quite a few decades. At any rate, those who are weeping crocodile tears, need Kleenex to dry their blood shot eyes. The Mass, the new Mass, more dignified and "un-dumbed down" is coming and will be here by Advent 2011. I'm praying that bishops will give parishes that are ready for it, like St. Joseph in Macon, Georgia, permission to implement parts of it more quickly--why not? The two articles below are very good, read and enjoy.

The first is from an Australian newspaper entitled, A TRIUMPH OF TRADITION

The second article is from Bishop Thomas Tobin of Providence Rhode Island writting in his diocesan newspaper, Rhode Island Catholic, an article entitled, WITHOUT A DOUBT, GET READY, THE MASS IS ABOUT TO CHANGE!
Posted by Fr. Allan J. McDonald at Saturday, May 22, 2010

I am so glad to see the new translation, to have reverence and dignity return more fully to the Mass. I am worried that while the translation is changing what about the rubics, are we going to get rid of puppets, and clowns, and other abuses. Will proper well focused and performed sacred music return, or will we still have the nut jobs doing stupid stuff.