Do you remember your First Holy Communion? I do. It will be 49 years ago this coming Sunday, Mother's Day, 1961! I wore a nice, red bow tie with white shirt and dark pants! It was the Extraordinary Form of the Low Mass at 8:00 AM! 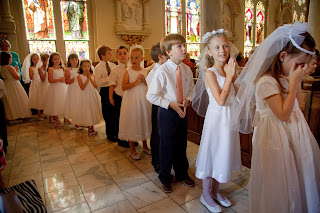 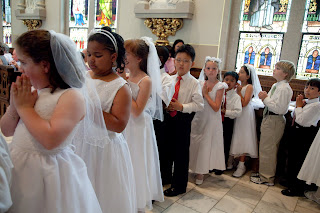 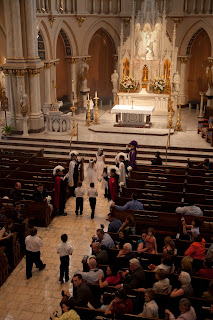 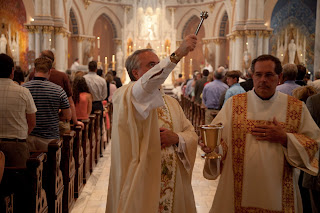 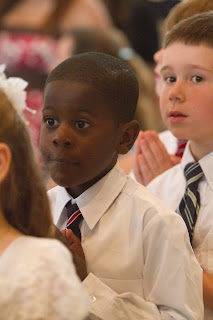 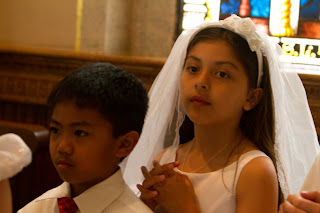 I do indeed remember my First Holy Communion. Dressed in a Navy Blue Suit, with matching clip on tie, and a White Bow Tied to my arm. We were processed up to the altar with strict instructions on the proper way to approach reverently, no hands clasped loosely with arms dangling at mid-waist for us. We waited for a spot to open at the altar rail, and knelt and awaited for father to Communicate the Host to us, on the tongue.

I remember being thrilled that after Mass my Mom, who was a member of the Altar Society, received permission for me and my Brother, who was Confirmed the same day, to enter the Sanctuary and take a picture behind the altar rail, and in front of a statue of Our Lady, and being instructed how to enter and exit the Sanctuary properly.

I also recall that by the time I was confirmed 4 years later (we were confirmed in 6th grade then), which would have been 1973, we were no longer kneeling, the altar rail was gone, not quite sure if we were receiving in the hand, but I really don't think so. At the time I remember being encouraging my parents to let us go to Mass on Saturday nights now that we had this awesome folk band playing "Day by Day".

I didn't know it at the time, but my Faith was being destroyed. By 1980 I was done with Church, lying to my folks about going to early Sunday morning Mass so I could take a job, when in reality I was meeting a girlfriend for Breakfast.

Yes, I remember my First Holy Communion. It was definitely one of the last things the Church of my Youth did for me that had a lasting meaning. It would be 30 years more before my Church would do something so concrete and decidedly Catholic that it would awaken the seeds planted in my heart that day in May 1969.

By the time I received my First Communion, the 'spirit of V2' was well underway.
I hardly remember it at all.
If it wasn't for the group photo that I still have, I'd have no memory at all.

Altar railings? What are those? I now know what they are, as recently as a few months ago.

Thank goodness my daughter just had a totally different and most wonderfully memorable First Communion on Sunday!

Everything that was absent at mine was more than made up for in hers!!! She will definitely remember her First Holy Communion!

She is the girl in the last photo.
Thanks, Father!
and Thanks to your Parochial Vicar too, the priest who Baptised her.