SO WHAT DO YOU THINK? IS THIS THE WAY OF ECUMENISM? 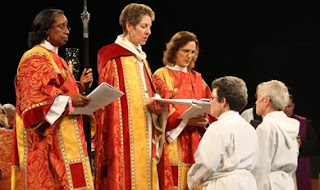 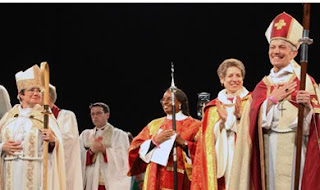 The woman on the far right, how odd, is the second "gay,partnered" Episcopal Bishop in the country. What do you think, but be nice, we are ecumenical and this is their business.
Read the story here:
Episcopalians
Posted by Fr. Allan J. McDonald at Sunday, May 16, 2010

Psychologists might say that these women have "bishopric envy."

The decision by the Episcopal Church in the United States to ordain gay clergy has nothing to do with ecumenism. It does, of course, impact our dialogue and it certainly makes the hoped for union of all Christians more difficult to achieve

That our ecumenical dialogue partners hold position on doctrine and/or morals that are different from ours is nothing new. This has been the case since the first dialogues were begun 1700 years ago. Yes, dialogue with our "separated brothers and sisters" has been going on for 1700years, and all those dialogues involved ecclesial communities that held to beliefs we Catholics do not share.

Archbishop Wilton Gregory of Atlanta gave an excellent keynote address at the most recent National Workshop on Christian Unity, which was held in Tampa, Florida, last month. You might find it instructive and enlightening to read his talk. It should be available through www.nwcu.org or www.usccb.org/seia.

I think you will be very pleased to read his forthright and respectful comments.

"they know not what they do"
Homosexuality, Gay Marriage, etc. and I will go so far to say ordained women is a disorder and it is blasphemy to profess it as otherwise, especially in the priesthood and our families. This sect of Episcopals are a perfect example of the sign of our times and how far some are willing to separate themselves from the One True Church and God. Everyone has a place in this world some just exclude themself from the Kingdom.

Pater you should have stopped at your first statement. It spoke the loudest and the truth. But as you probably know talk is cheap.

It's just another example of the 'theology of Me'.

I'm sure she'll just as good of an Espicopaliam bishop as any other one.

Glad I'm not Epicopalian and glad I don't live in Los Angeles.

Sad to learn that a lot of Latinos and Filipinos were represented. I infer that to mean a lot of them have wandered away from the Catholic Church. How tragic.

Is it Ecumenism? How can it be, when the point, purpose and definition of Ecumenism is to bring the divided branches of the Christian Faithful BACK into Union with the Roman Catholic Church. When the Episcopal Church behaves in this manner it pushes itself further from Union and thus is not behaving Ecumenically.

Actions such as these have halted the ecumenical process, Episcopalians have convinced themselves that many politically correct ideas are Christian. They have abandonded the Christian faith for a relitavistic faith based upon current social thought and ideas. As Pope Benedict has stated,"true ecumenism must be based upon the authentic apostolic faith". From what I can see the only community teaching the true faith is the Catholic Church, and our Orthodox brothers and sister, the rest are either pagan or lacking the fulness of the faith. While the Church is teaching the true faith many do not follow it, both religious and laity are in need of renewal.

Let me say, once again and at the top of my lungs: The Catholic Church can only lose in ecumenical dialogue as it is currently understood.

pinanv525 you don't seem to understand, the Church has no other choice, if the Church is who she says she is, then the ecumenical process is part of our evangelization, we must go fourth and spread the Gospel. We have an obligation to proclaim the truth, to heal old wounds, and to be obedient to our Lords request "that they may all be one". As Pope Benedict has emphasized, true ecumenism has to be based upon authentic apostolic faith that has been received by His church. Just as Christ never turns away, we can never turn away, we must go fourth no matter how hard or long it might be, we can never stop teaching Christ, working and praying for unity.

Yes, Mack, but I draw a line between evangelism, which is what you are talking about, and ecumenicism. The Church should evangelize unapologetically from a standpoint of strength saying, "we are the True Church, come and join us, but your theology and doctrine are being formed, not consulted."

Ecumenicism, as currently understood, has a, "Hey, let's compromise and see if we can come up with something we all like," approach. One might say that the only proper form of ecumenicism for the Catholic Church is evangelism.