IN 1965 POPE BLESSED PAUL VI WAS STILL HIGH ON THE DRUG LIKE EUPHORIA OF THE CONCLUSION OF THE SECOND VATICAN COUNCIL AND CATHOLIC TRIUMPHALISM WAS AT ITS ZENITH--ALL THIS WOULD COME DOWN CRASHING IN ABOUT THREE YEARS, 1968

A Protestant's Pre-Vatican II perception of the Church: 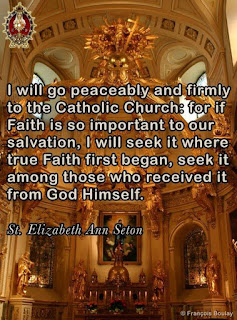 I don't blame Blessed Pope Paul VI for his pre-Vatican II triumphalism directed at the seemingly successful Second Vatican Council and what its document on the liturgy would do.

In 2018 we have 53 years of experience and now know that criticism of the laity as to how they participated in the pre-Vatican II Church was misplaced, sour and counterproductive. At least then, like Quebec a Catholic city, 95% of Catholics were at least bodily presnt at Mass if despite some disconnection from the liturgy itself. Today 5 % are there and who knows how many of those are disconnected from the liturgy itself!

This is humorous if it wasn't for the catastrophe we've had in almost every aspect of Church life since the pastoral council called Vatican II:


1. It is unavoidable that at the beginning there should be some confusion and uneasiness. It is simply normal that a spiritual and practical reform that affects ingrained and devoutly observed religious practices should cause confusion and that it should not always please everyone.  2. But a bit of explanation, preparation, assistance kindly given have quickly quieted uneasiness and made people understand and like the new order of things.  3. We should not think that after a while there can be a return to the former, undisturbed devotion or apathy. No, the new way of doing things will have to be different; it will have to prevent and to shake up the passivity of the people present at Mass. Before, it was enough to assist; now, it is necessary to take part. Before, being there was enough; now, attention and activity are required. Before, everyone could doze or perhaps even chatter; now all must listen and pray. We are hopeful that soon celebrants and people can have the new liturgical books and that their literary and typographical quality will be no less worthy than that of the former books. The assembly becomes alive and active; taking part means allowing the soul to become attentive, to enter into the dialogue, to sing, to act. The unity of a community action, consisting not only of outward gestures but also of an inner movement of faith and devotion, invests the rite with a special power and beauty. The rite thereby becomes a chorus, a concert; it takes on the rhythm of giant wings, soaring toward the heights of joy and of the divine mysteries.

"Passivity" at Mass? I could sing 5 Latin Ordinaries by heart at the age of 10 and we SANG the propers in a simple psalm tone for our school's daily Mass. I guess Paul VI didn't get around much. On the other hand "Gather Us In" has chased a lot of people out!

This Conciliar euphoria is very puzzling to me, and I have usually thought of it as the extension of the end of World War II euphoria, the idea of a new world order that will bring long lasting peace through nuclear standoffs between the major powers. Perhaps I am wrong, but it is just that major wars have always changed the worldviews of a society. Morally, we had that celebration through permissiveness following WW1 for a number of years, until the depression brought back reality. Marilyn Monroe became active immediately following WW2. The war in Viet Nam brought in the sexual revolution. People had enough of the ugliness of wars, and wanted to celebrate their present.

If true, one can view V2 as a product of its times, pretty outdated now, especially its new liturgy. Despite what Francis of the WW2 generation says, we need to go back to the regular Church of the ages, not the exceptional post WW2 euphoric Church.


Agree with the thrust of TJM's comment. Then and now, people are/were as active or, passive as they choose/chose to be. At least then, most attended even if some material percentage was lighting candles, reading prayers, praying the rosary or, enjoying 60-90 minutes of restful peace from their hectic lives. The fact of the matter is, they felt compelled to be there. Now, they don't. But, hey, let's continue to push the reformist agenda while at the same time, canonizing those who brought about this institutional and spiritual collapse.

Victor, I agree to a point. But, I believe the secular wave is a much stronger underlying current that will continue to sweep us along into God knows what. I hope that all of you who think there will be a return to the "normal Church" and traditional liturgy are correct, but I am not that optimistic.