HAVE WE, FOR THE MOST PART, ABANDONED THE ETHOS OF THE HOLY SACRIFICE OF THE CROSS--THAT OF JESUS' SUFFERING AND DEATH FOR THE EXPIATION OF OUR SINS AND INSTEAD EMBRACED A THEOLOGY OF THE MASS BASED SOLEY ON HIS GLORIOUS RESURRECTION?

It would seem if one is going to act out what is below the cross in this image at "the Eucharist", that the cross would be eliminated in favor of a "Risen Christ" Cross or an empty Cross, similar to Protestantism. And one wouldn't want to emphasize Christ's horrific suffering, still playing out as sinners commit sin, evil, blasphemy, sacrilege, genocide and the like, especially SOME priests and bishops (a minority btw) who corrupt their ministry in the most heinous way,  by actually being somber and penitential during the Mass to make REPARATION to our Lord, but rather we would want a convivial meal like atmosphere of joy and hospitality. 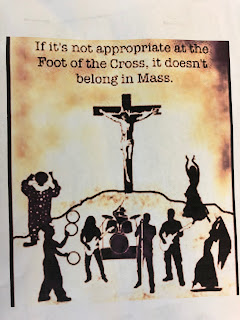 I don't think what is in the image above is appropriate for THE HOLY SACRIFICE OF THE MASS. Maybe that's the reason it isn't done in the Extraordinary Form.

Why in the name of God and all that is holy is it to be found very appropriate in the Ordinary Form "Eucharist"?
Posted by Fr. Allan J. McDonald at Friday, August 17, 2018

Or worse (as some wit, influenced by McDonald’s, has put it): From Holy Sacrifice to Happy Meal?

If that's not "appropriate" at the foot of the cross, then neither is Santa kneeling at the side of the manger bearing the newborn Christ child.

And neither is the "Tarzan Jesus" currently depicted on your masthead.

Still defending them (yourself) Fr. Anonymous?

The Tarzan Jesus is from the apse of the Basilica Shrine of the Immaculate Conception in Washington, DC where cardinals and bishops have celebrated Mass for decades. A at 11:59, what the hell are your writing about?

A11:59: it’s an icon, stupid! You ought to read the story behind it before waxing vindictive.

I know where the mosaic, "Christ in Majesty" by John de Rosen, is located - in the basilica where, after seeing it, the Blessed Virgin Mary said, "Build me a BEAUTIFUL church on this spot."

No, Kavanaugh, if it was a Tarzan Jesus he would have Obama sitting on his shoulder...

"No, Kavanaugh, if it was a Tarzan Jesus he would have Obama sitting on his shoulder..."

Not surprising in the least. But tragically sad.

Anon (Kavanaugh) @ 6:50: LOL! But, God help the Methodists, anyway. One day they may actually have a theology.

Kavanaugh, NO,may God help you! We'd all feel more comfortable if you became a protestant minister instead of masquerading as a Catholic priest.

The post wasn't about Methodists or Methodism, but about your recurrent racist remarks.

Ironic that folks like you squack about Racism when YOUR party is allowing more Black children to be killed in the womb. Doesn't that bother you, at all? I know you won't answer, because you can't

TJM - If Gene's racism had anything whatsoever to do with abortion I would reply.

As it does not have anything whatsoever to do with abortion, I shall not do so.

It's not "irony." It's your incessant and pointless attempt to turn any conversation you don't want to have into a discussion of abortion.

Gene's a racist! Lest' talk about abortion.

Doesn't work for me.

Can't you turn away from your sin (of racism) and be faithful to the Gospel?

Can't you turn away from your sin of voting for he Abortion Party and be faithful to the Gospel?

The Church does not teach that voting is a sin, even when the candidate may hold views that differ from those of the Church.

Yes the Church does teach that it is a sin to vote for pro abortion candidates, you just choose to be the cafeteria catholic that you are. Come to think of it you are in good company with McCarrick. Interesting