A Monk and Theologian Breaks the Silence on the Church's Metamorphosis 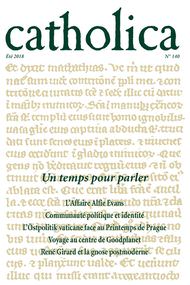 This is from Sandro Magister's blog at LaStampa:

“AMORIS LAETITIA” AND THE OBLITERATION OF THE SACRAMENTS

(passages selected from the interview in “Catholica” no. 140)

NOT DISCERNMENT, BUT CUNNING

The situation of confusion is evident. Naturally there are those who deny that this is a matter of confusion, maintaining that this is the positive result of a style of ecclesial governance aimed at “initiating processes rather than possessing spaces” (cf. “Evangelii Gaudium” 223). Therefore, the first discernment to be made would be precisely on the nature of this situation: can confusion, disagreement among bishops on sensitive doctrinal points, be fruits of the Spirit? To me it seems not.

To discern also means understanding if it is appropriate or not to initiate processes in certain fields, and also with what timing, modalities, and objectives.

Let us observe, for example, the manner in which the new discipline for the “divorced and remarried” was reached.

After Cardinal Kasper’s talk at the consistory had prepared the terrain so to speak, the two synods, with an intermediate year of heated discussions, were unable to give rise to a common approach on the problem discussed. Those who read the accounts of the “circuli minores” of the 2015 synod realize very well that on the point in question there was not a shared perspective.

But one thing is clear: that a large majority of the fathers had not developed the conviction to change the traditional discipline. So much so that the authors of the “Relatio finalis,” on the controversial point, took care not to introduce innovations.

But - here is another small step - they drafted formulas of an indefinite tone that, while not providing for access to the sacraments, changed the atmosphere so to speak. Thus the “non-opposition” to those hesitant formulas (which had trouble getting two thirds of the votes) was enough to allow another subsequent small step: a couple of ambiguous little footnotes in “Amoris Laetitia,” which do not affirm or deny but hint at a certain direction.

This further passage smashed the interpretive boundaries, until in the autumn of 2017 - another step - there came the pope’s official approval of the “Criteria” of the bishops of the region of Buenos Aires on chapter VIII of “Amoris Laetitia.”

But these criteria, if one is honest, are not a simple interpretation of “Amoris Laetitia.” They add and say things that are not to be found in “Amoris Laetitia” and that, above all, had never been approved at the synods and never would have been. […]

Thus, through small successive steps, over the course of three years a very large one was made and the discipline was slowly changed, but certainly not in a synodal manner, in my view.

I may be wrong, but this “modus operandi” is not discernment, but rather cunning. In place of reasonable and open debate (the famous “dubia” have never received a response!), the strategy of persuasion and of the fait accompli took hold.

Among the ethical demands and the sacramental foundation of Christian existence, the center is undoubtedly the sacrament, which is the communication to the believer of the grace that saves, and, in that it is welcomed by and transforms man, is also an act of glorification, doxology. […] Ethics is neither the first word not the last.

In “Amoris Laetitia,” however, the opposite logic is followed: the starting points are categories taken from the natural law and principles of general ethics (attenuating factors, the relationship between universal norm and subjective situation, non-imputability, etc.), and from these major premises are drawn the consequences for the pastoral practice of the sacraments.

In this way, the dimension of the symbolic and the sacramental, which should anchor, embrace, and transcend the moral sphere, loses its significance and becomes a mere appendix to ethics. […] The demonstration is given by the fact that in concrete terms the sin of adultery loses its public significance linked to the testimonial aspect of the sacrament, and can be remitted in the “internal forum” without any need to explain before the community why a spouse who publicly contradicts the sacramental sign of fidelity should publicly receive the Eucharist.

In short, the result of the decisions of “Amoris Laetitia” is the reduction of the sacramental to the moral, meaning of faith to ethics, which to me does not seem to be a mere question of pastoral practice. What is at stake here is something essential to the nature of Christianity.

I sincerely do not understand how a bishop, above all that of Rome, could write phrases of this kind: “There is no need to lay upon two limited persons the tremendous burden of having to reproduce perfectly the union existing between Christ and his Church” (“Amoris Laetitia” 122).

Here is the glaring exemplification of what I stated before in a general way: if the evangelical ethic is isolated from the sacrament and reduced to a general norm it becomes “a tremendous burden,” like the Mosaic law, instead of “an easy yoke and a light burden.” Whatever happened, in this perspective, to the transformative effect of the sacrament? […] So then we could ask ourselves whether the encouragement of bearing witness to faith in Christ to the point of bloodshed is not an even more tremendous burden, not to be placed on the shoulders of the people. […]

One arrives at this point only if one is accustomed to conceiving of Christianity - perhaps without fully realizing it - as ethics.

“Amoris Laetitia” goes so far as to say that even if according to outward appearances one is living in a condition of objective sin, on account of attenuating factors one could be in the state of grace and even “grow in the life of grace” (no. 305).

It is clear that if this is the way things are, the interruption between sacrament and moral action, as already highlighted, leads to outcomes that overlap with the Lutheran conception of “simul iustus et peccator,” condemned by the Council of Trent. […] In this way, one could be at the same time just (before God, invisibly) and a sinner (before the Church, visibly). Works are at risk of having no more significance in the “discernment” of grace.

CATHOLIC COMMUNION EVEN FOR A BUDDHIST?

The direction that is taking shape around intercommunion between Catholics and Protestants obeys the same logic: it is not symbolic realism that determines the decision, but the simple evaluation of the presumed interior condition: if a Protestant is presumably in the state of grace (based on the attenuating factors of invincible ignorance, diminished responsibility, an honest way of life, etc.), why could he not receive the Catholic Eucharist? Perhaps one does not realize that posing the question this way could lead to making the same argument for a Buddhist or a Hindu who lives a good and just life. Tampering with the relationship between morality and the sacraments ultimately can lead to ecclesiological conceptions that are not Catholic.

There is really no longer any excuse for bishops and cardinals to remain silent. How about a call for action from the Vatican on the mess in Germany? - for starters....

The picture at the top could be the triennial convention of the Episcopal Church, meeting in Texas this week, where among the things being discussed are "sacramental marriage equality" and revisions to their Prayer Book (their version of what we would call the Missal) to have more "inclusive" language. Wonder how many more Episcopalians will exit after this convention? The Church is about half the size it was when it peaked in the mid 1960s.

Anonymous at 10:14 makes me think of a solution to the ‘gender’ pronouns question for the Almighty. If everyone used ‘They’ it would solve that problem and be a HUGE step forward in eccumenism.

We are all Lutherans now....NOT!

Getting close though anonymous.... I figure it won't be long before they start pushing "the real presence is in the community of the people of God."

The Rubicon was passed by the modernist lobby when the Pope issued AmLet. The HF is disinclined to reverse what he probably thinks is a very well orchestrated second revolution post V-2.

The Catholic Church is threatened by a more rapid collapse than either of the defunct former mainline Churches. The Orthodox will survive the trend due to the Eastern European resistance to sellout their tradition. I am afraid, except for the SSPX and SSPeter plus similar minor priestly societies, the Roman Catholic Church is rapidly morphing into Neo-Lutheran project. The homosexual lobby and the crypto gnostic factions will soon be celebrating on St.Peter Square..