POPE BENEDICT STILL AS CLEAR AS A BELL IN HIS TEACHINGS: WHAT HE TEACHES YOU CAN TAKE TO THE BANK (EXCEPT OF COURSE THE VATICAN BANK!)

Pope Benedict still looks good and he looks so much better than Saint Pope John Paul or Blessed Pope Paul VI or even Pope Pius XII did at the end of their papacies. Thus this begs the question, did Pope Benedict resign, not from any external pressures, although surely these were there, but from depression, clinical depression over the state of the Church and in His Holiness' depressed state, felt he had to resign, an internal feeling, but pressure nonetheless.

We all thought he was terminal three years ago. But he looks better now than then! This photo is from a Mass he celebrated this past Sunday, August 30, 2015: 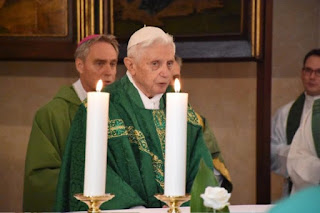 And here is an article on what Pope Benedict said this past weekend, what he taught and with such clarity and without ambiguity:
By Andrea Gagliarducci
Vatican City, Sep 1, 2015 / 03:01 am (CNA/EWTN News).- When Benedict XVI said Mass on Sunday for the annual meeting of his former students, his homily focused on how God's Word frees us from the forgetfulness of a world that no longer even thinks about God.

The Ratzinger Schuelerkreis has gathered annually to discuss topics in theology and the life of the Church since 1978, shortly after their mentor was pulled from academia to become a bishop.
Ratzinger participated in the Schuelerkreis until his abdication as Bishop of Rome; since then, he has come only for the concluding day of the meeting to say Mass for the group.

In his homily, which was delivered in German, Benedict recalled that three years ago the group had heard the same passage from the Gospel of Mark which was proclaimed in the Mass, and that Cardinal Christoph Schonborn had asked, “Shouldn’t we be purified from the outside and not only from the inside? Does evil come solely from the inside, or from outside as well?”

Calling it a very interesting question, Benedict replied to it in his homily, saying the answer must draw from the whole of the Gospel.

He asked whether the evil that attacks the Church comes from the world, and suggested: “We could say that we should respond with an exterior hygiene to the many maladies and, at times, epidemics which threaten us.”Such an attitude is necessary, he said, so that death cannot prevail; yet he also maintained that it is insufficient, because the “epidemic of heart” is interior, and it is this interior disease which “leads to corruption and to other dirty things, those that lead man to think only of himself and not of the good.”

“What makes man pure?” Benedict asked. “What is the true strength for purification? How do we reach a cleanness of the heart?”

He then explained that Christ told his followers they are pure because of the word he announced to them, and so it is the truth, love, and goodness of God which make man pure.

“May the Lord grant us this ‘cleanness of heart’ though the Truth, which comes from God: this is the strength of purification,” Benedict concluded.

The emeritus Pope was speaking to a group of some 70 persons: both the original Schuelerkreis of his former students, and a younger group of scholars who studied his work after he was consecrated a bishop.

This year's theme for discussion at the Schuelerkreis was “speaking about God in the contemporary world.”

Though Benedict was not present at the discussions, he is, in a sense, “always present among us, as we are in his footsteps, and as he always chooses the topic of discussion of our annual gathering,” Fr. Stephan Horn, who organizes the annual meetings, told CNA. He added that the former Bishop of Rome “was very lucid, and spoke for some time with each of us.”

The Schuelerkreis met this year at Castel Gandolfo Aug. 28-29, and was addressed by Msgr. Tomas Halik, a Czech priest and philosopher who has contributed to dialogue with non-believers. The group moved to the Vatican Aug. 30 for the Mass with Benedict.

Msgr. Halik told CNA he was “particularly impressed by the members of the Young Schuelerkreis: in them I saw the spirit of the young Ratzinger.”

In his lectures, Msgr. Halik said that “many say that Christianity is living a decay, while others say that it is completely dead … in my view, we are living the afternoon of Christianity; that is, Christianity is now having a siesta, a little rest.”

Following this afternoon, Msgr. Halik believes there will be a new day: recounting the traditional understanding of the day as beginning in the evening, he said that the stars which appear while Vespers are said “are the beginning of a new day; so, there will be a new day for Christianity.”
He added that many non-believers “are in fact seekers, and the Church’s task is now that of accompanying these seekers.”

The priest's understanding was shared by the Schuelerkreis. Fr. Horn recounted that the group considered the crisis of current society, but found that there are reasons for optimism even within the crisis.

Following the Mass with Benedict, there was a ceremony to inaugurate the Pope Benedict Hall. It was announced that the Teutonic College will in November open a library dedicated to the former Roman Pontiff, cared for by the Ratzinger Foundation.
Posted by Fr. Allan J. McDonald at Thursday, September 03, 2015

My opinion, and I won't go into all the reasons I believe it so other than I think your observation spot on. To whit; yes, he did resign under pressure, physical perhaps, but pressure nonetheless, an observation which begs the obvious question and implication.

what ever happened to the dossier on the sexually active gay priests and employees working in the Vatican?

It seems to have been buried or burned.

What probably happened was: non-gay Vatican employees ratted on the gay mafia... putting names to paper along with their own in the reasonable expectation that the powers that be would fire the gay activists.

But what would happen should one of these deep moles have gotten access to this document? The potential for having a means of going after every 'rat' is enormous. it would allow them to know who's who and who to get rid of as well as know what secrets were revealed and by whom and how, so as to better hide their nefarious lifestyle.

A few highly placed bishops get canned and others get moved and presto chango, all the people who went on a limb to save the Church from the Lavender Mafia have probably been canned or 'retired' or fired....leaving only....the Lavender Mafia still in place like a tick only dug in more.

This sort of thing rarely ends well. It usually gets purged the hard way via outside persecution that scoops up the innocent along with the guilty.

When he ascended the Chair of Peter he asked us, (begged?) to pray for him that he would not flee from the wolves. We didn't take him seriously enough. We should have, he's a deep, deep thinker and said little that was not carefully thought out or with a purpose. The wolves wanted him gone, and the wolves won and while Francis may not be a wolf himself, he's a shepherd of the wolves choosing.

I'll bet that if a person looked carefully around Vatican City, such a person would come upon a "grassy knoll".

And if it really was a conspiracy, they'd have "done him in."

OK, so I talk of a conspiracy. Am I totally nuts to ask what happened to that dossier? Totally nuts to brut a probable scenario should it have been leaked?

Do you think conspiracy within the Church is impossible, improbable or unlikely?

The Planned Parenthood videos being dropped by CMP are the fruit of "a conspiracy" are they not?

So it's beyond question that conspiracies exist, they happen, and thus wondering about whether there are conspiracies active within the Vatican or not is no tin-foil at all. You'd need tinfoil to think there can't possibly be wheels within wheels at the Vatican.

But I wait with baited breath for you to show me why I'm off base.

Benedict should never have accepted his election as pope because he had a history of wanting to resign. If my memory is correct he asked to resign and retire from his duties under JPII at least 5 times. Each time Pope St. John Paul refused. But he tried not once not twice but 5 times to quit because he wanted to write and play the piano. That's not a shot at Pope Benedict but reality.

Jusadbellum - Of course "it's possible." It is also possible that little green men from Mars showed up one day and said, in perfect Latin, "Your holiness, you must resign or we will destroy the world. And you must tell no one the real reason."

Of course, it is possible...

You can't be shown to be "off base" of you are making things up. Save your bated breath.

Which scenario do you think is more likely:
1) the dossier is still secret and sits unused...
2) the dossier is secret but the pope is actively using its findings to quietly purge the Vatican of the gay lobby (the last Synod shenanigans and on-going scandals of gay priests in Rome notwithstanding).
3) the dossier was compromised and the targeted gay mafia is using it to blackmail/depose the prelates and priests who dared 'rat' them out and this explains the shenanigans in the last synod as well as ongoing scandals of priests caught in 'ahem' "situations" in Rome?


Which do you think is more likely

I think Obama has the dossier and will use it to get dates when he is no longer in the White House.