IS PROTESTANT CONGREGATIONALISM COMBINED WITH SPIRIT OF VATICAN II DEMOCRATIZATION OF PARISHES THE CULPRIT THAT LEADS STRONG LAY LEADERS TO GRAB POWER IN PARISHES? 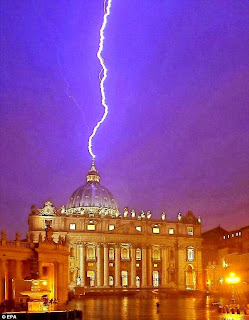 Anyone who knows American Catholic history knows that there was the Board of Trusteeism problem in the Church in the 1800's. In fact, my former parish of Most Holy Trinity was one of the parishes at the forefront of this in the 1860's which may have caused it to lose the possibility of it becoming the cathedral of the diocese. The pastor become bishop who built the new church there wanted it to become the Cathedral as Savannah was a cesspool of yellow fever!

But I digress a bit, although the problem in the 1860's may have well be caused by the fact that lay Catholics envied their Protestant neighbors who operate on a board of trustees model and the power in churches is centered on the laity who hire and fire their ministers.

Fast foward to two little parishes in Eastman and McCrae in our diocese and my Macon deanery. A small minority of lay leaders there, perhaps the "founders" as though founding members in a parish have more clout than others and as if it isn't Jesus who is the Founder and the bihsop who allows parishes to come into existence, claim a power and moral authority over and above the bishop and the pastors he sends to them.

Is this based on two things? Protestant congregationalism fueled since Vatican II by an ecclesiology that has tended to clericalize the laity and laicize the clergy? Pope Benedict tried mightily along with St. Pope John Paul II to end this silliness in the Church.

It also happens on finance councils and school boards.

Of course the Catholic Church isn't a democracy but when we use democratic principles in our councils and synods, like the marriage synod in Rome, doesn't this become quite divisive?

No...weak Priests and Bishops allow this to happen.

One church I have attended put out a bulletin preparing parishioners for the "New Rite for Sunday Celebration in the Absence of a Priest" The "New Rite" was approved by USCCB in 2007. I think the extraordinary ministers and parish councils and parish life directors have succeeded in their mission. They replaced their Priest.

I once had a man invite me to his parish, doing so by openly bragging that "We don't need a priest." I stared at him, dumbfounded. He quickly looked uncomfortable and left. Catholics who engage in this kind of Protestant behavior do not even realize what they are saying, and only get uncomfortable when confronted with the absurdity of their statements.

I agree with Gene on this one.

And there's another memo that some may have missed...it says that we white American Catholics should be prepping for more and more priests who don't look like us (Think "Fifty Shades of Brown".) or talk like us (Think "ESL".)

And there's WAY too much dissing and trashing Protestants. We are to love our neighbors as we love ourselves.

Why are you running out of priests? We have so many in my diocese that it's hard to find a place for them all.

Gob, we love Protestants so much that we want them to convert to the Catholic Faith so that they can more readily reach salvation through the reception of the Sacraments. We are trashing them because their heresy rips people away from the bosom of Holy Mother Church and risks the damnation of countless souls.

My previous parish had the same discussion about holding "services" without a priest some years ago. They seemed excited about it. I don't think much came from it as I don't recall that contingency being needed. I think it is not a bad idea to have such a service available, but it should be very different and emphasize the absence of the priest and consecration to drive home the need.

I do think there is a lot of weakness in priests when confronted by the laity who feel empowered by some interpretation of Vatican II. This seems to flow from a lack of support from the diocese who seem interested in the numbers of people in the pews rather than the numbers of Catholics.

Father, you don't know the half of it. We have a parish in your very own diocese where a member of the parish council led an effort to destroy a priest. How?

Generating false publicity about the priest

Using OTHER PRIESTS in the diocese as advisors in the subversion

And, of course, the usual tool of gossip. Deacons from this parish were also enlisted. And of course, everyone on this list would only respond with, "Who, me?" if the subject were broached. They cover it all with a smile, cloaked in the mantle of respectability. They are killing their own parish.

And they think the rest of us don't know.

Why don't we all just become Episcopalians right now!

That seems to be the prevailing opinion from the very top down to the bottom in the Church. We want things to look semi Catholic but not to much. People don't want liturgy that is dignified and overtly Catholic but just with a tinge of Catholicism. We want to promote the Gospel, but ignore it when it interferes with modernism.

I mean really it is ridiculous what is going on in the Church. Bishop after bishop calling for the most scandoulous things. Entire bishops conferences calling for recognition of sodomy etc. The truth is being attacked and maligned daily. Nothing is being done to stop it. And the TRUTH is that this pope is making things worse. He isn't clearly teaching the Catholic Faith. He compromises it at every available occasion. Modernism has won. That is the truth. Modernism has won. Why not stop all pretense. Just throw the bible and the cathecishm into the garbage can and tell everybody that anything they want to do is fine, nobody goes to Hell except people that actually believe what the Church has always taught. Just tell the laity to keep the checks comings, turn off the lights and everybody go on a cruise and do whatever the hell they want to do. That's basically what we have.

Anonymous, does this mean it is ok for me to look at nude pics of Charlize Theron?

You should pray for the virtue of hope. Perhaps you even need faith.