Let's say a time traveling  well-formed Catholic in all aspects of Catholic life, embracing his faith as an adult, but fully immersed in the Mass celebrated this way from the 1950's point of his origin: 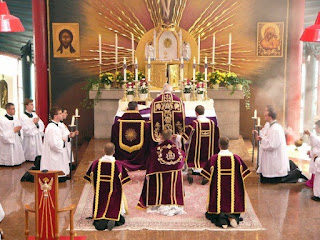 But then his time travels brought him to the 1970's and a Mass like this: 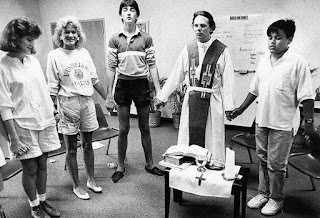 And then he went forward to the 2000's and experienced the Mass like this: 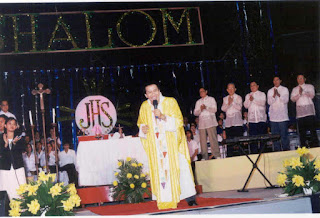 And then after his experiences of the Mass in most places in the USA in 2015, he reads the following which he had never read before:

"In order that the Christian people may more certainly derive an abundance of graces from the sacred liturgy, holy Mother Church desires to undertake with great care a general restoration of the liturgy itself. For the liturgy is made up of immutable elements divinely instituted, and of elements subject to change. These not only may but ought to be changed with the passage of time if they have suffered from the intrusion of anything out of harmony with the inner nature of the liturgy or have become unsuited to it." (SC 21)

To which two Masses pictured above and the whole host of other Masses he experienced from 1970 forward would he think this paragraph refers if he did not know the date of the writing of the paragraph?

Suppose a Catholic embarked on an expedition to Antarctica in 1964 and returned three years later in the summer of 1967. Revisiting his parish he would barely recognize the service as a Catholic Mass. The language would be different (in 1964 the mass was still in Latin; by 1967 the last vestiges of Latin had disappeared in most parishes). The Canon, shorn of most of its ritual actions was now recited aloud in the 'dynamic equivalent' version we had to endure until 2011. The priest no longer faced the altar but now faced the people. A chair was placed for him in the sanctuary where he sat (still facing the people) in his new-fangled role as 'presider' over the assembly while lay people trooped up to read the lessons. If our returning traveller attended the principal Sunday Mass he would note that the celebrant no longer sang anything. The congregation sang hymns (the term was sufficiently flexible to encompass such traditional ditties as 'Kumbaya' and 'Michael, row the boat ashore'. There might be a sung Ordinary in faux-folk style accompanied by guitars, but no chant and no incense. After Mass the priest, instead of returning to the sacristy made straight for the exit where he stood ready to glad-hand the congregation on their way out, still clad in his Mass vestments.

The fact that such radical changes had been imposed in such a short space of time was both astonishing and unprecedented. The Consilium in Inter Oecumenici had been concerned that the faithful might resist the changes so they had to be introduced incrementally. Some were enthusiastic (especially middle-class Catholics, who had actually read the Council documents and revelled in their new-found importance). The majority were confused and bewildered. This was recognized by Cardinal Heenan, Archbishop of Westminster, who at first reassured people that the changes would be minimal. When this proved not to be the case he assured them that with the promulgation of the new Mass in 1969 there would be no further changes in their lifetimes. Within a few years we had Communion in the hand, EMHC and altar girls. To give him his due he secured the 1971 Indult which allowed the occasional celebration of the Old Rite. It's clear from the wording that Bugnini was not happy with this, and actually wanted the 1967 changes incorporated, which as we have seen made it a new Mass in all but name. This didn't happen - all the Indult Masses I attended used the 1962 Missal.

What would he think?

What would he think?

"Where has the Church gone?"


"How could this happen?"


"Why are all of these silly people blindly going along with it?"

Let's take our time traveler in the other direction, back to 1600. The liturgy of 350 years before the 1950s would be more familiar to him than the one from the late 1960s. In fact, were we to take him back 1000 years, that liturgy would _still_ be more familiar. 1500 years? probably the same answer.

But there was no rupture in the 1960s. None at all. Period. End of discussion.

Suppose you brought your car in to a shop to be 'restored' and came back the next day to discover that the engine had been replaced from a V8 to a 4 cylinder, the body replaced from a Suburban to a VW bus, the layout of the seats shifted, and a new owner's manual (to accompany the new engine and body work) sat on the seat in Spanish.

It's still a car and it's still YOUR car - same license plate, same VIN number. It still drives you from point A to B and might even get better mileage.

Has it been "restored", functionally replaced or heavily modified?

I suppose - if the tires were the originals as well as the chassis, one might be able to claim "merely heavily modified".

The kicker for me is that the Council's entire point, the reason it was held, the intention of everyone involved was to a) present a better, more approachable view of the Church to non-believers so as to lower the threshold to conversion and b) to restore elements of the faith lost which made it harder for Catholics to appreciate the full richness of their faith - the presumption being that current Catholics would not only STAY but become BETTER Catholics.

No one would have claimed in 1963 that their goal was to create a smaller Church that has even less social leverage and fewer members!

So to the degree this collapse or decay has happened, and to the degree it has occurred in every diocese that whole hog on the "spirit of Vatican II" we must conclude that the "pastoral" theory behind so much of the change was simply wrong. The egg heads weren't as smart as they looked.

You idiots. Don't you know that the New Mass is the Traditional Mass? That's what someone tells us here just about every day, so it must be true.

And the traveller would have seen nuns playing guitars in the sanctuary. I don't even remember the tune but remember seeing that for the first time and wondering when she was going to get yelled at.

'In setting forth its instructions for the revision of the Order of Mass, the Second Vatican Council, using the same words as did Pius V in the Apostolic Constitution Quo Primum by which the Missal of Trent was promulgated in 1570, also ordered, among other things, that some rites be restored to the original norm of the holy Fathers. From the fact that the same words were used, it can be seen how both Roman Missals, although separated by four centuries, embrace one and the same tradition. Furthermore, if the inner elements of this tradition are reflected upon, it becomes clear how outstandingly and felicitously the older Roman Missal is brought to fulfilment in the new.' (GIRM 6)

If one accepts this at face value, one can certainly argue that the Novus Ordo is the traditional Mass. Note that in neither the Latin nor the English is the word 'tradition' capitalized. However, not everyone can accept this at face value; nor are they under any obligation to do so. The first (1969) edition of the GIRM did not have this passage, nor any of the long preamble which connects the New Mass to 'unchanged faith' and 'unbroken tradition', and emphasizes the sacrificial nature of the Mass as defined by Trent and reaffirmed by Vatican II.

Instead, we have this: 'The Lord's supper, or Mass, is the sacred meeting (sacra synaxis) or congregation of the people of God, assembled, the priest presiding, to celebrate the memorial of the Lord (ad memoriale Domini celebrandum). That's it. It was only the intervention of Cardinals Ottaviani and Bacci that jolted Pope Paul into withdrawing it and revising it the following year. The original is still available but only in Latin.

Those who would argue that the new Mass is not traditional point to the original definition as representing the intention of those who authored the 'reform' and maintain the 1970 revision is basically window-dressing. It can also be argued that referring back to SC (as GIRM 6 does) is somewhat disingenuous since the Novus Ordo both textually and in the manner of its celebration went beyond what the Council asked for. For my part it by no means self-evident that the Novus Ordo brings to fulfilment the older Missal 'outstandingly and felicitously', all the more so since the older Missal was never abrogated and both Missals are currently in use.

So there are arguments on both sides. My own view is that the Novus Ordo, if celebrated in a way that shows continuity with the older rite(s), is an authentically Catholic liturgy. Whether in a majority of cases it is so celebrated is another matter.

Blogger rcg said...
And the traveller would have seen nuns playing guitars in the sanctuary. I don't even remember the tune but remember seeing that for the first time and wondering when she was going to get yelled at.

It had to be Kumbaya. That was mandatory at every Roman Rite Mass worldwide starting in about 1966. Surely there must be a papal encyclical on it somewhere.

It's a boldface lie when people say these new Sacraments and invalid mass are from St.Hippolytus.Its a LIE no such wriatings exist!Yes St.Hippolytus has writings but none describing in detail these new invalid rites.