PIOUS PLATITUDES ABOUT THE VERNACULAR MASS; ARE THEY TRUE? 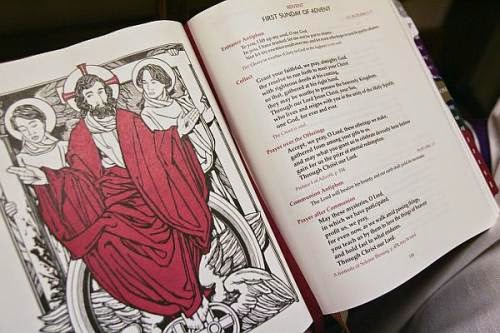 Commonweal Magazine has an article on the vernacular in the Liturgy and uses Pope Paul VI's first vernacular Mass in Italian as a starting point. Then comes a bunch of pious platitudes about what this accomplished.

The article is written by Rita Ferrone who lives in the Archdiocese of New York where it is reported that Mass attendance is now about 12% of the Catholic population. This means that 88% don't attend Mass. I guess there would be even fewer attending Mass if the Mass had remained in Latin.

There are many reasons why Catholic Mass attendance has declined. The root of it goes back to the immediate aftermath of Vatican II and what it did to Catholics of that period who then handed on either their function or dysfunction to subsequent generations. It seems that the dysfunctional Catholic crowd of the 1960's has won the day.

All of this has compromised the Catholic Church's ability to go out to the world with the Good News. So the pious platitudes in the article I reprint seem like a gross denial of the reality or patting oneself on the back for the small crowd today that does everything right because of the vernacular.

Don't get me wrong. I love the vernacular as a young teenager when it was first introduced in my parish and I love the new and glorious revised English translation we have today. I wish that some Latin had been mandated to remain and I think Pope Benedict had the recipe for it.

Fortunately not only does the EF Mass (what Pope Francis acknowledges is a part of the post-Vatican II Magisterium or patrimony and he himself calls but one form of the Latin Rite that has two expressions) preserve the patrimony of the EF's liturgical sensibilities and heritage, it also perseveres Latin and assist the Church with her vernacular liturgy to evangelize Catholics first and then the world.

This article just seems to limp and deny reality about Catholics and their need to be evangelized or re-evangelized and what Catholics are actually doing to evangelize the world. Catholics prior to the Council with a strong Latin Liturgy and strong vernacular devotional life and a strong belief in the Catholic basics as taught by the Baltimore Catechism were much more effective at evangelizing that we are today. In fact dissenting Catholics today who dissent knowingly or unknowingly reduce the effectiveness of Catholic evangelization.

Prior to Vatican II in this country, up until the 1960's, converts to the Catholic Faith was at an all time high especially in the African American Community--this with a Latin Liturgy. Will anyone like the author of this article care to explain this?

But here is the article from Commonweal: (read the comments at this link at the end of the article. They are a hoot, especially the first one!)

What the Vernacular Liturgy Says About the Church
Rita Ferrone

March 7, 1965, came to be known as Bloody Sunday in the civil-rights movement, as peaceful protesters in Selma, Alabama, were assaulted by police wielding clubs and tear gas. The same day, Pope Paul VI entered All Saints Church in the suburbs of Rome and said Mass in Italian. It was the first vernacular Mass celebrated by the pope in modern times. Pope Francis will mark that anniversary about two weeks from now.

At first glance, these two events seem to have nothing to do with each other. After all, what difference can it possibly make to the cause of racial justice that Catholics are now permitted to celebrate Mass in the vernacular? It was a big deal for the Catholic faithful and clergy at the time, to be sure. But we’ve gotten used to it. For many, then as now, its value seems to rest in nave and sanctuary and not in the streets. I believe a link exists, and is worth considering. The introduction of the vernacular was not only undertaken for the good of the people already within the fold. It was also intended as a pledge and a promise for the Catholic Church to reach out beyond itself, for the sake of its mission. Pope Paul VI said it clearly from the balcony of St. Peter’s on that day: “The church has made this sacrifice of an age-old tradition [Latin] and above all in unity of language among diverse peoples to bow to a higher universality, an outreach to all peoples.”

Use of vernacular languages in the liturgy is an outstanding sign of Vatican II’s famous “opening to the world”—the world not as a great shopping mall of delights, but as angry and wounded, a despairing world in need of the gospel of compassion and justice and joy. The world of the poor. The world of Selma. In the words of Gaudium et spes, the Pastoral Constitution on the Church in the Modern World: “The joys and hopes, the griefs and the anxieties of the men [and women] of our time, especially those who are poor or in any way afflicted, are the joys and hopes, the griefs and anxieties of the followers of Christ.” Too many Catholics tend to think of the document on the Liturgy, Sacrosanctum concilium, as one end of the spectrum, and Gaudium et spes as the other. They belong together.

Paul VI’s words surely resonated with missionary bishops and others on “the periphery”—the developing world, churches oppressed under communism, Eastern Rite Catholics—who took part in the debate at the council. Although they remained respectful of Latin, they were not convinced by the claim that Latin is the great “sign and psychological agent” of the church’s unity. Bishop Franz Simons of Indore, India, for example, pointed out with merciless clarity that Latin, which was supposed to unite, had actually become a source of division: between clergy and laity, between East and West, and between the church and the world. Patriarch Maximos IV Saigh, leader of the Melkite delegation, famously refused to speak Latin at the council, preferring to use French as a reminder to the Latin Rite bishops that Latin is not the language of all Catholics. It’s not as though these bishops didn’t prize unity. They did. But they wisely looked to the Holy Spirit to provide it through many tongues, as the Spirit provided it on the day of Pentecost.

We have vernacular liturgy but we may have missed what is most essential about it. Use of vernacular in the liturgy is a matter of mission and evangelization. When Paul VI celebrated the liturgy in Italian, it was a pledge to future generations that the church and her liturgy would lean toward outreach and mission. This is where the growth continues. The Mass Pope Francis will commemorate was the end point of a long journey; but, more important, it is also a starting point.

A liturgy “open to the world” is not a liturgy without structure or boundaries, but it is one that can extend hospitality to seekers, remove barriers to ecumenism, and speak in a language contemporary people can claim, own, and understand. It is a liturgy that takes place in a dynamic relationship with the world around us, for the vernacular languages are not “dead” languages; they continue to change as the communities that speak them change. The vernacular liturgy is a sign that our discipleship must unfold in the world. It is a promise by the church to be there for the people who actually need us.

This is not an analysis of the TLM, but a apology for the vernacular. It omits the reason for the revision of the Missal: that Pope JPII finally got a look at the translations and knew they were very wide of the mark. Mystical had nothing to do with it. My chubby little '62 Missal has English on a facing page or column for every Latin section. They could easily have petitioned for permission to use that page and retained every bit of mystical character as well as have some often beautiful English.

All this frantic wordsmithing, rationalization, and double-speak in an effort to justify the abominations of the OF remind me of a cat burying feces on a tile porch...

No-one outside PrayTell takes Rita seriously. It would, however, be interesting to know just how much of Paul VI's 1965 Mass was in Italian. If memory serves, the only parts that were in the vernacular at that date were those parts which involved the congregation. The Canon, for example, was only said aloud at concelebrated Masses and was in Latin until 1967.

I agree with John Nolan. Only Pray Tell blog and like minded friends take Ferrone seriously especially here in NY where she was director of the Catechumenate under Cardinal O'connor (when she was more moderate). It sounds like she was inspired by the movie "Selma" though I do not see the connection unless we are getting nostalgic for the '60's. I think that in a world where Christians are being beheaded as if it were AD 50 this topic lacks urgency and contains many straw men ( ex: those who might advocate a Latin mass know fully well that Latin is not the only liturgical language, just as Roman Catholicism isn't the only Catholicism, but it is the language of the Latin/Roman Rite). And no, Latin isn't more "mystical"- but it is a direct link to history. For me, it isn't even about language but of sacred gestures: facing East, kneeling before the Son of God. And as for reality, there are serious issues here in NY especially with the Cardinal's closing of parishes and churches. Sad to see some people still living in the 60s.

"The introduction of the vernacular was not only undertaken for the good of the people already within the fold. It was also intended as a pledge and a promise for the Catholic Church to reach out beyond itself, for the sake of its mission."

A noble aim to be sure. The connection to Selma though has less substance than a gossamer cobweb.
Perhaps Ms Ferrone's next assignment could be to find a connection between the Lambeth conference and the rise of the Third Reich. At least from a spiritual-metaphysical perspective she might come up with some sort of credible tie-in.

There is nothing wrong with the Mass in the vernacular. The offering to God of the Sacrificial Lamb of His Son is alway pleasing to Him. Let's celebrate the Mass well so as to give back to God the worship, honor and adoration due Him.

I notice that Commonweal's Rome correspondent is none other than Robert Mickens, sacked by The Tablet (UK equivalent of NCR aka Fishwrap) for making offensive and tasteless remarks on-line about B XVI. Draw your own conclusions.

So how does Francis propose to commemorate this momentous event? By saying Mass in Italian? He does that anyway, and furthermore it's not his vernacular. Perhaps he will say a Mass which includes all the available translations (including pigeon English), changing after each sentence. A Babel Mass. Why not?

Thanks for the link. It's funny, in a sad sort of way, how every discussion about use of the vernacular gets muddled up with the Novus Ordo. They're 2 different issues.