SOUNDING THE ALARM AND SETTING THINGS STRAIGHT! WE WILL NOT RETURN TO 1968!

This is from an Italian blogger with great common sense as we ITALIANS are prone to express! His blog is VATICAN Monday:

Pope Francis: An Agenda Behind his Back? 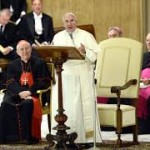 The Pope is naive? Shish!

The Russians, in the 19th. century, used to say if our Father the Czar would know what is going on he would do something about it! Later, Stalin's name was put in place of the Czar's. Things never change; the masses are gullible in every century in every place.

I agree with John above, there is absolutely no way the Pope is THAT naive.

It has basically come down to this as far as I am concerned; Francis can say or do whatever he wants, but if his words or actions violate Catholic Doctrine then I refuse to obey him. He isn't a god.

We will keep reliving the "Spirit of '68" (or whatever year) as long as the "permissives" cajole the population to revisit doctrinal matters from another approach in the false hope of getting another answer -- especially false permission.

Seduced by Satan and baptized in moral relativism, the "permissives" will never stop testing the perimeters for hypocrisy and stewards who have strayed. They'll say: "That old book of fairy tales, written by goat herders in the bronze age is irrelevant." With all of these false permissions relevancy, to many, appears to be a long ways away.

This is avery disturbing article and certainly is Italian in its strong hints of intrigue and conspiracy. It insinuates that the Pope is using operatives to test public responses then adjusting his behaviour to manage the negative reactions. A combination of hegemony and plausible deniability. In USA politics this is called the Third Way. A sort of Hegelian Dialectic in a controlled environment.

I am not prepared to accept this level of cynicism exists in our Pope. While he may not be naive, I do think he is personally hampered by a restricted world view. No man who becomes Pope can have seen everything and have a plan for everything, it is the Holy Ghost that guides his response to the unknown and helps him grow for our example. That is why we must always pray for the Pope and his intentions.

We have snow in Atlanta this morning...perhaps a reason to move the State Capitol 85 miles down the road to Macon, in the geographic center of Georgia?!? Seems like Macon to Atlanta is the divide between rain and snow often in Georgia...

To me, the quoted article seems fatuous, not having myself seen any convincing evidence that our Holy Father is naive or uninformed or subject to any agenda other than that he himself sets carefully. Why not assume that what we see is what we've got--a pope who says what he intends to say, with the effect that he intends to have, and surrounds himself (as do most popes) with those who will further his genuine intentions?

I was in Augusta yesterday and departed this morning. They were to get snow this morning and I thought for sure I would be stranded there and not be able to return to work today, but no such luck, it was 42 when I left, 38 in Thompson toward Atlanta and now 43 here in Macon. I love snow days!

The Pope is not naive…he knows exactly what he is doing.

Father, speaking of Augusta, we're counting on you to deliver some nice weather down there Easter and the week after----I hear there is some tournament going on down there---at 2604 Washington Road, corner of Berckmans---between April 9 and 12. Would not want to be dodging cold and rain that week...

I think you mean Thomson, right? Without the letter "p" between m and s? Often misspelled name!

Thomson (a town @ 30 miles west of Augusta, Thomasville (a town in deep south Ga. a few miles from the Fla. line), and Thomaston ( a town in Upson County west of Macon) have always confused people trying to get directions in our state.