WHY ONLY 12 PERCENT OF CATHOLICS GO TO MASS 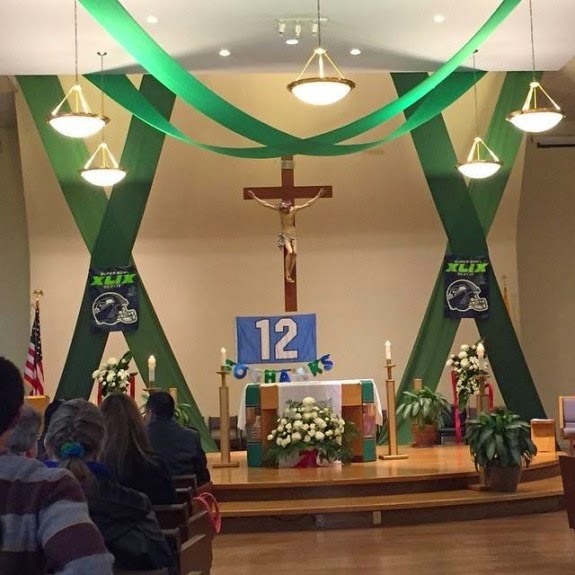 There is a video of this Mass on YouTube, but I can't bring myself to post it but I will link it here.  Skip ahead to the last two minutes or so.

Is there any wonder why over the last 40 years of this kind of nonsense some as exaggerated and some much less so, that only 12 percent of Catholics take the Mass seriously enough to actually go and of those 12 percent there is a significant number who like this!

This is just one more exxagerated abuse amongst many abuses concerning the Ordinary Form of the Mass over the past 40 years.

Where is this priest's bishop who allows such things because people like it, apparently, because they are laughing and giggling as at an entertainment venue!?

Shouldn't this priest be reprimanded and publicly, perhaps suspended for a time and sent to intensive care as to how to celebrate Mass, maybe made to celebrate the Extraordinary Form exclusively and learn the decorum that is necessary for any form of the Mass.

I just can't imagine anyone doing this during the Extraordinary Form of the Mass. Maybe I'm wrong, but I just can't imagine it. But some priests think the Mass is their toy to do as they wish, the ultimate form of clericalism. It can be small, like priests who take liberties in changing the words of the Mass simply because they happen to think they can to others who do what is pictured above.

SAVE THE LITURGY; SAVE THE CHURCH!
Posted by Fr. Allan J. McDonald at Tuesday, February 03, 2015

...meanwhile in Communist China were it's illegal to belong to a Catholic Church in union with Rome, there are altar boys and incense...http://www.huffingtonpost.com/2015/02/02/china-communist-party-atheism-zhejiang-ban-religious-members-christianity_n_6599722.html?ncid=txtlnkusaolp00000592

Because if the price of being Catholic can be paid in blood, you don't water it down. If I'm going to be sent to the gulag, then I'd rather get the 100% traditional version of Catholicism, that which generated most of the saints and martyrs with whom I seek to be 'in communion' and not some wishy washy, watered down soup liturgy designed to make everything look provisional, cheap, and ad hoc.

2,000 years of heroic faith life, the liturgy as 'source and summit of our faith' and yet it's made to look ad hoc, provisional, almost an afterthought? Yeah, I don't think so!

The Archbishop is currently convalescing from neck surgery. I live in this archdiocese, and unfortunately, this is not in the top 5 worst things I have seen or experienced here.

As we all know, the problem emerged after V-2. The reform of the Mass inevitably lead to the destruction the Catholic priesthood.

Before the council, the TLM helped shape priestly attitudes of piety and demeanor, in Church and in the world. Such priestly formation is only available now in the priestly societies' seminaries devoted to the Vetus Ordo especially (and the SSPX?).

Football Masses are not the worst offenses at Sunday worship. The source and summit of Christian worship has become trivialized, ideologized, and otherwise exploited by a modernist Church more concerned with secular matters.

"I just can't imagine anyone doing this during the Extraordinary Form of the Mass."

In my over a half-century of TLM attendance dating back well before Vatican II, exclusively EF then and exclusively EF on Sundays for the last decade or so, I've never seen nor personally heard of any priest doing anything whatsoever the least bit frivolous or silly during a TLM. It's just unimaginable that a priest celebrating the TLM would take it as something less "serious as a heart attack."

I don't know, what are the statistics for church attendance and how it correlates with wealth? Do not the more impoverished attend more regularly? America and the West are the most affluent yet their attendance and faith is least. Maybe a great depression will bring the people back. Throughout the Old Testament, God had to humble the people to bring them back.

Whenever you see a priest do or say something silly or frivolous during an OF Mass, I think you can be sure that, whatever he might say he believes, he does not really believe what the Church teaches—that the Sacrifice of the Mass “is the sacrifice of the Cross perpetuated down the ages” (Ecclesia de Eucharistica 11, Sacrosanctum Concilium 47)—nor that he is offering sacrifice to God in propitiation for the sins of men. What other explanation could there be?

The link to the article about the persecuted Christians in China attests to what persecution tends to do to any population: it purifies it.

Only true believers will risk everything to meet together so their 'faith' (in anything) is purified to the essence of whatever that happens to be.

Thus it is in every local or national Church that has experienced a bloody purge and persecution. There is an initial 'falling away', a period of turmoil and chaos... a relatively long period of brutal persecution moving from the capital to the frontiers and then a long slow process of believers coming out of the catacombs.

In England the persecution didn't really end until the French Revolution on account of so many French nobility fleeing to England and bringing their chaplains with them. Word spread and soon English Catholics were coming "out of the woodwork" (a reference to priest-holes) to attend Mass at these safe French embassies.

A remnant always survives. But woe for the cost of this survival!

qwik - At least for the recent great Recession there was no impact on church attendance accd to the Pew Research Center.


I see Satan dancing in the End Zone around the table.

While not as bad as this "performance" I went to the local cathedral last Sunday where the permanent deacon gave the sermon. First up he mentioned his grandchild who had been born with serious difficulties but had recovered - photos of the child were flashed onto the overhead screen; after that he decided to read comments from a dying Protestant evangelist that he thought was uplifting - the script of these plus a photo of the dying man were flashed on to the screen.

The deacon then said he would finish off with a modern rendition of a psalm. With that the words of the psalm (presumably rewritten by him) were flashed on to the screen and we were then treated to a recording of him - the deacon - singing the psalm while he looked admiringly on.

It felt to me as if he was in competition with the solo performer who had completed an Andrew Lloyd Webber type performance at Mass the week before.

At that point a large family in the row in front of me left, the father indicated he had had enough and would prefer to go to the SSPX.

No wonder many people have stopped attending Mass. I for one am tired of being part of a "captive" congregation who have no say in the matter and don't know what Mass is going to be like from one Sunday to the next.

Thankfully in this instance the congregation didn't appear to be enjoying the "performance".

Fr. K, I hope that is not your parish.

What are we supposed to be seeing? I want on the link but cannot find anything corresponding to the photograph.

Were there any new notes and scales when Beethoven and Mozart wove their musical tapestries? Did not the notes of the musical scales they worked with exist prior to their own existence into the world? Yet, though composers if today avail themselves of those self-same notes, they do not produce that which is comparable to the achievement of these two.
Is not a symphony or lone musician judged by how well and faithfully they reproduce the work of these masters ? The works of these composers are so well constructed that it is the desired end to reproduce them as faithfully and flawlessly as possible. Works so well crafted should be well played and performed such that both the performer and listener are pleased. If this is so, then how much more important is the celebration of the Holy Mass. It is true that the Eucharistic celebration has an intrinsic value and validity that transcends its form. Is it beyond reasonable to conclude however that God is more pleased when it is celebrated well and with great devotion?

Every time I am blessed to hear the EF I wonder how any one can go back to the OF.

This is a read for everyone! It's new too.

One should see what is done to a certain Catholic Sanctuary during a Boar's Head Festival. Picture: folding tables as a raised stage in front of the tabernacle (separated by a translucent glass aluminum wall), medieval-style costumes, pageantry and the altar moved forward as if it were a table in the way. I will have nothing to do with the proceedings. I think it is terrible what is done to the *Sanctuary*. If I recall the "Boar's Head" has a base in ancient Roman paganism and The Church Of England.

May God grant me the courage to say something about these proceedings to the priests.

Thank you Father Kavanaugh,
What about when a foreign people take over a land, forcing them to convert? Like the Babylonians. Does that strengthen the faith and turn the people back to God?

Qwik, Poland and Ireland survived as nationalities when their nation-states were annihilated by superior foreign powers only thanks to the leadership of the Church.

But it's a cautionary tale: yes, the faith survived, but the price in both cases as horrific and while it produced several generations of really zealous missionaries and home team diocesan clergy, the experience of being persecuted also made them blind to their own weaknesses. Thus in both cases great corruption existed in the shadows despite real holiness because of the fear of exposing one's dirty laundry to the hostile power. Putting the best foot forward is laudable but comes with a price.

Mexico and the Philippines are other cases - there too the Church held the culture together despite oppression and persecution, foreign invasion, occupation and cycles of civil war and violence.

But again, while the faith survived in a core group, the price to pay was tremendous in martyrs, displaced people, refugees, and untold numbers of lost souls.

That a local Church can survive is not the question. The question is always how many will be lost and is that a price we have to pay that some regain their senses?

Isn't a reconversion, a great awakening, a reform preferable to such draconian measures?

One would think that at least one of you holy, confession-going Catholics would have mentioned that the so called "Super Bowl Mass" photo shown is a total Photoshop fake....a fraud and a lie.