IF YOU ARE PLANNING TO GO AND SEE 50 SHADES OF GREY, READ THIS BEFORE YOU GO! 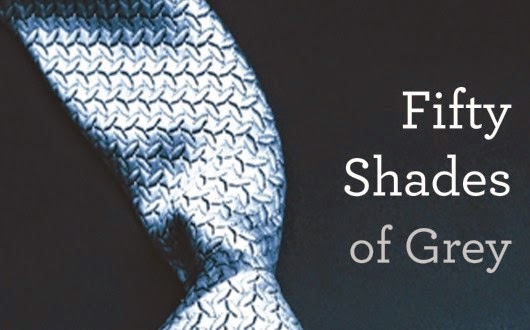 I am not a fan of the National Chismatic Reporter (NCR), but sometimes they have articles of value and I think the one below is one of them. Many people, especially young women, are going to see the movie 50 Shades of Grey and have read the book. I haven't seen or read either and don't really plan to do so. But I am sure some of my parishioners have or will.

Do they see what this former priest saw in the movie. It is a different perspective that I haven't heard with all the hype surrounding this movie. His take on it makes me want to go and see it, but I don't think I will:

I am an ex-Christian Brother of Ireland, ex-priest, survivor of sexual abuse, and advocate for thousands of sexual abuse victims for over a decade. Recently, I saw the movie, "50 Shades of Grey," but not for reasons one might suspect. I saw the movie because a preview I read mentioned that the title character was a victim of childhood sexual abuse. I was not interested in being titillated with images of intimate sexuality, nudity, or pornography. I was most intrigued by how the film would depict the life of a childhood sexual abuse victim, and I was not disappointed.

The movie I saw on opening night in a packed New York City theater was not about sex, despite all one might read about "50 Shades of Grey". The fifty shades of Christian Grey were unfortunate shadows hovering over a young, handsome man who seemingly had never received any counseling, psychotherapy or sympathy for the sexual violation of his innocence as a boy. The movie was about the “break” in the psyche of Christian which led him to fear intimacy, vulnerability, passion, and friendship. Christian needed an intervention by a compassionate advocate to help him understand how his life had ironically cycled out of control despite his efforts to control everything and everyone.

"50 Shades of Grey" is not a movie about kinky sex. There is hardly anything sexual about the movie. It is about abuse of power and its aftermath. Christian, a wealthy, handsome young man at the peak of his manhood is incapable of developing an intimate and meaningful relationship with a beautiful young woman who tries everything (including becoming somewhat of a sex slave) to get to Christian's soul. What she did not realize was that her boyfriend’s soul had been murdered as a child and, as a result, he could not emote as most normal human beings can.

I am hoping psychiatrists, psychologists, social workers, and other mental health professionals will view this movie and weigh in on its psycho-social and psycho-sexual implications. The “toys” that Christian possessed (women, cars, helicopters, ropes, chains, handcuffs, etc.) never brought him peace, security, or satisfaction. They exacerbated his profound loneliness, a loneliness that can be traced back to his childhood when an adult’s sexual abuse isolated him from the rest of humanity and made him feel shame and guilt.

I haven’t read a single review, summary, or article that warns prospective viewers that "50 Shades of Grey" might be triggering to those who have suffered childhood sexual abuse. Nor have I read a single article deciphering the reasons why Christian had 50 shadows hanging over him. In fact, the titillation factor seems to have taken over for the millions who have read the book and seen the movie, but as far as I am concerned, there was nothing titillating about the movie. There was sadness, anxiety, and post-traumatic stress disorder in the film, at least that’s how it struck me. I felt sympathy for both characters because the female could not get through to the male to prove her genuine love, and the male was incapable of being loved through no fault of his own.

When I left the theater after watching "50 Shades of Grey," I was disappointed that the real spark of love between Christian and Anastasia was never formalized in a love scene or in an act of intimacy. I had a hope as the movie progressed that Anastasia and her obvious love for Christian would bring him around, but he was not capable of accepting her love. I wondered as I sat through the movie if Anastasia would get to the heart of the matter and recommend to Christian that he be seen by a trauma specialist. Perhaps had Christian been able to trust (one of the principal traits taken away from a childhood sexual abuse victim) Anastasia, he could have come around. Unfortunately, that never happened, and he continued to live in his isolated world.

[Robert M. Hoatson is the co-founder and president of Road to Recovery, Inc., an organization that offers counseling to victims of sexual abuse.]

Not going to see that one, but I am looking forward to taking in The Second Best Exotic Marigold Hotel.

Holy guacamole, I absolutely agree with Fr. K on this one! TBTG.

He:" Why do you hang around with that sadist?"

"Fifty Shades..." is rated "O" (morally offense by the USCCB to those who remember) as is "The Best Exotic...".

I think that Pastors have a duty to their parishioners to stay up to date on the dangers that are out there...

One wonders what the USCCB rating of Shakespeare's "Romeo and Juliet" would be, or Chaucer's "Canterbury Tales," or, for that matter, Dante's "Inferno."

In Shakespeare, Chaucer, and Dante it was understood that these actions are perversions and are implicitly condemned through the manner of their presentation or through the outcome of the story. Chaucer's humor and sense of irony, in itself, highlight the perverse nature of the acts portrayed. Nowhere in these authors are the perversions encouraged to go "mainstream." Read more.

Fr., Thanks for posting this article. As a survivor of childhood sexual abuse who was once attracted to and participated in a sadomasochistic sexual relationship I found the author's comments to be fascinating and quite accurate as to the psychological reasons one might engage in such a relationship.

From what I have read of the film, "O" is the appropriate rating from the USCCB. This kind of "entertainment" is poison to the soul. I don't see that there is enough (if any) redeeming social value in the film to waste time or money in seeing it.

From what I've heard and read, I agree with the commentary. I've had no interest in the book or movie, nor does my bride. Interesting to note, however, that the strongest ticket sales for "Fifty Shades" have reportedly been in the Deep South. The lure of forbidden fruit....