IF BEING A PRIEST OR RELIGIOUS BROTHER OR SISTER (NUN OR MONK) ISN'T A HIGHER CALLING, THEN IT MAKES COMPLETE SENSE ONCE CATHOLICS ABANDON THE HIGHER CALLING THEOLOGY AND EMPHASIZE THE MAGICAL, MYSTICAL, BEAR-LIKE BAPTISMAL PRIESTHOOD OF ALL BELIEVERS THAT YOU'D HAVE FEWER WHO WOULD ANSWER THE HIGHER CALLING, NO?

IS THAT LUCILLE BALL ON THE LEFT ANSWERING A HIGHER CALLING WITH A HIGHER HABIT? 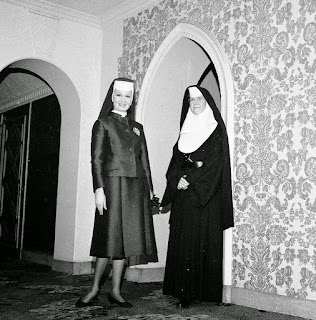 AND THIS NUN ANSWERED AN EVEN HIGHER CALLING: 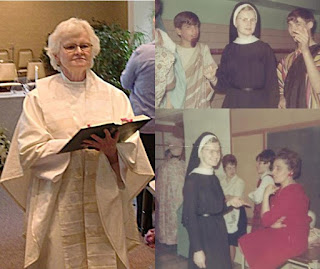 The collapse of religious life was not intended by Vatican II or the initial reforms. In fact, it was that "damn triumphalism" of the spirit of Vatican II that stated "infallibly" the prediction of a "new springtime" for the Church which included the renewal of religious life as well as the liturgy as well as the ecclesiology not to mention ecumenism, interfaith relations and relations with the secular non believing world.

As for religious life, the new springtime of renewal began with votes in various "chapters" of religious orders, and the triumphalism was that if the these religious discussed what they were going to do, prayed about it, asked for guidance of the Holy Spirit, then whatever the vote was, from removing habits and abandoning traditional apostolates such as teaching and nursing,  to living alone in apartments and finding secular jobs, all this had the approval of the Holy Spirit--triumphalism through and through as well as the mortal sin of presumption. And one wonders if God's punishment was  allowing these orders to decline and fall through such presumption. But I don't think the original concept of updating was mean-spirited or intended such a decline. Later reforms, though, may have had this in mind.

But the ideology of the magic of baptism of the laity and their priestly baptismal identity quickly led to religious nuns and brother leaving religious life as well as priests doing the same, often to marry those they began to work a bit too closely with. Thus the remaining leaders of religious orders and seminaries began to  say it was God's plan for this demise so the laity could take their rightful place in the institutional Church, by taking over schools and hospitals and being pastoral assistants and Eucharistic ministers and the like.

The likes of Fr. Donald Cozzens who would have been in his prime during the 60's revolution in the Church  recently wrote an article on clericalism and explicitly implied that there's no difference between the baptized and the ordained and being a priest isn't a higher calling within the baptized-- such nonsense. He doesn't think priests have any privileges, rights or entitlements in their higher calling. In fact, he hates the term higher calling, as do all progressive deconstructionists in the Church.

Fr. Michael J. Kavanaugh wrote...
Fr. Cozzens article (in U.S. Catholic) never said or suggested that there is no difference between the baptized and the ordained.

Baptism gives the laity a dignity equal to that of the ordained. It does not give them a function in the Catholic community that is the same as the ordained.

Cozzens specifically talks about, and warns about, some clergy members who think their ordination offers them privileges and entitlements that are not available to the laity. Ordination, some wrongly think, makes them "better" (not different, but better) than the lay men and women we are called to serve.

And, as we know, not servant is greater than his/her master.

But my final comments:

I find FRMJK's comment absurd. Priests have the privilege and yes, it is a privilege and entitlement to do things that the ordinary baptized lay priest can't. He can hear confessions and offer absolution; he can offer the Holy Sacrifice of the Mass and consecrate bread and wine into the Body, Blood, Soul and Divinity of Jesus Christ. He can preach. He can confirm in certain circumstances. He can anoint the Sick and offer the Last Rites. And if so called to an even higher calling, he has the privilege of expelling demons in the Church's Rite of Major Exorcisms.

And if a priest in his higher calling is called to the highest calling, that of being a bishop, he can ordain deacons, priests and yes, bishops and be the ordinary minister of Confirmation. He is also corporation sole of his diocese and has certain canonical rights, privileges and entitlements. What a privilege and entitlement and yes, right,  that is!

And sometimes, the baptized, be they Catholic or Protestants, respect that higher and highest calling and allow certain perks to the ordained, like housekeepers, freebees, medical assistance after office hours, no tickets for speeding, and the like. As long as the priest humbly accepts these and does not think he has to pursue these things in presumptuous way, these should be blessings not taken for granted but appreciated in humble gratitude.

A sad and tragic legacy of Vatican Disaster II. The aging nuns in the middle photo look like a real ragtag outfit - no esprit de corps.

I'm very happy to tell you that my daughter Laura, who received her First Communion from you in Macon, is graduating from Providence College this May and will enter the Nashville Dominican Sisters of St Cecilia Community in August. Her vocation is a miracle. She and we are so happy. This is a thriving community numbering over 300 Sisters, in full Habit, dedicated to teaching in schools all over the USA and now in Limerick Ireland and Australia. To say we are blessed is an understatement. Please remember her in Mass.

There also is an intrinsic dignity in the lay state that is denied when it's assumed that laymen's status is enhanced when they're assigned clerical duties as readers and and communion ministers and the like.

Tom, I have been to the Nashville Motherhouse and what a wonderful joyful place it is. And so many young sisters! God bless your daughter in her discerning of her vocation. If all religious orders would have renewed as the Nashville Dominicans we'd be in a better place today. Please ask your daughter to pray for me as I pray for her.

What wonderful news - so your daughter wasn't interested in the aging Sisters of the Pansuit Community?

Allan, I wasn't talking about the "privilege" of saying mass and neither was Cozzens. And you know it.

You add: "And sometimes, the baptized, be they Catholic or Protestants, respect that higher and highest calling and allow certain perks to the ordained, like housekeepers, freebees, medical assistance after office hours, no tickets for speeding, and the like. As long as the priest humbly accepts these and does not think he has to pursue these things in presumptuous way, these should be blessings not taken for granted but appreciated in humble gratitude."

There. Good Father, you have stumbled, possibly despite yourself, into understanding the thrust of Cozzens' piece. "As long as the priest humbly accepts these things..." is what Cozzens is talking about. But you and I both know that there have been and are some priests who understand their "higher" calling to be the basis for receiving such things and believe it is there priestly due.

That is clericalism and that is what Cozzens is talking about.

Fr. McD said, "As for religious life, the new springtime of renewal began with votes in various "chapters" of religious orders, and the triumphalism was that if the these religious discussed what they were going to do, prayed about it, asked for guidance of the Holy Spirit, then whatever the vote was, from removing habits and abandoning traditional apostolates such as teaching and nursing, to living alone in apartments and finding secular jobs, all this had the approval of the Holy Spirit--"

I recall reading about when certain saints who sought "renewal" of their religious orders, they typically attempted to discover and renew the charism of the original founder. For instance, when St. Teresa of Avila and St. John of the Cross wished to reform the Carmelite orders of women and men they wanted to return to observance of the "primitive" rule which had been relaxed in 1432. In other words, these "renewers" were concerned about certain laxity and drifting away from the charism and rule instituted by the founder of their order, and sought to return to the original spirit.

So it's mystifying to me that in the 1960's, all of these religious men and women, presumably knowing very much about their founders and charisms, actually thought becoming MORE lax and drifting away from the original charism was the way forward.

I wonder how many in their ranks stood up and shouted at the rest, YOU ARE WRONG! THIS IS WRONG!, and were voted down... Probably a lot.

Excellent! Thanks for pointing this out.

Rev. Fr. Ralph Wiltgen S.V.D.
The Inside Story of Vatican II: A Firsthand Account of the Council's Inner Workings; from this book I got the impression that Vatican II indirectly wanted to diminish the importance of religious life. That position was put forward by a powerful liberal voting bloc lead by the German bishops. It’s motivation was ecumenism. That was my impression, others could reach a different conclusion.

What would cause the bishops of the world to want to diminish the importance of religious life?

And how is this related to ecumenism?

"What would cause the bishops of the world to want to diminish the importance of religious life?"

I suspect it was because they wanted to engender more lay participation in the mission of the Church, which they saw as being dominated by a vibrant religious life.

"And how is this related to ecumenism?"

Whatever decreases differences between Christians promotes modern Catholic ecumenism. If Protestants do not have religious orders and instead promote active lay engagement in the Church by all the laity equally, it would promote modern conceptions of ecumenism to share these expressions of Christian life with non-Catholics.

I doubt the intention was to "diminish." Desiring more participation in the mission of the Church by the laity is laudable.

Ecumenism is not about decreasing differences - never has been - and that is not the goal of modern Catholic ecumenism.

In Ut Unum Sint, St. John Paul II wrote, "Christ calls all his disciples to unity." Unity is the goal of ecumenism because it is the will of Christ. (UUS 1)

He wrote further, "With the grace of the Holy Spirit, the Lord's disciples, inspired by love, by the power of the truth and by a sincere desire for mutual forgiveness and reconciliation, are called to re-examine together their painful past and the hurt which that past regrettably continues to provoke even today. All together, they are invited by the ever fresh power of the Gospel to acknowledge with sincere and total objectivity the mistakes made and the contingent factors at work at the origins of their deplorable divisions. What is needed is a calm, clear-sighted and truthful vision of things, a vision enlivened by divine mercy and capable of freeing people's minds and of inspiring in everyone a renewed willingness, precisely with a view to proclaiming the Gospel to the men and women of every people and nation." (UUS 2)

The purification necessary will involve recognizing the elements of Catholic thought and/or practice that can be changed in order to promote unity. Nothing of Divine Revelation or doctrinal truth has been or can be altered.