The oldest "set-up" of the altar and cathedra is contained in these two Basilicas, with the altar forward and under a "wedding canopy", resembling the wedding bed and the cathedra directly behind the altar against the apse.

St. Peter's prior to Vatican II had the Pope's Throne for Mass at the Altar of the Chair (at the apse) (with its altar hidden by the elaborate throne set up for the Pope, or better yet, the Chair of the Successor of St. Peter.) That custom has been lost in the post-Vatican II papal liturgies there as the pope's chair is now placed directly in front of the altar and which I say yuck: 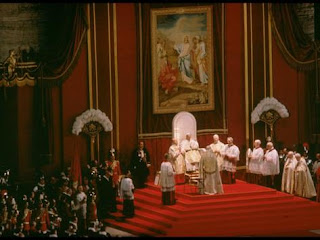 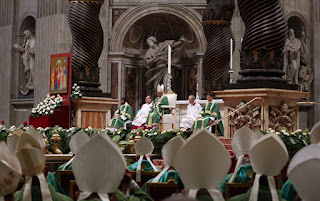 And here is glorious Solemn Sung Evening Prayer II for the Feast of the Conversion of Saint Paul:

Pope Francis presided at Vespers for the Feast of the Conversion of St Paul at the conclusion of the Week of Prayer for Christian Unity.
By Christopher Wells

As is traditional, Pope Francis presided over an ecumenical Vespers service at the Basilica of Saint Paul’s Outside the Walls for the conclusion of the annual Week of Prayer for Christian Unity. The end of the Week coincides with the Feast of the Conversion of Saint Paul.


The Song of Moses and Miriam

During the liturgical service, a cantor proclaimed a reading from the Book of Exodus, the “Song of Moses and Miriam,” which Pope Francis took as the starting point for his homily. The hymn was sung by the Israelites after they had been saved from the Egyptians by God, an event that many of the Church Fathers saw as an image of Baptism. “All of us Christians,” the Pope said, have passed through the waters of Baptism; and the grace of the Sacrament has destroyed our enemies, sin and death.” Precisely for this reason, he continued, together we are able to sing God’s praise.

But, the Pope said, as with Moses, “our individual experiences bind us to an even greater story, that of the salvation of the people of God.” Saint Paul, he said, whose conversion is celebrated in this liturgical feast, likewise had a “powerful experience of grace,” and this experience led him “to seek out communion with other Christians.” This, the Pope said, is also our experience as believers: “As soon as we grow in the spiritual life, we understand ever better that grace reaches us together with others, and is to be shared with others.”

The Pope explained that in recognizing the Baptisms of Christians of other traditions, we acknowledge that they too have received forgiveness, and that God’s grace is at work in them too.

“And even when divergences separate us,” he said, “we recognize that we pertain to the same people of the redeemed, to the same family of brothers and sisters loved by the only Father.”

Our growth in the spiritual life, however, is often a difficult one, the Pope said, and pointed to the suffering of Christians endured for the Name of Jesus. The Holy Father argued that “when their blood is shed, even if they belong to different [Christian] Confessions, together they become witnesses of the faith, martyrs, united in the bond of baptismal grace.”

Even with other religious traditions, the Pope said, “Christians today confront the challenges that demean human dignity: flying from situations of conflict and misery they are victims of human trafficking and other forms of modern slavery; they suffer hardships and hunger, in a world that is ever more rich in means and poor in love, where inequality continues to grow.” But, he said,

Christians are called to remember the history of what God has done for us, and to help and support one another, and “to face every challenge with courage and hope, armed only with Jesus and the sweet power of His Gospel.”

I agree with your assessment of "yuck". I could be mistaken but, I seem to remember Benedict attempting to remedy this on more than one occasion.

There cannot be Christian unity witthout the truth, we cannot misinterpret magisterial documents of the Catholic Church.

JANUARY 26, 2018
Hilary White and Massimo Faggioli interpret the Catechism, Vatican Council II and Letter of the Holy Office with hypothetical cases not being hypothetical : so there is a rupture with Tradition (with graphics)
http://eucharistandmission.blogspot.it/2018/01/hilary-white-and-massimo-faggioli.html

I guess when your shedding Catholics by the millions, you do this. LOL