LIONS, TIGERS AND HERMINE! OH MY! 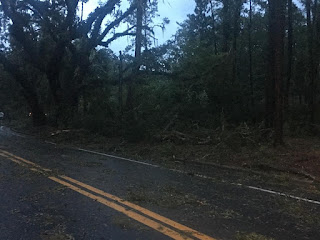 Last night there was quite a lightening show with thunder and wind gusts. That was just the beginning. About 3:00 AM I was awaken by a Tornado Warning Alert from my iPhone. I turned on the local metro Richmond Hill television station located in Savannah and sure enough rotation was detected above Richmond Hill. My rectory has windows galore and is built on a concrete slab and thus has no basement.

We were told by the weatherman to shelter in place by going to an inner room or basement (not many basements in the south, he should know that!) So I went into a bathroom located under a stairwell.

Fortunately the tornado didn't touch down in Richmond Hill proper, but in its metro area, Savannah had one touch down near a very exclusive area. Not much news on the damage other than downed trees and power lines. About 10,000 people in Savannah are without power.

I have the local news on which is just reporting on metro Richmond Hill and its suburb Savannah. I haven't heard too much about Florida and any major damage or deaths there.

We are still awaiting the major part of the storm to pass over metro Richmond Hill later this afternoon. So the fun hasn't begun in earnest. All our schools are closed. I am suppose to have Mass at 9 AM with several appointments. Should I cancel Mass which is in less two hours? My rectory is 8 miles from the church!

Here are some prayers I found the Archdiocese of New Orleans for storms and hurricanes and the protection of those in harm's way.

YOU MAY PRAYER THESE PRAYERS AD ORIENTEM OR TOWARD METRO RICHMOND HILL. I AM GRATEFUL FOR EITHER LITURGICAL DIRECTION:

Prayers for protection from storms, to prevent storms and to avert storms.

O God, Master of this passing world, hear the humble voices of your children.  The Sea of Galilee obeyed your order and returned to its former quietude; you are still the Master of land and sea.  We live in the shadow of a danger over which we have no control.  The Gulf, like a provoked and angry giant, can awake from its seeming lethargy, overstep its conventional boundaries, invade our land and spread chaos and disaster.  During this hurricane season, we turn to You, O loving Father.  Spare us from past tragedies whose memories are still so vivid and whose wounds seem to refuse to heal with the passing of time.  O Virgin, Star of the Sea, Our Beloved Mother, we ask you to plead with your Son in our behalf, so that spared from the calamities common to this area and animated with a true spirit of gratitude, we will walk in the footsteps of your Divine Son to reach the heavenly Jerusalem where a storm-less eternity awaits us. Amen. Originally dedicated to the victims of Hurricane Audrey in 1957.  - Fr. Al Volpe, Cameron Parish, LA

Prayer for Protection against Storms and Hurricanes

Prayer to Avert Storms and Hurricanes

Father, all the elements of nature obey your command.  Calm the storms and hurricanes that threaten us and turn our fear of your power into praise of your goodness.  Grant this through our Lord Jesus Christ, Your Son, who lives and reigns with you and the Holy Spirit, one God, forever and ever.  Amen.

Father McDonald, I pray that you and your flock are safe. I pray for the victims of the storm and all who remain in the path of the storm. Beyond prayer, there is one thing that everybody should do to enhance their odds to survive a tornado:

Wear a helmet (and wear googles to protect your eyes).

"Scientists at the University of Alabama at Birmingham (UAB) recommend a helmet to help prevent head and neck injury during times of severe weather.

"In 2012, following the devastating tornados that tore across Alabama the previous year, scientists at the UAB Injury Control Research Center (ICRC) published a research-driven commentary suggesting that helmets may prevent injury or death in severe weather situations and should be an essential addition to an individual’s tornado-safety preparations.

“The ideal tornado helmet would be a full-sized racing-style motorcycle helmet with a full-face shield, as it provides complete head and face protections and is designed to minimize neck injury,” said Gerald McGwin, Ph.D., director of the ICRC. “But any helmet is better than no helmet at all.”

After one of the most severe tornadoes ever to hit the United States ravaged Moore, Oklahoma, on Monday, about 15 student football players were found alive, wearing football helmets in the interior locker room of a field house at Southmoore High School.

So glad you are safe, Father. I was worried about you because I heard the Savannah area was going to get hit hard. Thank you for the posted prayers. I will reference those in the future. In Eastman this morning, lots and lots of rain, with leaves everywhere. The top of our chimney blew off. I was reading where windows are at risk of being blown out beginning with winds in the 60 mph range. Stay safe!

I have lived in several hurricane, typhoon, earthquake, flood, and avalanche areas. Ironically the most dangerous time and more lives are lost on average AFTER the event when people are checking out property damange and removing stray items. Be most careful afterwards!

I'm praising God that you are safe, Father! Continuing prayers for you and your parish...

Fr. McD: Here is a prayer against storms I just love to pray. In fact, I like it so much, I pray it every night as a part of my night prayers, storms or not.

(You bless yourself at every +)

This is what it says on the web: This Prayer Against Storms can be traced to a little known legend about St. Anthony. It is said that in the 13th century, a pilgrim priest visited a convent and church near Lisbon, Portugal which had been plagued by severely damaging annual storms. The pilgrim priest wrote a prayer for the convent and left it with the gatekeeper before he disappeared without a trace. The convents residents posted the prayer and were never harmed by any subsequent storms. The same prayer was ordered published by Pope Innocent III, which has made its way to your regular Pieta Prayer Book. In a private revelation, Our Lady supposedly revealed that the same priest is no other than St. Anthony.

BTW, every find those candlesticks?

When I was in high school, I memorised this from the Anglican 1662 Book of Common Prayer:

O ALMIGHTY Lord God, who for the sin of man didst once drown all the world, except eight persons, and afterward of thy great mercy didst promise never to destroy it so again; We humbly beseech thee, that although we for our iniquities have worthily deserved a plague of rain and waters, yet upon our true repentance thou wilt send us such weather, as that we may receive the fruits of the earth in due season; and learn both by thy punishment to amend our lives, and for thy clemency to give thee praise and glory; through Jesus Christ our Lord. Amen.

My dad's a farmer, and I grew up farming. Prayer for rain (or for the cessation thereof) are the only ones my dad has ever said.

Just came back here to see other comments, and reread my post. The typos in the prayer were in the original I found on the web. I didn't notice them when I copy/pasted it. I'm correcting them here: