YOURS TRULY AND THE NEXT POPE, CARDINAL TURKSON, TO BE KNOWN AS POPE PETER II! 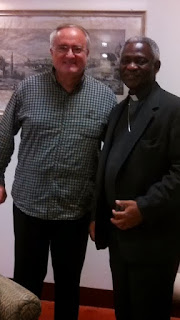 John Allen at Crux is predicting the next Pope either in continuity with Pope Francis, which he believes Cardinal Peter Turkson would be (although I have it from reliable sources that His Eminence likes the papal regalia that Pope Francis has abandoned, time will tell).

But John Allen in his article which I post below also likes Archbishop Konrad Krajewski, who runs the pope’s personal charitable outreach in Rome. I like him because he is a liturgical protege of Msgr. Guido Marini. I especially like how he reacted when Pope Benedict beatified Pope John Paul II. Archbishop  Krajewski is standing to the right of Pope Benedict and begins to cry in thanksgiving. It is quick and at the end of the video:


Turkson a credible successor to Francis, but not the only one

For those who will be looking to support continuity with Pope Francis in the next papal election, African cardinal Peter Turkson is certainly at the top of many lists, but there are other plausible candidates, including one who may surprise you.


Not that there was any real mystery about it, but Wednesday certainly confirmed that Cardinal Peter Turkson of Ghana is very much part of Pope Francis’ inner circle, one of those senior churchmen upon whom he most relies to carry out his agenda.

On Wednesday, Pope Francis created a new Vatican department for human development, combining several previous agencies including one for justice and peace headed by Turkson, who at just 67 remains one of the younger figures at the senior levels of Francis’ papacy.

Francis legendarily is his own man, far less dependent upon aides or advisers to craft his important decisions than most leaders who head important global institutions. Even so, looking around, there are a handful of key figures who clearly enjoy this pope’s favor and represent architects of important parts of his agenda.

Beyond Turkson, some of those figures include:

Italian Cardinal Pietro Parolin, the Vatican’s Secretariat of State.
Honduran Cardinal Oscar Rodriguez Maradiaga, coordinator of the pope’s council of nine cardinal advisers.
Cardinal Reinhard Marx of Munich, Germany, a key Francis ally in his two synods of bishops on the family and head of the pope’s new Council for the Economy.
Cardinal Luis Antonio Tagle of Manila in the Philippines, president of the global Catholic charitable group Caritas.
Archbishop Bruno Forte of Chieti-Vasto, an important theological resource for Francis.
Bishop Nunzio Galantino, secretary of the powerful Italian bishops’ conference.
Archbishop Konrad Krajewski, who runs the pope’s personal charitable outreach in Rome.
Archbishop Víctor Manuel Fernández, appointed by Francis as rector of Argentina’s Catholic University, and largely perceived as one of the pope’s ghostwriters.
Cardinal Sean P. O’Malley of Boston, head of pope’s commission for the protection of minors and a figure whose whose own personality and style clearly are in sync with the Francis vision of ecclesiastical leadership.

For Vatican-watchers, one unavoidable question implied by such a list of papal favorites comes down to this: Is there a possible successor among them?

Right now, there is absolutely zero indication of any health crisis around Pope Francis, any flagging energy, or any imminent end to his reign. However, merely as a thought exercise, Roman dinner tables sometimes find themselves occupied by curiosity over who might be best positioned to carry forward the Pope Francis project when Francis himself is either unable, or unwilling, to continue.

The central voting issue in the next conclave, which is the event when a pope is elected, will almost certainly break down along the lines of continuity or discontinuity with Pope Francis - in part because conclaves to some extent always function as a referendum on the papacy that’s just ended, and in part because Francis has set a bold course for the Church that has excited many in Catholicism and alarmed others who may feel it represents too much of a break.

What we might call the “discontinuity” party will certainly have its candidates, among whom someone such as Cardinal Robert Sarah of Guinea, currently the Vatican’s top official for liturgy and a staunch conservative on matters of doctrine, may well figure prominently.

The question is who the candidate of the continuity party may be, and there’s a good chance that at least in the early rounds, one of the figures listed above and associated with the Francis approach will seem the obvious choice.

Certainly, there’s a solid argument to be made for Turkson. He’s a polyglot, speaking multiple languages fluently, he’s charismatic and projects well on TV, and obviously there would a definite buzz around the idea of a “black pope.”

Moreover, he’s got deep credentials both as a local bishop and now as a Vatican official, and would be taken seriously as the kind of leader whose experience would position him to lead.

In all honesty, however, the pro-continuity camp might feel even more comfortable with Parolin, 61, who as an Italian and a veteran of the inner workings of the Secretariat of State just oozes a capacity to govern, yet whose kismet with Francis does not make him a stereotypical product of “the system” or the old guard.

The knock against Parolin, of course, is that electing an Italian might strike some of the electors most sympathetic to Francis as a step back, a return to an Italian-dominated Church not sufficiently aware of, or open to, the rest of the world.

In unpacking the possibilities, it’s important to remember that one defining feature of the continuity camp is a sense that Francis represents a healthy break with the ways of the past, moving beyond a stifling version of tradition that sometimes, these folks believe, left the Church hobbled in its ability to adapt.

They might be willing to think past the usual protocol that says to be a serious papal candidate one must already be a cardinal, and if that’s the case, here’s a plausible wild card candidate to be the one to pick up the Pope Francis mantle: Krajewski.

On the surface, it seems a silly idea. Aside from not being a cardinal, he’s also just 52, and conventional wisdom would say that’s far too young to be elected a pope - the last two were 78 and 76, respectively, at the time of election. His position also carries no real policy responsibility, so he might not posses quite the gravitas one typically looks for in a pope.

On the other hand, the possibility of resignation changes the calculus a bit, meaning you’re not necessarily saddled with a pope for life, and Krajewski has a great deal going for him. As a Pope Francis man, he’s obviously identified with the agenda of this papacy, but as a Pole he also represents a more traditional form of Catholic life that might be reassuring to some conservatives, and he also embodies the St. John Paul II legacy.

After the last week, in other words, two things now seem inarguably true. One is that Turkson is an important runner to represent the future of the Pope Francis project the next time the Church finds itself needing to pick a pope, and the other is that he’s not quite the only figure advocates of continuity with this pope could see plausibly stepping into that role.
Posted by Fr. Allan J. McDonald at Saturday, September 03, 2016

There is already a report that the Pope has signed an instrument of resignation that will go into effect this fall, possibly in October. The source is a Polish website and, of course, it probably cannot be substantiated. Here is the site, if anyone wants to bother to Google Translate it:

Who the hell cares which one of those spineless men becomes "pope". We currently have a man presumably validly elected pope who has said that people living in adultery don't have to change and can receive communion. Not one of them has rebuked him, including you Father. As far as I am concerned they have all betrayed Christ and deserve the reward that awaits them all. They may be laughing now but God will not be mocked. It is crystal clear that the future of the real Catholic Church is the SSPX. So you can keep your self absorbed sodomy loving, adultery condoning pope who sees sacraligeous communion as an 8th sacrament. You can keep him and his modernist bs. I am sticking with Christ and the teachings of the Church He founded as they have always been taught. But the great apostasy had to happen it's in scripture even though it is cut from the Lectionary for Mass, it is still in there and we are living through it.

Holy mackerel, Anon3:31. Who the heck do you think you are? I think you're a full-blown, certifiable right-wing wacko. Get some help....

Francis's inner circle are as untrustworthy as he is, and Turkson is the least orthodox of the Africans. As for styling himself Peter II (by tradition the last pope before the end of the world) all we would need is the Antichrist, since the Jews have returned to Zion thus meeting one of the three conditions.

As for John Allen, it was he who wrote an unbalanced and hostile biography of Ratzinger which listed a number of reasons why the latter would never be pope. I wouldn't trust Allen's judgement either - he is an example of that modern phenomenon, a self-styled expert who isn't really expert in anything.

My top 3, one of whom I pray will be next pope:
Cardinal Ranjith
Cardinal Sarah
Cardinal Schneider

Dan, Athanasius Schneider is only an auxiliary bishop so would not be in the running.

Sadly, the Church is paying the price for the excessive ultramontanism of the 19th century. It reached its apogee when Paul VI tried to impose an entirely novel liturgy on the West whereas his predecessors had merely tinkered with the existing rites (with unfortunate results).

We don't want another grandstanding mega-star like JP II whose choice of bishops was lamentable. Better a nonentity who worked behind the scenes to by-pass national Episcopal Conferences and appoint sound men who would be active in their dioceses to overhaul seminary training, ensure orthodox teaching in schools, and eradicate liturgical abuses.

Such men are out there and we all know who they are, but they rarely get preferment. Relying on one man to sort things out isn't going to work, and since the choice of pope is dependent on political and geographical factors the next papacy might be no less dysfunctional than the present one.

While all those mentioned are good, holy men, I feel that the next Pope needs to be strong and courageous and Cardinal Burke is the one who has shown such strong leadership during this crisis in the Church. Cardinal Burke will make a wonderful Pope.

Edgier25. Hmmmmm. Am I the only one who checked this "amazing" source?

What does it tell us? Well, using the word buongiorno, Pope Francis caused the world to freeze.

The election of Bergolio was "illegal."

Pope Francis is the antichrist.

Dialogue with the Jews is termed "ecumenical."

Um, no. This is interreligious dialogue.

Bergolio was honored by Rotary International, a secret Masonic organization.

Francis will abdicate in Oct or Nov. BUT WSIT! THERE'S MORE! His successor has ALREADY been chosen.

I don't know that I have ever read a bigger pile of Bologna in my life.