WHAT IS REFORM OF THE REFORM AND IS WHAT JONATHAN DAY'S PARISH MASS WHAT YOU EXPERIENCE ON SUNDAYS? 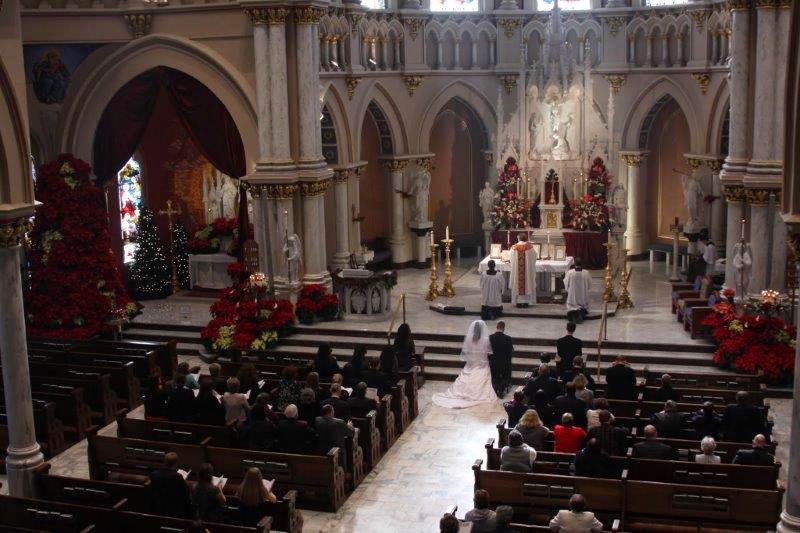 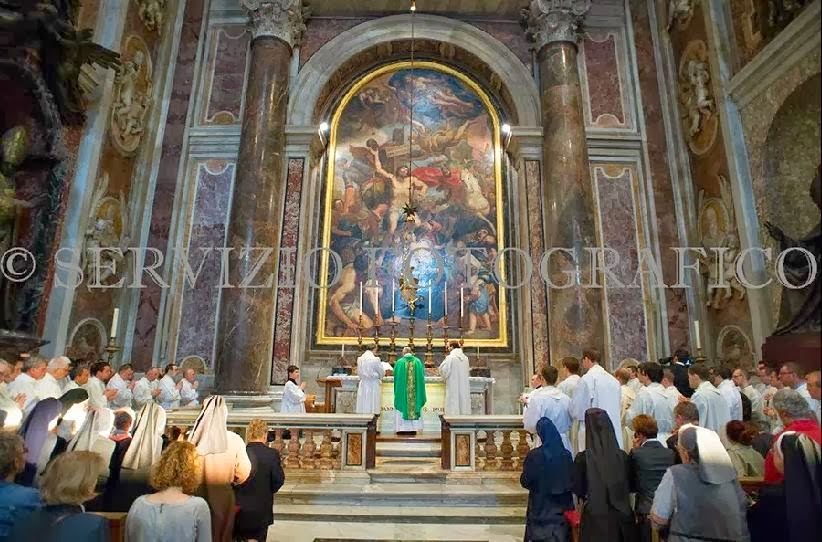 This is a comment Jonathan Day made at Praytell. He does not call it "reform of the reform" because this is the way his London parish has celebrated the Mass since 1970 with the revised Missal.
Maybe if every parish did it this way immediately following the publication of the 1970 Missal there would be no "reform of the reform" movement as we know it today. What do you think? Here is Day's comment:
I don’t think anyone here has claimed that that the postconciliar liturgical reforms are, by definition, perpetually irreformable, or that they could not have been less than perfect. The myth of an irreformable “Mass of all time” belongs elsewhere.
I have just come from a Mass, celebrated in the normative form, in Latin except for the readings, homily and prayers of the people, with beautifully sung, unaccompanied Gregorian chant, the sung propers (we use an English entrance hymn outside of Lent and Advent), incense, bells and simple solemnity. A newly ordained deacon joined an experienced priest at the altar; this was his first Mass in Latin, of this solemnity, but he adapted seamlessly … you might call it “continuity”. Everything done was in accord with the GIRM and the instructions given by the bishops of England and Wales. The Mass bore many similarities to the one celebrated by Pope Benedict when he visited Westminster Cathedral, though with a bit less pomp — only four altar servers, for instance.
The claim is not that “reform of the reform” is impossible. It is that it is unnecessary. The reformed liturgy may not be perfect (nor is the extraordinary form); but it is fit for its purpose: giving God glory and praise.
Posted by Fr. Allan J. McDonald at Monday, February 23, 2015

I can agree with this.

Father, I would be interested in your take on this series of articles discussing the Reform of the Reform. I'm sorry it is a lot, but thought you might appreciate the topic. Essentially (and I am not doing it justice) it contrasts the emphasis on solemn silence in the EF with active verbal participation of the OF out of concern that trying to merge the two one could very well end up "falling between 2 stools". Here they are appearing in reverse order on the blog.
http://www.lmschairman.org/search/label/Death%20of%20the%20Reform%20of%20the%20Reform

I also agree with Jonathan Day's final paragraph, except that I'd say his own parish practice (however long-standing) is "reform of the reform" in action.

In this sense, Mr. Day's parish has in effect practiced from the beginning the reform of the reform. However, to implement his parish's form of liturgy in typical Catholic parishes generally would involve a reform so huge as to hardly imagine happening anytime soon.

If I'm not mistaken, the church referred to is the Jesuit church of Farm Street, Mayfair. It is a fine gothic revival church with a sumptuously decorated interior. The high altar is by AWN Pugin. It's still in place but they made an exact copy of it to serve as a free-standing altar. Unfortunately ad orientem isn't possible as there is no footpace. There is a professional choir.

London churches with a musical tradition have tended to retain Latin, at least for their principal Sunday Mass. Farm Street is a good choice for those who like a sung Latin Mass but who find the Oratory a bit too 'lacy'. The preaching is also of a high standard.

If that is how the Novus Ordo was to have been offered, then why did Popes (beginning with Blessed Paul VI), particularly when they visited various countries, offer the Mass in the manner in which is common throughout the Latin Church?

Popes have offered repeatedly the Mass in vernaculars, with Communion in the hand, heavy doses of inculturation, lay readers, laymen offering Prayers of the Faithful...and so forth.

If the Novus Ordo was to be offered in the splendor of the parish in question, then why has Rome called for the reduction of sacred images and deemphasized the "triumphal" character of "worship spaces"?

Sorry, but Rome approved the heavy vernacularization of the Mass, Communion in the hand, lay readers, altar girls, inculturation, endless Mass "options"...and what we have is liturgical chaos with the "Latin" Church which, for all practical purposes, is the Vernacular Church.

Haven't got around to commenting on PT yet, and of course you never know when the blogmeister's going to axe your comment because it violates the unwritten rules (aka the 'spirit of Vatican II').

But JD's experience is highly unusual. Such Masses do occur in London, but by they time you reach the M25 they're pretty much gone. Beyond that, unless you have a very eccentric (traditionalist?) priest, you can pretty much forget it.

What I'm still struggling to understand is the concept that the 'reform' (I can't say it without quotation marks) is beyond reform. I accept that some people like the Novus Ordo. But why do they want to impose it on everyone else? This strikes me as a huge failure in the implementation of Vatican II--instead of saying, 'Hey, here's an alternative liturgy you can use, if you want,' they said, 'You must stop saying the old mass and you must use this liturgy instead.' How was that 'opening the windows'?

Lucky JD; how fortunate he is not to have been planted in your average North American community at the mercy of...(fill in the blank, as I no longer use names).

I spent some time today doing a Google search for John Nolan. From what he says and what others say, he sounds like some kind of a famous person.

There are quite a few John Nolans. I found: A Long Island, NY guitar player, A British actor who was in a Batman movie, another musician in Charlotte, NC, an artist, painter, in Dublin. I don't think any of these are "our" John Nolan. Can any of you help me out?

(Who's gonna say "Why should he identify himself to an "Anonymous"?) Well....I'm not famous.

Monsignor Guido Marini, Master of Pontifical Liturgical Ceremonies since October 2007 A.D., has declared that he is aware of every detail that goes into the preparation of Papal Masses offered abroad.

Monsignor Guido has also declared that he has final veto power over said Masses.

Prior to a Papal visit abroad, Monsignor Marini said that his office sends the local church a set of liturgical guidelines.

A coordinator appointed by said country's bishops' conference then coordinates with Monsignor Marini the Masses to be offered by the Pope.

Rome has final approval of any Mass offered by the Pope.

Monsignor Marini has also declared that Papal Masses are of vital important to the (Latin) Church as the manner in which a Pope offers Mass is the great liturgical reference point for local (Latin) churches.

Here is the Catholic News Service report from which I had taken the information that I had relayed in regard to Monsignor Guido Marini and Papal Masses offered abroad.

I did a quick Google search on Anonymous. Apparently it's an amorphous group of anarchist hackers and protesters who go around wearing Guy Fawkes masks. They're all mad, of course.

Anonymous, John Nolan, who appears here as a mild-mannered liturgical student/scholar and intellectual Catholic pundit, is actually an internationally feared contract assassin whose real name is Eddie Ironsights. He is for hire to governments and other agencies (possibly even the Vatican) to "clean up" situations and to deal with perceived threats to various national securities. He has even been hired to deal with simple nuisances. I understand that he is in this country as we speak, in search of one "Anonymous" who trolls Catholic blogs in order to sow confusion. Never mind precautions…it'll happen when you least expect it...

Your question was about how Mass "was to have been offered". Paul VI and JPII always followed the lead of the hosting countries. Pope Benedict began trying to turn some of this back to normality, with his new MC even overruling various local decisions. All of this has been thoroughly covered on this blog and elsewhere.

Steve, I looked at the article. I don't see this happening. What is happening now is happening in an organic way. We can't go back and pretend we haven't had 45 years of the Ordinary Form of the Mass.

Having the EF Mass will maintain our Latin Heritage as well as the patrimony of the form of the Mass. This is good news indeed.

But it adds to the plethora of options and ways of celebrating the Mass which is the patrimony of the post-Vatican II Church, like it or not.

I hope this helps. God bless.

I think having the EF available is perhaps one of the best options as it influences the reverence applied to the OF and exposes people to that heritage. I know several young men who just seem to be waiting for something to impress them and casually celebrated guitar Mass is not doing it. I would love to bring them to an EF Mass. Thanks for your comments. I'm looking forward to joining you for solemn high Mass on 3/19.
Steven

To Father McDonald and JBS, thank you for your replies.

Peace to each of you.