THE SCANDAL OF THE GERMAN CATHOLIC CHURCH! HOW DO YOU SPELL B-L-I-N-G? 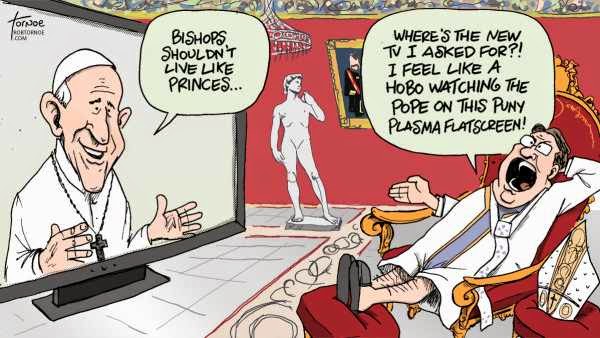 Perhaps Pope Francis should impose a severe penance on the German Hierarchy, like removing the whole bunch, including those in Germany that advocate for a rich Church that doesn't follow the Gospel when it comes to the Sacrament of Holy Matrimony? Perhaps Germany needs African Bishops?

The Roman Catholic archdiocese of Cologne published financial accounts Wednesday, showing for the first time the full extent of its worldly wealth.

The archdiocese has long been considered Germany's richest, but exact figures weren't known because the church never published its accounts. Documents posted on its website show Cologne had assets of 3.35 billion euros ($3.82 billion) at the end of 2013.

In 2013, the archdiocese received 573 million euros from church taxes paid by the 2 million Catholics living in the region around Cologne, famous for its Gothic cathedral. After adding other income and subtracting expenses — such as salaries — it generated a surplus of 59 million euros.

The archdiocese's finance chief, Hermann J. Schon, described the publication as "a big step toward financial transparency." It follows criticism of Germany's Catholic Church in the wake of a recent scandal over the former bishop of Limburg's lavish spending.

Pope Francis has stressed the need for the church to show humility and emphasize its work for the poor.

The Cologne archdiocese published its accounts on Ash Wednesday, which marks the start of Lent, the period of reflection and repentance leading up to Easter week.
Posted by Fr. Allan J. McDonald at Wednesday, February 18, 2015

I used to have a fantasy about Pope Benedict coming to America, having a large audience with the USCCB and proclaiming, "You're all fired!' (of course that would not be fair because maybe 2% deserved to keep their jobs).

Anyway, sounds like that's what Papa Frankie needs to do in the Fatherland.

Let me see if I understand the Catholic Church in Germany. Cardinal Kasper and the German Conference of Catholic Bishops and Pope Francis want to essentially change Church doctrine by allowing communion to Catholics living in adultrey. Yet they want to not only deny communion, but confession and absolution, annointing of the sick, and Christian burial to those Catholics who refuse to pay a large tax to the German bishops (all of whom make at least $7,000.00 a month......not a year, $7,000.00 per month). Does anyone see a problem. Of course not. If Francis is involved everything is just the bestest ever.

Dang, isn't it about time for the Germans to crank up and goose-step off on another insane goal of world conquest, led by some megalomaniac tyrant and his sado-masochistic automatons?

The Germans are great workers but terrible leaders, while the French are the opposite. The two nations really should come to some agreement respecting this.

JBS, we obviously have a disagreement over the definition of "great leaders."