THE BISHOP OF ROME, THE HOLY FATHER, POPE FRANCIS IS ENTHRONED IN HIS CATHEDRAL IN ROME PROPER, SAINT JOHN LATERAN 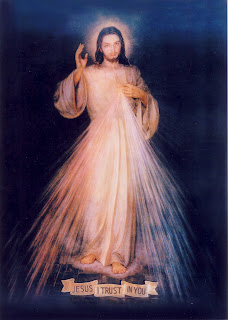 The actual Mass begins about 33 minutes into the video below, but the preliminaries are very nice too and touching! Pope John Paul II renamed the Second Sunday of Easter as "Divine Mercy Sunday" and of course he died on the Vigil of Divine Mercy eight years ago. A square in Rome was named after Blessed Pope John Paul II today as well and Pope Francis was in attendance for that.

So you will note that Pope Francis is using the staff that Pope John Paul II used throughout his ministry but inherited it from Pope Paul VI. Pope John Paul I used it as well and so did Pope Benedict for about two or three years.

HAPPY DIVINE MERCY SUNDAY! We had a Church full of people for the 3:00 PM Divine Mercy Chaplet and began hearing confessions at 1:30 PM. I finished at 4:00 PM. Both Fr. Dawid and I heard confession for 2 and 1/2 hours each! Praise God, leave the lights on and be there and they will come! Thank you Pope John Paul II for this marvelous Polish devotion spread to the whole world now!

I always thought that tortured stick was hideous and Jansenistic.

What's with the woodsy background on the blog?

All in all, just another brick in the wall.

That horrible Scorzelli Staff needed to be buried with John Paul II.

I like the staff. Sin is ugly. Crucifixion is ugly. People need to see that.