The Church will sink in her own homemade tempests! 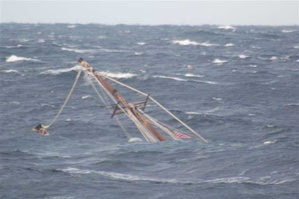 Pope Francis appeals to the Church of the Media because he is a bit more spontaneous and "ordinary" compared to his living predecessor. Therefore contrasts are being made between the two and there indeed are legitimate news worthy contrasts. But some are down right wrong.

A newspaper from Bavaria highlights the major contrasts of the two men but also shows forth the continuity between the two: "Efforts are underway to put Bergoglio in the light of continuity with Ratzinger, Drobinski says. Both are against relativism and for the truth of the Gospel. Bergoglio warns of a “worldly” church, which fits with Benedict’s desire for “desecularizing” the church."

For example, Pope Benedict often rode in an open air popemobile at the Vatican when it was warm. He kissed babies and as recently as his last Wednesday audience prior to his last day in office.

The Catholic press is making a big deal that Pope Francis will celebrate Sunday Mass publicly in the next two months. I don't know how different this is from Benedict, but I do know that Benedict went to Roman parishes, jails and other institutions regularly to celebrate Mass without much press coverage. In fact the world press was notorious in ignoring Pope Benedict. I wonder why!

I saw Pope Benedict celebrating Sunday Mass in local Roman parishes via the Vatican website and no other source, on many Sunday mornings. I was struck by how simple and ordinary these Masses were, just like most parish Masses throughout the world. Most had horrible liturgical music! One even had a large guitar ensemble in the sanctuary and almost on top of the Holy Father. He seem to be happy to be there and in that parochial setting.

Yes there are some major differences between Francis and Benedict and the pendulum of the Church is swinging once again and carrying many Catholics on an unfortunate ride that can detract from the Church's new evangelization. But I'm willing to give the new pope time as time will tell and the next papacy might have to recover things that are lost in order to jump start the new evangelization once again within the context of reform in continuity.

One would think that stability and continuity would help in this new evangelization, but I might be wrong. I am often wrong clairvoyant that I am or am I like the "Mentalist" of television fame?

"In 2005 Joseph Ratzinger described the church as a little ship threatened by the high waves of the “dictatorship of relativism.” What can a ship crew do in a storm? Shorten the sails, close the hatches, raise the ship sides, close oneself off from the danger from the outside. In 2005 Joseph Ratzinger preached hermeticism, securing of what one has, preservation of the entrusted treasure in a secure place. This is – to put a fine point on it – what his successor castigates as an “egocentric church” which “seeks Jesus within.”

The image of a church that goes to the borders of the world and human existence is not compatible with the image of a ship in a hostile storm. A church that goes to the borders risks something. It risks losing its own security. And the treasure of Catholic tradition, in view of the cries of the present day, appears as something beautiful but secondary."

Fortified from within, preserving her treasures of beauty and tradition, the Church can sail in the most turbulant waters caused not by her but by others thwarting her mission. And sail she must! 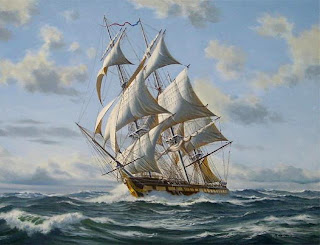 A Church fortified in her own identity, embellished with the patrimony she has inherited and unashamed of her legitimate "T"raditions and "t"raditions can go out from herself and encounter the stormy seas created by sin and division and outright hostility to Christ, His Church and His message.

It is the turbulent seas that the Church in her ever constant "re-inventing" of herself creates for herself, the stirring up of the waters she is in by her own deeds rather than that which she sales against as if an army, the Church militant" which is the most dreadful kind of turbulance, self induced!

I would suggest that it is best to build on what preceded rather than tear down. A new pope can and should create a new agenda, just as Vatican II did. Where newness and reform runs off the road and derails the best of intentions is when newness relies on the novelty of rupture rather than building on the rock of continuity. The Church's leadership made major mistakes in the 1960's and '70's with the theology of iconoclasm and rupture that engulfed the Church like the Japanese tsunami. Under John Paul II and Benedict the Church and her leadership were well on the calmer seas to "reform in continuity." I fear that those Church leaders of today my age and older didn't learn the lessons of the 1970's very well and are still enamored with the headiness of their youthful brashness of yesteryear in an unfortunate twist on nostalgia and are setting sail on the rough waters of self-created turbulence that will sink the best of intentions.

"A church that goes to the borders risks something. It risks losing its own security."

Agreed. What with Pope Francis's talking of "existential peripheries." He knows that the poor exist on many different levels, as per his homilies so far.

"And the treasure of Catholic tradition, in view of the cries of the present day, appears as something beautiful but secondary."

Really? See above. We can have the materially poor, while at the same time the intellectually and spiritually poor who feel like they are drowning in ugliness and superficiality, even at supposedly "lofty" intellectual levels.

When we live in a culture that thinks that human beings are free to redefine the criteria of love, truth, and even the human person, the Church has to reach out and "go to the borders" on *all* levels.

Which she can do, and is capable of doing, if and only if she knows who she is. Not all of the beautiful things of the Church are absolutely necessary, but beauty is not secondary, either (ad orientem worship and Communion on the tongue are far more crucial in this regard, I think, than lace albs, though I have nothing per se against lace albs. Even the poorest parish can offer those two these things, and the posture and orientation of the Mass itself is clear, even if the priest is wearing a polyester chasuble).

The Church cannot give what she ain't got, and to insist on truth, goodness, beauty, and consistency in a fragmented world that considers ugliness "edgy" and "clever" is always a risk, and there is precious little "security" in confronting a progressive, liberal mindset with those things.

When helping the poor, the Church helps them according to "man does not live on bread alone, but every word that comes from the mouth of God." I think it's more about being nourished in order to share that nourishment with others, knowing that you can't draw water out of a dry well. That's not exactly "finding Jesus within" in a battening-down-the-hatches way.