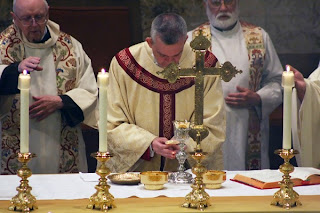 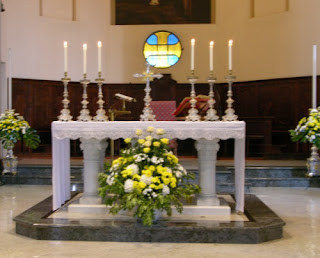 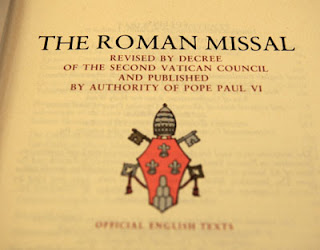 The Adoremus Bulletin has an article by Bishop James D. Conley, auxiliary bishop of Denver, who presented this address to choir members and church musicians at Queen of Vietnamese Martyrs Catholic Church, Wheat Ridge, Colorado, on St. Cecilia’s Day, November 20, 2010. Read it by pressing:
THE REVISED ENGLISH EDITION OF THE NEW ROMAN MISSAL

As I have mentioned before, no one who authentically desires to be a Catholic in union with his/her bishop and the Pope can deny the documents of the Second Vatican Council or even deny the authority of Pope Paul VI to issue a reform of the 1962 Roman Missal in the vernacular as he did in 1969 and what Pope Benedict will do on the First Sunday of Advent, 2011.

This brings me back to my post below which quotes another Auxiliary Bishop, The Most Rev. Athanasius Schneider. This is what he taught at the Vatican back in December:

Two groupings that maintain the theory of rupture are evident. One such grouping tries to protestantize the life of the Church doctrinally, liturgically, and pastorally. (My comment: I think this first form of rupture is the most insidious because it often is presented to the laity as coming from the Magisterium, the living, visible one.)

Me again: So once again I ask which school of thought do you endorse?
Posted by Fr. Allan J. McDonald at Friday, January 28, 2011

I confess that I feel great sympathy for those who reject the 2nd Vatican Council. I do not do so myself, and for the record am in the first camp in viewing V2 with continuity.

But all of the rot, decline, and decay that has come from the changes implemented as a result of V2 can not be denied. Clearly "something" has gone wrong, and if that something is the interpretations that were applied to the Councilor Documents, why in the name of all that is Holy are those interpretations not corrected? It is so easy to believe there is a little of the "smoke of Satan" in all this, and THAT is why I have sympathy for Traditionalists who reject V2. It would not be the first time in the history of the Church that a minority position was determined to be the true and faithful position of the members of the Church.

For me, and mine, we will stand with Peter.

Father, there is no way I reject the pope, especially THIS pope, since he is the very man for whom I prayed to be elected.

However, It seems like we are being presented with an "either/or" proposition here and I am asking, just asking: Is it possible that there is another way that we haven't perceived yet?

What I am getting at is something I posted about on my blog earlier: Everyone involved with Vatican II asked the faithful to pray for the Council's success. So , is it possible that a Council can be a failure? While Vatican II, in my limited grasp of things, doesn't present anything that necessarily contradicts the Church's teachings and Sacred Tradition, it seems to re-state a number of things that may not have needed to be re-stated in the first place and does so in language with enough ambiguity to cause wildly divergent interpretations. And, unlike other Councils, it defined nothing new and omitted any anathemas. So was the Council a success?

Again, I make no claim to being qualified to answer this question, but I think just about any Catholic can look at what has happened since the closing of the Council and realize it has been upheaval, division and self-destruction. Are those the "fruits" of the Council, or was it just all the heretics coming out of the woodwork to seize the moment?

I was recently reading about the Second Council of Constantinople. While, like Vatican II, it offered nothing to contradict the faith, it was, according to what I read, certainly no success--in fact, Pope St. Gregory the Great asked one bishop in a letter to simply remain silent about the Council rather than invoke it.

Does this mean there is a historical precedent for "closing the door" on a Council? I honestly don't know, but I'd like to know more. You've got some sharp people reading your blog, so maybe they or you can answer some of these questions.

Amen to that Fr. Shelton, you hit the nail on the head and offer very practical advice.

Has it occurred to anyone else that the upcoming quinquagesimal anniversaries of these Vatican II documents would be auspicious dates for the definitive papal interpretations or clarifications that Bishop Schneider has called for?