Updated Sunday morning.
Religious Blogs updates and denials of what the secular press is reporting:

The American Papist, Thomas Peters
The Pope Did Not endorse the Use of Condoms, Fr. Z's Blog
The Catholic World Report, Dr. Janet Smith
The National Catholic Register, Jimmy Akins


The book long interview by Peter Seewald of Pope Benedict is going to be "must reading!" 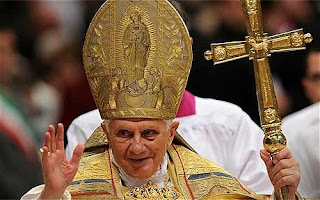 The Pope in his own words
In an extraordinarily candid interview with Peter Seewald, Benedict XVI discusses the scandals that have rocked the Catholic Church, papal fallibility, the saints he calls friends, and a fondness for old films

The London Telegraph, I think it is reliable.

And from Reuter's Alertnet. I'm not sure how accurate this is and there is a stunning acknowledgment by the Holy Father, if true, that condoms could be used in some circumstances!

The New York Times confirms the pope's remarks on condoms!

And even more from TIME! The secular press is going to have a field day with this controversial pope!
Posted by Fr. Allan J. McDonald at Saturday, November 20, 2010

In 1987, the US Conference of Catholic Bishops issues a statement on AIDS, "The Many Faces of AIDS: A Gospel Response." In their statement, the bishops recognized that living in a pluralistic society, where not all agree with the teachings of the church on sexual matters, educational efforts concerning HIV/AIDS prevention that "could include accurate information about prophylactic devices . . . as potential means of preventing AIDS" can be permitted. They further state that it is possible for the church to provide factual information without necessarily promoting the use of prophylactics.

Two years later, after much debate and disagreement among the bishops, a "corrective" statement is issued. In that statement, the bishops retract their approval of providing factual information about condoms, and state that, "The use of prophylactics to prevent the spread of HIV is technically unreliable . . . [and] advocating this approach means in effect promoting behavior which is morally unacceptable."


US Catholic Conference Administrative Board, "The Many Faces of AIDS: A Gospel Response," Origins, December 24, 1987 and "Called to Compassion and Responsibility: A Response to the HIV/AIDS Crisis," Origins, November 30, 1989

Methinks the Administrative Board who issued the original statement got it right. They cited St. Thomas Aquinas who argued that counceling the lesser of two evils could be allowed in some circumstances.

It is also possible that Cardinal Ratzinger the head of the Congregation for the Doctrine of the Faith was consulted at the time too! Intriguing to say the least.

Oh, I forgot to mention, in 1987 I lived with Bishop Raymond W. Lessard of Savannah, who at that time was the head of the Doctrine Committee of the USCCB. As I recall, he had some big heavy hitters come to our rectory at the Cathedral in Savannah to discuss doctrine issues, such as Bishop Levada, Bishop Wuerl and others of that nature. In fact I picked up Bishop Levada at the old Savannah airport. We had a great meal at the rectory, of course, I was the waiter and poured the wine! But I remember well that condom controversy back then!

NYT says it's in circumstances such as for male prostitutes. I imagine the permitted use of condoms will have about the same result as raising the credit limit on a maxed out credit card.