Click once or twice on the images below and they'll blow up, but this blogger is not responsible for damages to you or your computer! 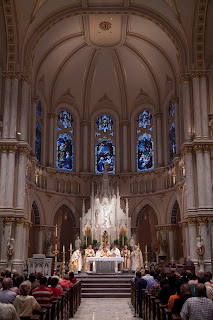 The Roman Canon prayed silently by the priest in the Extraordinary Form Mass: 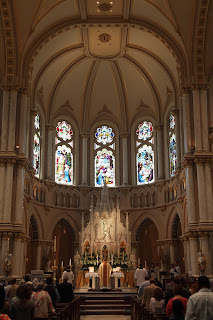 When I was first ordained in 1980, I had many older people lament that they missed the old Latin Mass, what is now called the Extraordinary Form. Most of these parishioners were in the 60's and 70's in the 1980's, so most of them have gone to their reward by now. But they spent the majority of their Catholic lives participating in the "old" Latin Mass and just a relatively few years with the OF Mass.

I would ask them what they missed about the "old" Mass. There answer was the "silence." Because of my faulty memory, I didn't grasp what they were saying to me. My normal, liberal, post Vatican II retort at the time was that the "new" Mass had silence. In fact, even in the late 70's and early 80's liturgical theologians were encouraging that silence be recovered in the Mass. When I was in the seminary, we had silences after the readings, after the homily and after receiving Holy Communion. Sometimes the silences seem to me to be never ending, like almost five minutes after the first reading! (I don't think it was five minutes, but it seem like five minutes to me!)

Unfortunately, most parishes still do not have silences after the readings, even briefly, after the homily or after Holy Communion. Pope Benedict has instituted rather long silences at his Masses, not after the readings for some reason, but after the homily and after Holy Communion. Watching his Masses on television, one begins to wonder if the pope has fallen asleep or forgotten what to do next or if time is getting away on him, but he wants silence and is modeling it for the rest of the Church.

But the silence my older parishioners in the early 80's were missing wasn't and isn't the type of silence we should have today in the OF Mass. It was silence that was built into what the priest was actively doing at the altar while joining the laity in facing the same direction. All of the priest's private prayers are prayed silently in the EF Mass. The offertory prayers are prayed in silence as well (and still may be done so in the OF Mass). But more importantly, the Roman Canon was/is prayed in silence by the priest except for a few minor words. The silence in the EF Mass is not meditation by all, but prayer, official liturgical prayer, prayed silently by the priest.

When I first started celebrating the EF Mass three years ago, I must admit I had forgotten that the Roman Canon was prayed silently. I simply did not recall that. So when I prayed the Roman Canon in a low voice, knowing that there were many people behind me whom I could not see (which in many ways is a blessing for the priest's personal piety and spiritual nourishment at Mass) I became anxious that the congregation would be distracted by all the silence, that they would see the Eucharistic Prayer only as my special prayer and not something they should join in participating by hearing it proclaimed aloud, although the EF Mass makes clear that the people do in fact join with the priest in all the prayers that are prayed, although he alone is indispensable for praying those prayers.

So in the EF Mass, the majority of the spoken prayers are prayed in a silent way. What do you think about this? Do you or would you feel excluded by the silent praying of prayers? Does this silence make the Mass appear to be the "priest's private prayer that you are privileged to watch from a distance?"

What do you think about the silences we should have in the OF Mass? Is silence a distraction to busy people of our culture where there is a clutter of sound always occurring? For example, when I retreat to my private quarters, I usually turn the TV on, even though I'm not watching it, just so there is some noise. What about that? Is noise contemplative? Is silence outdated?
Posted by Fr. Allan J. McDonald at Thursday, July 01, 2010

The silence of the EF Mass is prayerful and deeply spiritual -- many or most of the people at an EF Mass nowadays (by their own choice) are praying the Mass in the manner Pope Pius X recommended:

"If you wish to hear Mass as it should be heard, you must follow with eye, heart, and mouth all that happens at the Altar. Further, you must pray with the Priest the holy words said by him. You have to associate your heart with the holy feelings which are contained in these words and in this manner you ought to follow all that happens on the Altar. When acting in this way, you have prayed Holy Mass."

The artifical silences inserted in the OF Mass are distracting rather than prayerful. Anybody who thinks many people pray during these imposed silences is sadly mistaken.

But at least this silence is not as distracting as the noise of an OF Mass. Not to speak of the prevalent "white noise" of inappropriate music typically substituted for the prescribed propers of the Mass, listening to the audible canon is surely not prayerful for most people, more like watching and listening to a Mass on TV, as a spectator rather than as a participant.

So, speaking a one who is devoted to the OF as well to the EF, I am sorry that the OF usually exhibits the worst of both worlds.

The Silence never bothered me with one exception. When first coming into the EF Mass is is difficult if not impossible to follow in the Missal. I was lost all the time and sometimes still can not find my pace. ANd with rotating Priests saying the EF from parish to parish or week to week, each one has a different speed. So it is difficult to guage where you are in the Missal at at given point. Especially if youwould like to read the prayers along with the Priest. This is the one thing that really hinders even inner participation.I would not mind them prayed silently if there was just some way to follow. Any suggestions?

Yes. The next few times you attend an EF Mass, pay less attention to the prayers themselves than to the (red) rubrics and/or marginal notes in your hand missal.

Which tell when the priest bows (slightly or profoundly), extends, spreads, or joins his hands, genuflects or makes multiple signs of the cross.

Then begin to correlate them with the particular prayers that are "punctuated" with these gestures and postures of the priest.

Perhaps after 10 or 12 Masses, you will begin to know instinctively precisely where the priest is.

But keep at it. Don't expect it to happen in just 2 or 3 EF Masses. Remember that any truly important learning process has its moments of frustration and discouragement.

I much prefer the silence of the EF. The prayerful experience of the EF was helped along by reading a book called "The Latin Mass Explained", as well as some works by St. Alphonsus Liguori. Both of those explain the parts of the EF Mass and provide some help for the laity as far as a reference for meditation during various parts of the Mass.

Once I stopped trying to read the English in the Missal along with the priest during the EF, I fell in love with the Mass. I don't feel compelled to read along each word as the priest prays. I know the prayers generally, so they provide the basis for my personal prayer, in union with the priest. I pray with the priest, but not verbatim. More of a union of purpose and not grammar, if you will!

I think agree with the comments on participating in the EF. I'd come early to Mass with my St.Joseph Missal and look at what the introit and other antiphons are in English and meditate on them, look at the collect, secret, post communion prayers and appreciate what is there, but ahead of Mass. Because the choices for the EF Mass are so limited, everything else is what is prayed everyday, there are not options or changes. The Roman Canon is it (of course there are a limited number of prefaces that you would have to look at in English ahead of time. But you should know the gist of the Roman Canon from memory (not word for word, but structure and certainly the words of institution or consecration. The spirituality and active participation of the EF is to allow oneself to be enveloped by God's mystery and love even if you don't understand everything, but don't stop trying to understand and figure out where the priest is--Henry's answer in that regard is good.

Great post and thread/comments, very helpful and will put into practice. This just reiterates how glorious and purposeful the EF Mass and a well ordered OF Mass conjoins us to heaven. Thanks

It is my unpleasant experience that the brief silences at the OF Mass are mostly taken as an opportunity to read the bulletin or checking phones for text messages.

I LOVE the silence of the Canon at the EF. I don't have to worry about being in sync with the rest of the congregation, or the Priest. I can pray the prayers and focus on the prayers alone, and if I'm behind or ahead of the Priest a little bit, I'm sure God is capable of filtering it out. The important part is I am utterly focused on the sacrifice.

You guys have got my Irish up now! (if you read this from Ireland, how appropriate)
Excuse me for being the 'lone dissenter' here, but I think Father's first instinct 3 years ago was right!!! His praying the Roman Canon in a low voice and his reasons for it were right on spot.

Father asked: "Do you or would you feel excluded by the silent praying of prayers?"
Answer: YES

Father asked: "Does this silence make the Mass appear to be the 'priest's private prayer that you are privileged to watch from a distance?' "
Answer: YES

You see Father, your instinct to ask those questions was right, again.

But can't you commenters see why there was such a push to 'open things up' in the Church some years ago?
Henry's condescending cynical comments about people not really praying during silences at OF Masses is not completely right. Obviously he hasn't observed me at Mass. Admitedly some people don't, but perhaps some of them are regrettably not accustomed to such moments of silence during Mass and need to be instructed that PRAYING or LISTENING is what they are supposed to be doing during those moments. Also, could it be that Henry sees only what he wants to see? Perhaps if he looked again he'd notice how much prayer and reverence really IS happening in the pews. I have, and I am humbled by what I see.

Now, don't get me wrong. The loosey-goosey 70's ruined my faith and I am now loving the Reform of the Reform and finally getting connected with the Church that thrived for 2 millenia.
The overall more silent nature of the EF Mass I also prefer; and the OF Mass needs to SLOW DOWN, please, in my opinion.

I will say that Henry's suggestions for learning to follow along with the EF Mass are indeed good. That happens to be exactly how I've been doing it, arriving early.

Lastly, but NOT LEASTLY, I shall say that the EF Mass should be celebrated as it is supposed to be celebrated. Period. My (our) feelings/opinions are actually irrelevant.
SKS