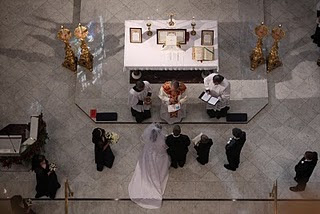 As I exercised at 5:45 AM this morning at the Macon Health Club, I was able to watch the royal wedding. How splendid! As the Archbishop of Canterbury described marriage as the relationship "betwix" Christ and His bride the Church, the camera panned to Sir Elton John and His husband. What irony! Those English! Those Anglicans! It is to laugh.

But what I did like, which Catholics have lost in the Ordinary Form of the Wedding Liturgy, is that the marriage vows are but a prelude to the main part of the Liturgy, whether it be a Liturgy of the Word or the complete Holy Eucharist in the Anglican Church (Episcopal).

In our modern Ordinary Form of the Mass, the marriage vows are celebrated now after the Liturgy of the Word and homily. So for the first half of the Liturgy, the couple is not married.

Not so in the Extraordinary Form of the Wedding Liturgy; the wedding vows like today's Royal Anglican Wedding are recited prior to the Nuptial Mass or Nuptial Liturgy of the Word. Thus the bride and groom are married for the entire Liturgy of the Word which they listen together and are instructed together as husband and wife.

The Anglicans have it right. Catholics have it half right. Let's reform the Ordinary Form wedding Liturgy and make the EF order standard. Just by two cents worth.
Posted by Fr. Allan J. McDonald at Friday, April 29, 2011

My daughter's vows, this January, were before the Liturgy and the couple brought the gifts from the congregation to the altar. The children worked closely with the parish on the ceremony, I see their hand in the use of the EF.

Then at the reception we went 'free form'.

RCG..."free form?" Did everyone get a seat in the squad car?

It was interesting seeing the icon of the Theotokos and the Orthodox Bishop in attendance. There were reports of Prince Charles' interest in Orthodoxy and visits to Mount Athos, which I understand, only Orthodox can visit.

The Catholic Archbishop of London was there too. His Cathedral is Westminster Cathedral as oppose to Westminster Abbey. Of course the abbey was a true abbey at one time and Roman Catholic, but I digress.

I was married in the Extraordinary Form back in 2003. The similarity between that rite and the Anglican rite is amazing!

W.C. you can see why Pope Benedict has created the Anglican Ordinariate and allowed Anglicans to maintain much of their beautiful liturgical traditions. Of course most of these come from the Catholic Church of the time when King Henry VIII broke England away from the papacy. However, their English translations of the Mass of the day and the Church's other liturgies were done painstakingly.

Pin, as I recall only two required immediate medical care and we are lucky enough to have several medical professionals in the family. They graciously opened their practices (which are much closer to the hall than the ER), did the required surgery, and everyone returned to dancing by 11pm. The police were very polite when they asked everypne to leave about 1pm. Since the pool at the hotel was not busy we set up targets for the Airsoft pistols (gifts from the USMC range personel at Quantico).

Fortunately the Archdiocese in KC, MO is oblivious to this history and holds the wedded couple in high regard. UFN.

On this very subject, there will be a full solemn high EF mass and wedding tomorrow in the Atlanta Diocese at St Francis de Sales. The schola will sing Gregorian chant and polyphany. The ancient liturgy lives on !!!!

I had the pleasure of visiting that church once recently for Friday evening EF Low Mass and then Benediciton & Adoration with Confessions.
It's a humble little church, but done so reverently inside. Can't wait for the next opportunity to visit the only exclusively EF church in driving distance that I know of.
~SqueekerLamb

Why was the marriage ritual changed to place the exchange of vows within the context of the mass, as opposed to at the beginning, as in the EF?

This was done with all elements concerning the Mass. For example the Asperges was a prelude to the Mass, but then it was brought into the Mass to replace the Penitential rite. The rite of Ordination had some similar characteristics as well as promises or vows at the time of the consecration of a religious. I think it was to make things look and feel more integrated, that one would be instructed first and then receive the sacrament. I do think that it might be well to revisit the thinking in this, but I don't foresee a change anytime soon.

Might placing the celebration of marriage (and other sacraments) within the context of the mass not only "look and feel more integrated" but BE more integrated?

Yes, that is the purpose to integrate the sacrament, although with Holy Matrimony this is simply a blessing of something that will occur, namely their life together as husband and wife once the ratification of the marriage takes place followed by the consummation, which hopefully is done not publicly at Mass but privately in the sanctuary of their bed. There is not reason for the ratification of the marriage not to take place prior to their celebration of the Nuptial Mass so that as a ratified couple they can together hear the Word of God for the first time as husband and wife.

And hearing the word of God as husband and wife at the marriage ceremony is preferable because...?

Really, I am just trying to understand your reasoning here.

You see no worthwhile symbolism of a husband and wife hearing the word of God for the first time as such, that they are husband and wife for the entire Nuptial Mass, not just a part of it? Those this denigrate the Liturgy of the Word? Certainly we would frown if the vows were recited after they were nourished by the Eucharist, like after the Prayer after Holy Communion, prior to the blessing and dismissal. Is there a second class citizenship for the Word, that they don't really need to be married for that, but certainly for the Liturgy of the Eucharist they should be? Just asking.

Fr, I believe this is Ignotus prating once more. Perhaps he could tell us why it would not be preferable. I am amazed he would even raise the question.

I am not denigrating anything, really. I am asking what benefit there is to hearing the Word of God as husband and wife, as opposed to hearing it as an unmarried person.

Surely if there is a benefit, we should consider the EF format. If not, then the OF form is as beneficial, or maybe better?

It is what we have in the OF and I won't change it and in fact I didn't know that there was another way to do the vows until I celebrated my first EF Mass and I though to myself, "self, this is cool!"

So, the measure of "beneficial" is "this is cool!"

Yes, you must speak the language of today's generation to bring them to Christ, although I misspoke, I should have said it was "awesome!"

While it may have no particular salvific effect, I think that husband and wife hearing the Word for the first time as man and wife is really cool, too. "Cool" is a theological term meaning, "anything that gives Glory to God and further unites His children in Faith, Hope, and spiritual strength." Like, "It was cool when they said unto me, let us go into the house of the Lord."