I LIKE THIS BLEND OF CLASSICAL AND MODERN ARCHITECTURE, I THINK 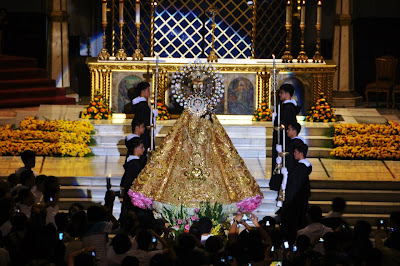 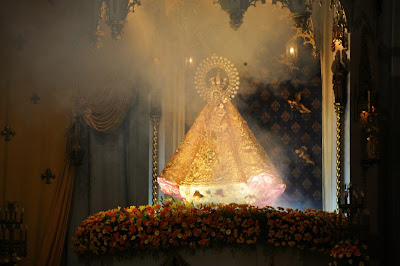 These are pictures of a church in the Philippines where they celebrated a novena of Masses in honor of Our Lady of the Holy Rosary and a navel battle where the Protestant Dutch tried to conquer the Catholic Philippines which came to be known as La Naval de Manila. I don't know the name of the church or if it is a cathedral or not. I post the pictures because of a few things that I like and don't like and isn't that the way it is?

First I love the spaciousness of the church and I love the blend of classical and modern architecture and exotic Moorish influence and furnishings. I'm not sure where the tabernacle is though, perhaps in a separate chapel? Maybe someone from the Philippines can tell us about the "Muslim" nature of the arches in this church--Venice has it also in many of its buildings.

I absolutely love the free standing altar, especially its large, long rectangular style and the Benedictine altar arrangement where the six candles and the crucifix do not hide the priest and other ministers when facing the congregation. Keep in mind this way of celebrating Mass, even if toward the congregation, is a compromise that Pope Benedict has suggested although he is quite open to ad orientem. This altar can be used for either way of celebrating Mass.

What I don't like is how the presiding chair with additional chairs are arranged so high above the altar, which itself is quite high to begin with. What is the point of having the priest at the Introductory and Concluding Rites of the Mass at the pinnacle of the Church building and so high up? It simply doesn't make since given the nature of the Introductory and Concluding Rites and that the altar and ambo are the primary furnishings of the Liturgy with the priest's chair as minor compared to the altar and ambo.

I do, kind of, like the "reredos" looking thing that Our Lady of the Rosary is placed on. It seems to me, though, that the tabernacle should be there rather than the chairs but even for the tabernacle the steps up to it are just too many and too high and look precarious to navigate and one could fall off the side and be killed instantly if not maimed for life.

I get what some theologians say about the tabernacle not being "visible" during the celebration of the Mass. I think a wonderful solution to that is to have it dead center and where the reredos is in this Church but to have a curtain or a door system that could "hide" the tabernacle during the Mass only. But before and and after Mass could be opened. In fact, the tabernacle could be revealed with an electric door or curtain opening as the priest and congregation face it at the end of the Mass for the recessional hymn and it could be closed at the prelude of the Mass.

The priest's chair could have been counterpointed with the ambo.

What do you think of these pictures? 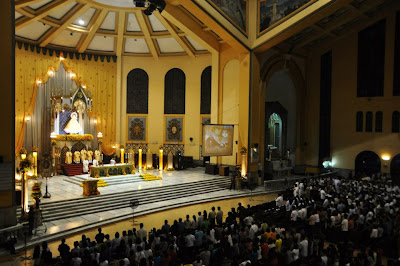 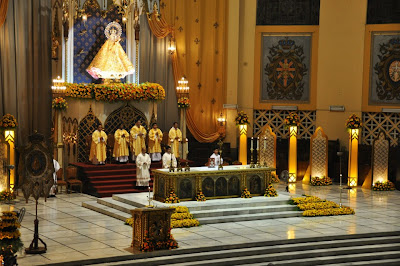 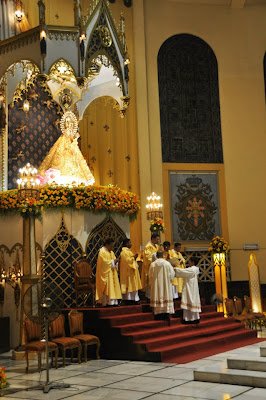 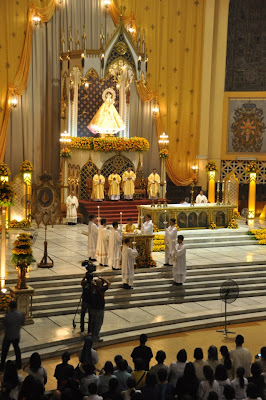 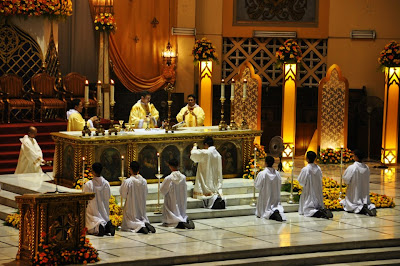 Looks a little bit like the Macon City Auditorium before the renovation...

At first I thought it was in an auditorium decorated for Mass, but I think it actually is a church designed to look like this but is really huge.

The church is in Quezon City, within the boundaries of Metro Manila. This church is named the same as it's predecessor in Intramuros, Santo Domingo. The original was destroyed under the bombing of Manila during the Liberation, the walled city of Intramuros was mostly leveled except for the Manila Cathedral and San Agustin Church.

This new church is attached to the priory of the Dominican Order. The inside doesn't actually look like this, rather it is transformed yearly for the La Naval Festivities. There are two other altars on each side of the sanctuary. The Virgin is actually housed originally to one side, but transferred to the sanctuary and enthroned (as the first photo shows). The tabernacle is also located on the same altar as the Virgin's. the other altar isinhonor of the dead Christ - Santo Entierro.

I hope this helps. Thanks for the wonderful blog and for your vocation and service.

It's quite a design hodgepodge and is not coherent.