THANK YOU AND GOD BLESS YOU PRESIDENT BARACK OBAMA 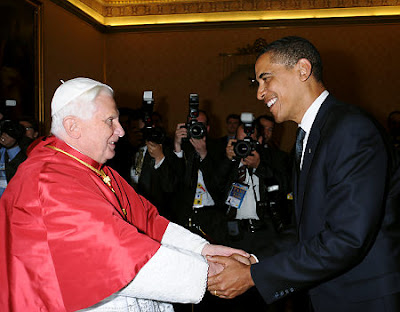 What no bishop has been able to do effectively, our President has! Thank you, thank you, thank you, Mr. President! You have helped us as Catholics to articulate our faith concerning Natural Law. Natural Law is a secular way to understand Divine Law which no Catholic should ever violate knowingly. To do so would be a deadly or mortal sin and if we remained unrepentant even unto death, we could expect a very harsh judgment from God and possibly eternal damnation for our conscious choice to violate God's law revealed in Natural Law.

What would reduce one's culpability before God and Church would be not knowing that natural law reveals divine law. Breaking divine law in that context would only be venial sin but always immoral or evil.

Pope Paul VI was besieged by liberals in the Church not to reiterate the Church's teaching that natural law reveals divine law and in fact wanted him to repudiate that infallible teaching by allowing for artificial birth control as a pastoral solution to those struggling to plan their families and support them. There was hell to pay when he issued his prophetic and courageous teaching in Humanae Vitae. He held steadfast in promoting this teaching even when liberal dissenting Catholics castigated him and marched away from the Church or ignored him and the Church altogether by remaining in the Church and receiving Holy Communion even though in a state of mortal sin to flaunt their unbelief in divine law.

The Holy Father did not cave in to these liberal's ungodly demands, unlike the Susan Komen race for the Cure did when they rescinded a sound, moral decision not to fund Plan Parenthood anymore. They were pressured to cave in by the sinister forces of our left wing political elites in the media and in politics.

So, thank you President Obama for helping the Catholic Church to rediscover Humanae Vitae as reiterating the Church's infallible teaching concerning natural law.

But also thank you for allowing us to brush up on our Civics 101 class to understand how you are now trying to undo the Constitution of the United States of America concerning religious liberty and the freedom of conscience.

Thanks for waking up our bishops and the almost 70 million Catholics of this country. We're a sleeping giant coming out of our moral and political slumber!

In the homily on Sunday, the closing thought that Father left us with was that everything is a gift. That immediately provoked me to consider in what way Obama and his actions could possibly be a gift. He is, after all, destroying the republic, and doing so with intent, and with determination.

But as you say in your headline, he has provoked us to stand up for our faith, and if this effect extends to our cafeteria friends, and to the Spirit of Vatican II population, then yes, it is a gift.

I pray it will also bring a conversion to those bishops and other priests and deacons who in 2008 rationalized their casting votes for Obama.

This is a great thought, and not one that hasn't crossed my mind on several similar topics. The Lord does perfect work with imperfect tools.

But for me, I'm old school. I'm going to stick with dispising my enemies until I've managed to trample their banners beneath my feet, unless of course they repent and seek mercy and forgiveness. I don't do nuance.

Precisely right, Father.
As a young 20's person living through that late 60s-to-early 70s turbulent time in the northeast, I can attest that as go the bishops and clergy, so go the laity. "Humanae Vitae" was openly ignored and Paul VI sometimes ridiculed (characterized from the pulpit and in the confessional as an elderly, cocooned Italian male out of touch with the "modern" world--sound familiar, anyone?) by the very clergy the Pope depended upon to be the teaching authority of the Church. Dissident theologians and social activists had a heyday. Add a few very dissident Catholic pols to the mix and, voila, the perfect storm for destroying the Church's influence on the moral underpinnings of the laity.
We are currently living the travesty wreaked and the incredibly difficult task of repairing the damage. God bless the Church militant--we'll see what God can do...

The HHS decision is also yet another object lesson that the left has an obsession with abortion (and by extension contraception) that is truly pathological, although I expect the lesson to be lost on society yet again. It is not enough that birth control be available; it MUST be available FREE, and BY LAW, with NOBODY dissenting or opting out, or else the dissenter (in this case the Church) is denying the fundamental reproductive rights of women and imposing its values on them. I have seen this fallacious argument made over and over again, and I have never seen a worse case of uncompromisingly coerced conformity in the history of the American republic.

I don't know why, sociologically, this has become such a screaming big deal with the left and with the feminists. In the early 1970s, feminism denounced the Pill as a patriarchal device to enslave women as sex objects to brutish male appetites, at the risk of causing women breast cancer. But today, the patriarchy is oppressing women by NOI giving the Pill to them for free. No written constitutional provision, including the First Amendment's Free Exercise Clause, must stand before the court-fabricated right to reproductive privacy, which has morphed into a public duty to pay for contraception and abortion.

It is really, truly, sick--pathological--defying all rational explanation.

It isn't about birth control, free sex, sex without consequences, or abortion per se. This is all another tool of the Left which is being used to destroy traditional and family values and Christian morality in order to usher in the egalitarian State and the globalist utopia. The minions of the Left do not give a hoot about these issues from a moral standpoint, Left or Right. They make a self-righteous show of secular "rights" outrage because that sounds good. "Ewwww! It is a violation of my reproductive rights! It violates the sanctity of women's bodies (while all the while the Leftist media and entertainment industry portrays women as sluts and tramps). No, it is all political. I am certain that if the preaching of abstinence and natural law would further the cause of their egalitarian ideology, they would embrace that, as well. These people are amoral...not immoral, which goes without saying, but amoral. Egalitarianism/Statism is the "X" in an indeterminate requation. And, Templar is right. Despise the enemy until they are trampled under our feet. If they have any value in God's eyes, then I am comfortable with Him determining what it might be. I can find none....