FOR MY TRADITIONAL FRIENDS OF THE LITURGY, BE CAREFUL OF WHAT YOU CRITICIZE

I actually find this altar arrangment and the decorations of the place of worship for the NC Mass very beautiful and devotional and not at all a bad example of "post Vatican II theology" for church buildings and liturgical arrangements. I especially like the size of the altar and its powerful presence in this sanctuary and would note that the Benedictine Altar Arrangement would work marvelously on it because of its massive size: 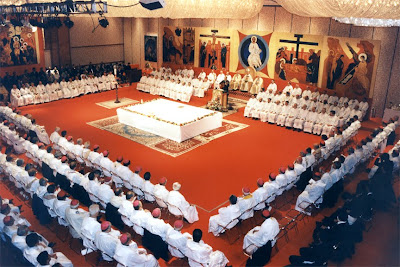 And for those who despise Pope Paul VI for what they perceive he allowed to happen to the liturgy, please note what Fr. Neil Xavier O’Donoghue, Ph.D. in Liturgy writes to a commenter at the Praytell Blog:

Nicholas, I’m afraid I see openness to life and the renewal of the liturgy in the post-Vatican II period as going hand in hand. Both were primary concerns for Paul VI, and are the two issues that many Catholics today vilify him for (rarely for both, the left does not like Humanae Vitae and the right does not like the Ordinary Form of the liturgy). However it is precisely for the openness to life and the teaching on Family Morality that is imparted by the Neocatechumenal communities that Rome’s Pontifical Lateran University on behalf of the John Paul II Institute bestowed an honorary Doctorate on Kiko Arguello, the initiator of the Neocatechumenal Way in 2009.

YOU MAY READ FATHER O'DONOGHUE'S CRITIQUE OF A CRITIQUE OF THE NW BY PRESSING THIS! I'M IMPRESSED WITH His THEOLOGY AND WOULD AGREE WITH HIM, ESPECIALLY OUR COMMUNION WITH THE HOLY FATHER AND THE CHURCH BUT IN A VARIETY OF LITURGICAL EXPRESSIONS AND SUPPORTING THE HOLY FATHER ESPECIALLY THE TEACHINGS OF HUMANAE VITAE!
Posted by Fr. Allan J. McDonald at Friday, January 27, 2012

Though, because of the seating of the congregation on 3 sides of the almost square altar--actually, it looks to me like the table they probably intend it to be--it might require 18 candles for 6 per side. And 3 crucifixes for the 3-faced Benedictine arrangement. But hopefully not the mixed-message 2-faced type of crucifix (with one corpus facing the priest and one facing the people).

Fr, this is quite beautiful and no doubt all the 'elements' are there, but what is the traditional archetype of this? I don't have a problem, per se the references in the article. However this defense comes across more like someone looking for every loophole he can find to contort the Liturgy to a certain presentation motif. If the Church came to a society where these actions reflected some sort of broader heritage, then I can see an *adaptation*. But the only one I can think of is in Macbeth Act I Scene I. Seriously, this 'Liturgical adaptation' comes across as sincere adolescence.

Nor do I do not think Pope Paul VI was conspiring to bring down the Church. For it seems that a rigourous interpretation of Vatican II is less a departure from tradition than has been pushed by those who have abused that document's latitudes. Neither am I going to second guess Arguello's PhD. But a 'pro-life' view is not a path to salvation, the Liturgy is.

In my Parish we are working a 'strategic review'. It being pushed by people who want more cowbell, guitar, and drums in the Mass so bad they can taste it. My question is simple: HOW does this help catechise the congregation vice simply entertaining them?

I am confused about that which we are to apply care to. Criticizing the Neo-Cat Way, or the Huge Table Altar.

For my part I will gladly be critical of both. The huge table altar simply because like all table altars they are unworthy of the Sacrifice, reducing it symbolically to a meal, and conveying that symbolism precisely in the manner which Thomas Cranmer intended. Any size table altar, even the one in St Peter's itself, is less dignified to the sacrifice than the most modest side altar in the most modest and humble of country churches. That's my opinion of course.

As for the Neo-Cat way, their practices have been the subject of an Italian Theological who has labeled them (their practices) heretical. I would expect a member of the organization, such as penned the article in the Blog post, to defend that which he is a part of, but from what I have read in 30 minutes of internet searches tells me there is a LOT of damning press by ex-members of the Neo-Cat Way, many of them tossing the Cult word around. It is my understanding that one of the two creators of the Neo-Cat Liturgy was quite close to, and assisted by none other than Bugnini in the creation of the original Neo-Cat Liturgy back in the 70s. Nothing good could have come from that. Again, this is my opinion.

The more I see and hear of the things that the Institutional Church turns a blind eye to, the more I believe there are diabolical forces at work within her walls. In my opinion, Catholics should recoil at these images.

You gotta agree with Fr. McDonald here, though: this is a very clear manifestation of the changes to the liturgy imagined by the post-Vatican II liturgical revisers. This is exactly the logical end of their theological and liturgical revolt. As Father said in his post, this is "not at all a bad example of 'post Vatican II theology' for church buildings and liturgical arrangements."

There's nothing "traditional" about faux Persian rugs scattered about..

William, I too thought it looked like a cake! The "building?" is hideous; it looks like a huge arabian tent complete with rugs. Are they sitting in folding chairs?

The Lord is my rock and my salvation. I'll continue to attend Mass in stone buildings with reredos and stained glass whenever possible.

"Are they sitting on folding chairs?"

Well, don't strain your eyes looking for kneelers. Or searching for a photo of them kneeling in adoration at the consecration.