THE LIVING VOICE OF THE MAGISTERIUM AND LITURGICAL DANCE

I'm back from an excellent seminar with Fr. Robert Barron. What a teacher! This video I found is helpful for those who don't really like the living Magisterium and want to go back to the dead one of the early 1940's or perhaps to the early Church Fathers, or worse yet to their own authority:

This is a good one on judgement and hell:


Now onto liturgical dance! I've written this before, like music that is added to the Mass, the Mass is the music of the Mass, meaning: The Introit, the priest's parts; the other parts that the laity respond and also join the priest in chanting: Kyrie, Gloria, Credo, Sanctus, Mystery of Faith, Great Amen, Pater Noster, Agnus Dei. The new English missal also offers the possibility of chanting the Orate Fratres and the laity's response as well as the "Lord, I am not worthy, with the priest's Ecce Agnus Dei.

Everything else that is sung is superfluous. These are sung at Mass, but are not the Mass! 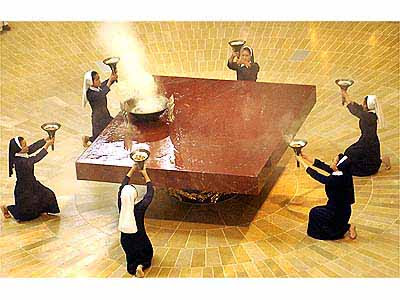 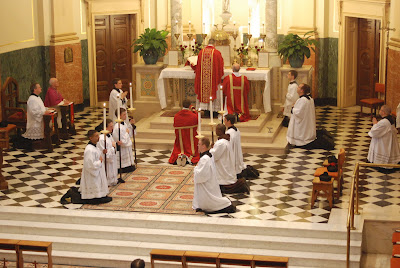 The Mass is the liturgical dance itself. By this I mean a highly choreographed dance, that is prescribed not left to the "genius" of the one dancing or his or her improvisation.

In fact, the Extraordinary Form of the Mass has more dance like characteristics than the Ordinary Form. The OF Mass is often sloppily carried out without a thought to the choreography that is required. The problem too is that the rubrics and general instructions of this missal don't have a choreography except in the most general of terms.

It is like the Israelite's dance around the Ark of the Covenant!

It would be quite easy though to bring the choreography of the EF Mass to the OF Mass especially when celebrated ad orientem!
Posted by Fr. Allan J. McDonald at Thursday, August 30, 2012

With regard to your last sentence, Father; hear, hear! We need to get away from the anti-liturgical culture which has its origins in the 1960s. The fact that many people actually like it is irrelevant - far more stay away because it repels them.

The two priorities (music and ars celebrandi) now need urgent attention. How many parishes use the Missal chants? Not many, I guess. Bishops must start taking their responsibilities seriously. At parish level the situation has not really improved; in fact some parishes which were still reasonably sound in the 1970s are no longer so.

"The horrible stuff we see in the USA that is called liturgical dance is truly an aberration and superfluous to the Mass, like music thrown into the Mass."

It is more than an aberration and superfluous. IT IS ABUSE! It is not simply something which is "thrown" into the Mass, but rather it is something that when applied literally detracts from the liturgical action.

I like the idea that the Mass is a dance in and of itself, but to not call liturgical dance abuse is to misunderstand what it is.

The Mass is not a dance, it is a ritual. It is unfortunate that someone began referring to the Mass as a "dance." I am sure it was a well-intentioned effort at poetical speech and aesthetic appreciation. However, there are people like Ignotus out there and other modernists who hate the Church as established and have abused the concept by making the Mass a sacrilege. Let's not use it anymore...

I would have to defend PI and say emphatically that the manner of celebrating the Mass is far from sacriligeous and quite orthodox. Dance is used in a pejorative sense of dance-like ritualized movement or, well dance. Maybe your former protestant aversion to dance is kicking in?

Fr, you misunderstand me. I understand that the Mass is choreographed and has a certain ritualistic elegance. However, the term "dance" has led to much abuse. I think it should be avoided. As far as your defending Ignotus, do not waste your time. There is no defense for Ignotus. LOL!

Good Father - While I appreciate your "defense" of me, it is not necessary. Those who skip mass on a whim, as Pin/Gene has admitted he does, have no standing whatsoever to challenge the orthodoxy or orthopraxis of any Catholic.