IT'S GETTING UGLY IN AUGUSTA! OR WHY YOU SHOULDN'T MAKE BILLY MORRIS MAD

In an earlier post I indicated that my college alma mater changed its name from Augusta College to Augusta State University about ten years ago or so. The other state university in Augusta, the nationally known Medical College of Georgia, founded in 1828 changed its name to Georgia Health Sciences University about a year and half ago, although it kept the "Medical College" name for that particular school within a broader university.

The two seperate state universities have just merged into one institution and there is now a "War Between the State and the Augusta Community" over the new name which is "Georgia Regents University."

Today's front page Augusta Chronicle shows how ugly it has gotten. William Morris III who owns the paper and many others throughout the country and is a multimillionaire (I was told by someone that he is "exotically rich") has gotten into the fray:

Protesting the new Geor­gia Regents University name for two combined Augusta universities, Au­gusta Chron­icle Publisher Wil­liam S. Mor­ris III, a former chairman of the state’s Board of Regents, has resigned from a board at Georgia Health Sciences Uni­ver­sity, expressing his disappointment with GHSU Presi­dent Ricardo Azziz and calling for the school to be renamed with Augusta in the title. 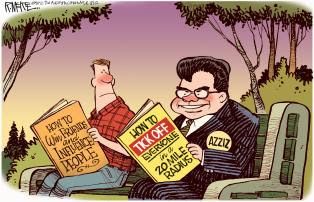 In a letter to Azziz, Morris said he regretted the move because of his and his family’s long association with higher education in Georgia. Morris served on the Board of Regents from 1967 to 1974, including a term as chairman, and his father, William S. Morris, served on the board from 1941 to 1951.

Morris said he was resigning from the GHSU Board of Visitors, to which Azziz appointed him in 2011, because of the affront the new name represents to the city of Augusta and its ties to GHSU and Augusta State University.

“I object to your ambivalence to the voice of this community,” Morris wrote. “The naming convention you have advocated, and now gained endorsement from the Georgia regents, lacks sensitivity to the enormous community good will that has been cultivated over the years. It also has no regard for the voices of both your alumni and current student body, nor the longstanding relationship with Georgia Health Sciences University (formerly the Medical College of Georgia) and Augusta State University. You seem oblivious to these concerns.”

Citing Azziz’s stated “bold vision” for GHSU, Morris wrote, “It will be extremely difficult, if not impossible, for you to carry out your mission and vision without the united support from the city of Augusta and ALL of its citizens.

“I find I am unable to support you in this recent announcement of ‘Georgia Re­gents University’ until you acknowledge, in a profound way, a willingness to listen and accept the broader historical and communal
alignment of the legacy you’ve inherited. This must include a movement by you to rename the school, including the name ‘Augusta’ in its title.”

The resignation from the board, created last year to give state and national leaders a greater advisory role to the university’s leadership, was to take effect immediately.

A scathing front page editorial in the Augusta Chronicle this morning has the following:

Editorial: What's in a name? Everything!

Seldom does The Augusta Chronicle run a front-page editorial. It does so only when the subject is of utmost importance to our nation, state or community.

This editorial speaks to a matter of critical importance to our state and to Augusta.

The Board of Regents of the state of Georgia has made a colossal error this week in choosing a new name for the combined Augusta State University and Medical College of Georgia (recently named by the regents, at President Ricardo Azziz’s recommendation, “Georgia Health Sciences University”).

The new name does not include “Augusta.” Instead, the state Board of Regents has decided to name it “Georgia Regents University.”

What a tragic mistake.

The suggested new name means nothing. It gives no recognition, or appreciation, to our city for its inseparable bond with the two institutions involved, which reaches back to the founding of the medical college in the 1820s. It’s a relationship that includes incredible support in every possible way over all those years.

What a slap in the face. And to a community that quickly embraced the state’s desire to consolidate the two schools.

There are numerous other reasons the “Georgia Regents University” name is a horrid choice, including:

– It doesn’t honor or invoke any special person, place or thing. It is, in short, completely devoid of meaning.

– Because of that, the name cannot possibly inspire the least amount of affection from students and alumni, or from the community at large.

That attachment means more than feelings; in the case of a university, it can affect the bottom line, if alumni feel alienated or simply unexcited about giving to the alma mater.

Indeed, it will alienate generations of sons and daughters who would have potentially applied to a university that was attended by their parents, grandparents and siblings. With this new naming convention, the regents completely erase the association that has motivated those very important family conversations on “where do you intend to go to school?” Alumni will have lost that connection to a university that has become of part of their DNA, and will likely not inspire their children to consider that institution as an option. More importantly, the prospect of gaining alumni contributions in the future will likely be diminished.

– Perhaps worst of all, the “Georgia Regents” name – which is wholly disembodied from its host community – completely severs a nearly 200-year bond between our community and its beloved institutions of higher learning.

Gen. Sherman would have been hard-put to do such damage.

Why go so far out of the way to avoid using the “Augusta” brand? Why would the regents not want to use the most well-known and positive name in all of Georgia: Augusta? This name is far better known than any other city or place in the state because of the wonderful and enormously successful Masters golf tournament. That event has brought positive international recognition to not only our city but also our state.

Why not incorporate it into our new school name? It brings instant good will and recognition from the beginning.

If the board’s idea was to broaden the combined school’s potential reputation, that’s a contrived and misguided concern. For one thing, putting “Georgia” in the name only serves to muddle things: There are some 16 such institutions out there already!

And, as astutely noted by The Chronicle’s Chris Gay, an alumnus of ASU, having a city’s name in the title of a university doesn’t limit its reach: think Auburn, Clemson, Syracuse, Houston, Pittsburgh, Louisville, Boise State, Miami.

The Board of Regents’ decision to cut rhetorical ties with Augusta, and to bizarrely name the school for themselves, is such an insult to Georgia’s second-largest city that Billy Morris, publisher of The Augusta Chronicle and chairman of Morris Communications Inc., has on this page announced his resignation from the Georgia Health Sciences University Board of Visitors – citing the insensitivity and ignorance the name change shows to our community, its history and its long, storied and treasured relationship with these two universities.

It’s clear Dr. Azziz, a relative newcomer, has not come to grips with where he is and the important history he has inherited. He must do so, and soon. A good start would be for him to lead a movement to rename the school to include the name “Augusta” in its title.

We urge Augustans – all Augustans – to not support or accept the Georgia Regents University name. Augusta must be included in whatever name is ultimately chosen.


These are some of the other cartoons from The Chronicle's award winning cartoonist: 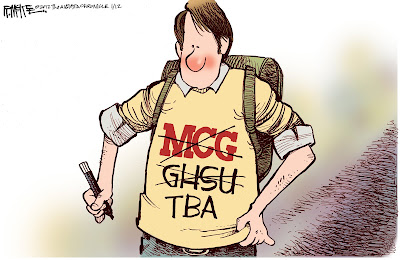 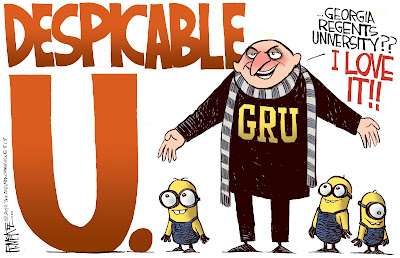 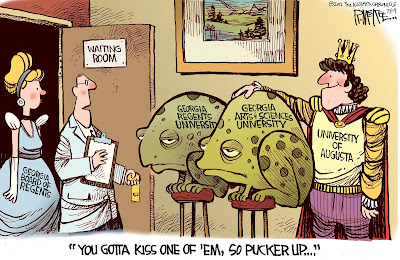 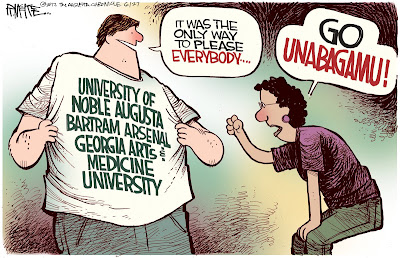 It's interesting to learn about the commotion occurring in Augusta about this issue.

I also am not pleases about the Board of Regents decisions as of late.

Here in Macon, our Macon State College is being merged with Cochran's small Middle Georgia College.

A lot of egos are being bruised and there is certainly power struggles between the colleges going on.

The cost of these mergers is way more than any 'paper' savings forcast.
It's a mess.