WHEREIN FATHER ALLAN (AS I AM NOW KNOWN) RANTS THAT THE EF MASS IS MORE ECUMENICAL THAN THE OF MASS!

As you know, I am the guest celebrant at tomorrow's 1 PM (Sunday, August 14) EF High Mass at our cathedral in Savannah, a mere 20 miles north from my cathedral, I mean, church in Richmond Hill. I have to go up to those northern Yankees and celebrate the EF for them! The normal priest there is away who normally celebrates it.

Of course in the EF, the Mass for Sunday the 14th of August is the 13th Sunday after Pentecost, not the silly nomenclature used in the Ordinary Form of the 20th Sunday in Ordinary Time.

Guess who, only two squares north of the Cathedral, is also celebrating the 13th Sunday after Pentecost on Sunday August 14, 2016?  The Episcopalians! Yes, the Episcopalians! Thus in the EF Mass and the Book of Common Prayer for the Anglicans, Sunday is a day of ecumenical bliss as both are celebrating the same Sunday after Pentecost. But this is not true in the unecumencial OF Mass on Sunday which is the 20th Sunday in Ordinary Time. How sad!

This ad is in Saturday's Savannah Morning News Newspaper. There is no Cathedral Ad to be found anywhere in Saturday's paper, but may I suggest to the rector that he should purchase one and place it next to Christ Church's ad and simply state, "The Mother Church, Established 33 AD Universally" period! 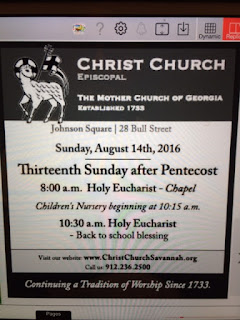 Actually, the Anglican Church (and indeed the Ordinariate) counts the Sundays 'after Trinity' since this was the Sarum Use. The epistle and gospel (see the BCP) don't necessary coincide with the same Sunday in the Roman Rite, and in any case the Church of England uses a reformed Lectionary for most of its services, which don't follow the Prayer Book.

If you go to an average Anglican Communion Service which follows 'Common Worship' you will find that it has more in common with the Roman Novus Ordo (the options, the options!) than it does with Cranmer's Prayer Book.

To use 'ecumenical' in its true sense, the Eastern Churches have never been happy with the modern (and Modernist) Roman liturgy (despite the fact that it deliberately incorporated Byzantine elements) and Patriarch Bartholomew of Constantinople welcomed Summorum Pontificum as a genuine ecumenical gesture.

The Dominican rite numbers its Sundays after the Octave of Trinity - two weeks later than the Roman custom.