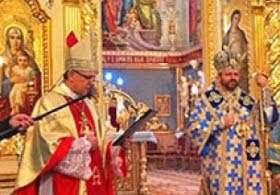 First of all I couldn't agree more with Taft or your comments. Celebrating in both Rites, Latin and Byzantine, I can't help but note that the Latin Tridentine Mass and the
Divine Liturgy are very different takes on the same reality. There is much more engagement by the deacon and the celebrant with the people in the Byzantine Rite but it is
ritualized engagement. Their personalities are left behind in favor of their ritual roles. Having celebrated the Tridentine Mass, I found it very beautiful but there wasn't
much engagement with the people. Your notion of using the new translation while keeping the chair and the readings as well as the gospel procession would solve, for me, that problem.
Of course the KEY to a more reverent celebration is the altar ad orientem. I believe with you that the revised Mass of Paul VI was an attempt to turn our churches into tasteless home settings
for a celebration which doesn't make sense in large churches and cathedrals. Suddenly we moved from the cathedral to the catacomb: a regression not a development.

The former Episcopal Priest, Russian Orthodox Priest now Greek Catholic Priest, married with bi-ritual faculties in the Latin Rite and his take on Taft and me:

Wonderful suggestions but some nuances are in order. First, the priest facing the altar (notice how it is said) is not because the priest is "praying for the people" but essentially because "we are all facing God (East)" in our sinfulness seeking redemption. The private prayers of the priest in the sanctuary (the Holy Place)are intercessory prayers for the people (including the priest). The icon screen (iconostasis) reveals and obscures IE it reminds us that "we see through a mirror dimly". Divine revelation is not exhaustive nor can we understand it exhaustively. But this is not merely intellectual-it reminds us we are creatures and there is one Creator. Consisting of doors for the processions, the screen is "held up" by the central (Royal) doors that always has the icon of the annunciation. These Royal Doors are "passed through" (Emmanuel)for the reading of the Gospel and administering Communion by the clergy and strictly for a "good" reason. The point here is that even recognized sacred space cannot be abused by clergy. Two more things. There is no kneeling except during Lent and kneeling means lowering to your knees, bending at the waist so your forehead touches the floor (I think the Muslims learned it from Middles Eastern Christians). The recognized position of servant-hood is standing at attention so to speak (the deacon chants several times during the Liturgy "Let us be attentive!)and this true even for receiving Holy Communion. There is no genuflection but bowing (a small prostration). Finally, the Tradition is that the Liturgy is always in the vernacular with some use of Greek, Slavonic or Arabic depending on the cultural origin of the jurisdiction or parish. This is not always followed especially with the Greeks where you will find many parishes using completely Greek or a few Russians using Church Slavonic (these treat the language of their cultural origins like some Westerners treat Latin!). The recognized norm is the vernacular. I think there are many points of connection between East and West. The new English translation of the Roman Missal reminds me of that (syntax!)but I'd be a little careful making too much of a "this for that" comparison. If the law of prayer is the law of belief, then the respective liturgies should reflect and support the theological and mystical emphasis of each "lung of the Church". We shouldn't be afraid of legitimate orthodox diversity.

I am fascinated by the interplay between the two manifestations of the Liturgy - the Divine Liturgy and the Tridentine Mass. Both are ancient and share very interesting similarities despite the great distance between East and West. Therefore, they are a testimony to the ancient nature of the Catholic Faith.

I would love to go to Divine Liturgy, but I have never been. Add me to the list of those willing to pack the pews if we have such an event at St. Joseph!

Marc, what I haven't done here at Saint Joseph because of the EF Mass is to celebrate the OF Mass in Gregorian Chant and entirely in Latin, which I did monthly at the Saturday Vigil Mass in Augusta. While I didn't celebrate the OF Mass ad orientem there, I wouldn't hesitate to do so here at least for the Liturgy of the Eucharist. Our Men's schola in Augusta chanted the long version of the Introit in Latin for the procession and everything else except the readings were in Latin. But it was the OF Mass. I really think that you would detect very little difference in this style of celebrating the OF if you were sitting in the congregation.
The other thing that I do want to comment on is the "human" nature of the Liturgy that the first priest suggests very powerfully and which is missing in the EF Mass--there is very little engagement of the priest with the congregation in the EF and perhaps a bit too much in the OF but there is a balance evidently in the Byzantine Rites. The suggestion that the Introductory Rites and Post Communion Rites be at the chair and the Liturgy of the Eucharist ad orientem at the altar is spot on and in fact what is done in Pontifical Masses in the EF, the bishop always goes to the throne for the Kyrie and Gloria and Collect and remains at the throne for the Credo. I'm not sure about the post-Communion Prayer and blessing though.
I find some priests who celebrate the EF Mass (and I understand Fr. Dawid does it this way) very robotic. It is here that the OF Mass and the Byzantine flows should influence the EF Mass--I do not think I'm as robotic as Fr. Dawid when celebrating the EF Mass and I intentionally try not to be.

There is certainly a ritual balance to be had, but what I am vehemently against is "making" the liturgy one way or another. That is part of why the Novus Ordo is commonly so ugly, because it is "made" to be the way it is. It is manufactured and anti-traditional, rather than just un-traditional. In fact, in practice a priest really has to try to make the liturgy beautiful in the OF, while it is mostly guaranteed in the EF.

The Easterners whined when the Latins made them kneel for Holy Communion and use other Latinizations, and rightly so! But I am going to whine because the Latins have such an identity crisis right now and are forcing all these Easternizations on the Latin faithful. It is truly criminal. The Latin Church is uber-schizo: they want to be Eastern, they want parish masses celebrated by secular priests to have "religious influence," God forbid we celebrate a Western, Roman Rite Mass with Western, Roman Rite tradition unencumbered by Easternizations and religious-izations! We are not Easterners and we are not Franciscan Brothers!

No rational trad would argue that there are not valid points in Sacrosanctum Concilium, like having the readings in the vernacular, doing the Prayer of the Faithful, etc, and respecting the Eastern traditions and letting Easterners be Easterners. But, correct me if I'm wrong, nowhere does it say, "Destroy the Roman Rite as commonly celebrated by secular Latin priests and put an amalgamation of the Divine liturgy and Western religious order liturgy in its place while only retaining vestiges of traditional parish liturgy." How silly and over-compensatory. We took the "respect the East" and ran with it and then ended up ruining our own traditions. So yes, that leaves a bit of a bitter taste in my mouth.

Let us have our Roman rubrics and our Latin language (in most places) and our COTT while kneeling with no stigma, all in the OF. :D