LET'S GIVE POPE FRANCIS CREDIT WHERE CREDIT IS DUE! 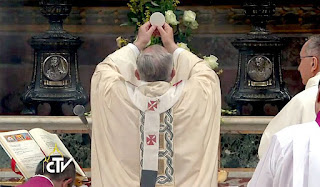 There is a lot of criticism out there of Pope Francis by so-called orthodox Catholics who don't like His Holiness's style or pastoral sensibilities. Be that as it may.

They don't like that His Holiness hasn't maintained the direction of the Church established by Pope Saint John Paul II and Pope Benedict. Be that as it may.

But let's give His Holiness credit where credit is due:

1. His Holiness continues to refer to the Feminine character of the Church, especially using the term Holy Mother Church. This is the foundation of the sacramental system of the Church, the male/female complimentarity of the Church as Bride, Jesus as Bridegroom and the true nature of Holy Matrimony in relationship to the male/female complimentarity as well as the necessity for an all male priesthood. It is based upon Jesus' teachings confirmed also for everyone, regardless of religiosity or affiliation or lack thereof, in natural law.

2. His Holiness continues to refer to the devil as a real power or reality, not just symbolic of evil or evil personified.

3. His Holiness has a powerful devotion to the Blessed Mother, more so it appears than Pope St. John Paul II or Pope Benedict.

4. His Holiness continues to encourage the recovery of popular devotions in the Church, one of the things that progressives tried to kill immediately following Vatican II.

5. His Holiness is very sober, reverent and by the book when celebrating the Sacred Liturgies of the Church. He reads the black and does the red, or something like that.

6. His Holiness has maintained the Benedictine altar arrangement although with his particular influence upon it but clearly in continuity with what Pope Benedict recovered under Msgr. Guido Marini.

All of this bodes well for the future when the next Pope recovers the complete ethos of some of those things recently abandoned as it regards "Reform in Continuity" with the Church prior to the Second Vatican Council. Reform in Continuity should not be confused with "Reform of the Reform" a misnomer of what Pope Benedict actually desired.
Posted by Fr. Allan J. McDonald at Wednesday, August 10, 2016

His Holiness is also purposefully vague on the issue of communion for people living in adultery. The Scriptures teach us "to say yes when we mean yes and no when we mean no.Anything else is from the devil"

His Holiness said that people living together outside of marriage, ie fornication, are actually in a real marriage and receive grace from God. God Himself said Thou shalt NOT commit adultery (which includes fornication outside marriage) and Francis cannot change it.

His Holiness is causing confusion and scandal by creating a commission on women "deacomesses" when the Church has already devided de fide that Sacred Ordination can only be conferred on males. (And the Church better quickly add "naturally born males" before all hell breaks loose on that issue. He is giving the impression that Truth can be changed and it can't.

He says we can'r judge people and then turns arounds and not only judges but condems people he disagrees with. He has called priests "animals". He has determined that people doesn't know that much about are not real Christians.

And the list is endless. How did this man get ordained let alone made pope?

And cue the Radicals Misrepresenting Traditonalists who will be both anonymous and pseudo named, to chime in and disagree and shame you and Pope Francis in 3, 2, 1, ....

I don't have time to address your points, but

5. You mean "says the black and CHANGES the red?" You know, like Holy Thursday?

6. You mean like his daily Mass at the Hotel Santa Marta, in the best Italian Novus Ordo style, with two candles and bunch of plastic flowers pushed to one side, not to mention ad populum?

As Father Z remarks frequently, none of this will make any difference until Pope and Church put the restoration of sacred liturgy on the front burner.

In other words, in a few areas he's doing what a pope is supposed to do. Has it come to this, that we give a pope credit for doing things that are minimum job requirements?

"Reform in Continuity should not be confused with "Reform of the Reform" a misnomer of what Pope Benedict actually desired."

Is there really a need to bend oneself all out of shape just to toe the most recent silly line out of the Vatican press office?

Benedict XVI made it very clear that he thought the reform currently in place was misguided, and therefore that what is currently place requires reform in order to bring it into continuity with tradition.

Surely that means precisely "reform of the reform". Can anyone think of a concise and similarly precise phrase that says better what Benedict envisioned?

Ok, so our current Bishop of Rome has said nothing to suggest he thinks what is in place is misguided, nor that he favors a "reform of the reform". So his vision is different from that of Benedict XVI.

Few modern Jesuits--as opposed to those in Reformation times who died for the liturgy--have ever regarded the liturgy as "the source and summit of our faith", and evidently this one doesn't either.

But why should those of us who fully accept this dictum of Vatican II abandon it just because it doesn't conform to the current Vatican press office line?

There is no distinction between the ultramontanists' conception of the papacy and that of the Protestants. The only practical difference is that the former are content with their error while the latter reject it.

John,
I am still eager to read Fr. Bouyer's book (I don't know if it's been translated into English yet)wherein he describes how he participated in the composition of Eucharistic Prayer II on a napkin one night in an Italian travestere (restaurant). Have you read of this account as well?

A fine English translation is available--search for "louis bouyer memoirs" at Amazon.

Apparently they had to cobble EP II together overnight at that travestere, lest an even worse travesty of an EP be approved at a meeting of the Consilium the following morning.

'The Memoirs of Louis Bouyer' was published by Angelico Press in 2015, a year after its publication in French. The Council and its aftermath occupy one chapter of the book. Bouyer recounts the way he and Dom Bernard Botte cobbled together EP II ('that improbable composition') on the terrace of a café in the Trastevere district of Rome so that it would be ready for the next morning as an example 'of the deplorable conditions in which this hasty reform [of the liturgy] was expedited.'

By the time he wrote this (1980s) Bouyer was aware that the authorship of the 'Apostolic Tradition' in which the so-called 'anaphora of Hippolytus' appears was being seriously questioned, and scholars no longer believe it was ever used in Rome, or even that it is meant as an anaphora.

For these and other reasons it should be excised from the Missal forthwith, and no doubt would be except for the fact that its brevity makes it the prayer of choice for clergy who are lazy or ignorant or both.

Word on the street is that MANY Republicans..."Trumpsters" are jumping ship. Anybody here going over the side?

By the way, Trastevere is a district on the right bank of the Tiber (Tevere), in those days a bit seedy. Frs Bouyer and Botte would have been sharing a bottle at a 'trattoria'.

By the way, August 13 is the one year anniversary of my throat cancer surgery. I have returned to normal weight, have been back in the courtroom since the end of last December and I am doing well. Praise be to God and thanks for your prayers. .

Only abortion lovers and other assorted fake catholics and apostates are abandoning Trump for Hildabeast. After Obama, the bar has been set so long, that a monkey can now be the American president. Cheers!
ps: I loved Loretta Young, I knew Loretta Young and YOU are no Loretta Young!

In case you missed it, the monkey comment is a racial slur, from the former "Billy the Child".
He, like his hero, Donny Trump, also threatens people's lives. Have a blessed Thursday, Gene.

Loretta, only a deeply disturbed left-wing loon would say the word monkey is a racist term. My Catholic school nuns called us monkeys all the time. We're they racist? I know lefties are always trying to find racial offense when there is none. I recall a very stupid member of a certain minority went wild when an economist referred to a budget as "niggardly." It's actually a Scandanavian term for "stingy." Also some loons went wild when they found out the complete name of the State of Rhode Island was Rhode Island and Providence Plantations. They were likely the product of a public school, union goon, "education" so they were unaware that the term Plantation in that context referred to a religious settlement. I am sick and tired of catering to the lowest common denominator in our society, of which you appear to be a member.

The left is the one glorifying violence and terror.

The Klan was the paramilitary wing of the Democratic party. They terrorized Catholics, Jews, and blacks with impunity because of the democrat controlled gun laws that kept the victim classes from the means to self defense( try burning a cross on my front lawn and we'll find out if white bed sheets are any defense to 00 buck).

Today's direct ideological heirs to the Klan use similar if less risky mob tactics to silence any and all critics of gay 'rights' and now Muslim Sharia sensitivity (see, their feelings matter more than our feelings, so if THEY get offended, why we must censor ourselves and get people fired. But if OUR feelings are offended...well....we must deserve it somehow).

The right isn't blocking traffic. The right has no analogue to 'sanctuary cities' whereby federal law is not enforced. The right isn't agitating for giving felons the right to vote or eliminate any and all safeguards to keep non-citizens from voting.

Note the useful "dialogue" "no pressure". But the penalty for noncompliance is instant execution. You think these ideas are not percolating in the US Left as well as their European (and English speaking at that) brothers in arms?

So the left has violence at its core and has been openly talking about "the revolution" for a generation. I suspect they will first disarm the right before going for broke which is why they're so vehemently for gun control. It's no fun burning crosses when the victims are capable of self-defense.

See, we're all supposed to cower before the Caliphate and cower before the western secular hedons, begging them for scraps and the privilege to be left alone. The last thing either the Caliphates or the secularists will put up with are confident, self-sufficient, manly Catholics who won't kow tow to their demands and won't burn a pinch of incense to their bloody gods.

Jusad, it is anecdotal, but I agree with your claim about the right's relative tolerance for opposing views. In the election about hanging chads I recall the next day discussing the recount with a coworker who is a devoted Red. He was literally in tears of fear of the white people in polo shirts and khakis that were chanting slogans outside the voting station in Florida. The day before he had been bragging about how anarchists would throw ballbearings at crowds in 19th century Austria. "They knew how handle opposition!" My wife does not ever put a sticker on her car lest it get vandalised when she parks down town.